3 Questions: Johannes Haushofer on the psychology of poverty 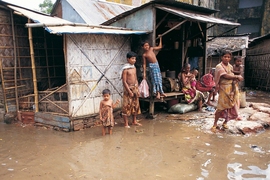 The World Health Organization has estimated that 1.5 billion people live on less than $1 a day. One of the mechanisms through which poverty perpetuates itself may be psychological: Being poor seems to create greater levels of stress, negative affect, and depression, which themselves can lead people toward short-term, risk-averse decisions, constraining their ability to find a long-term path out of poverty. Johannes Haushofer, a postdoc at MIT’s Abdul Latif Jameel Poverty Action Lab, is co-author (with Ernst Fehr, an economist at the University of Zurich) of an article in this week’s issue of Science examining the evidence on this feedback loop. To be sure, Haushofer notes, there are great material constraints on the very poor, and additional good reasons for the poor to be risk-averse, such as limited access to low-interest borrowing. Still, he asserts, we can learn much more about the psychological condition of the very poor.

Q. What is the hypothesis that you and others are exploring about the psychology of being poor?

A. Our question is if poverty has psychological consequences, even neurobiological consequences, which in turn affect the way people make economic decisions. If you put those two links together that might be one way poverty perpetuates itself — through psychological channels. That’s not to say the poor are somehow intrinsically deficient, or to blame for their poverty. It’s saying precisely the opposite, in fact: It’s asking what the power of the situation is to cause certain types of behaviors.

Poverty changes so many things about people’s lives that it would be a bit surprising if it didn’t also change the way [people] think. It seems like a no-brainer that poverty causes stress, and that stress may affect economic choices, but it turns out we didn’t really have a very good answer to that until very recently. The research I, and others, have done over the last couple of years has tried to make a dent in these questions.

Q. What is the evidence for this?

A. There is now a growing number of studies showing that … within and across countries, poorer people tend to be more stressed and have higher levels of cortisol, which is the body’s main stress hormone, than richer people. But, of course, we want to understand if this is a causal relationship due to changes in income. One way of doing this is to make people less poor, to see if they become less stressed. The other is to find situations where people become poorer. Obviously that’s not something we would do in an experiment, but unfortunately there are sometimes events that make people poorer.

Both increases and decreases in income turn out to both affect stress, in opposite directions. My co-author Jeremy Shapiro — an MIT economics PhD student — and I did a randomized, controlled experiment in Kenya where we gave people $700 with no strings attached, almost their yearly income, and asked if they were more or less stressed. … We saw improvements in happiness, reductions in stress and depression, and decreases in cortisol levels for some types of transfers.

Other people have studied this question using lotteries. There is a very nice recent study from Sweden, which shows a decrease in the consumption of [mental-health drugs] after people win the lottery.

Conversely, my colleagues Matthieu Chemin and Joost de Laat and I did a study in Kenya of farmers who experienced negative income shocks through drought. We observed increases in levels of both self-reported stress and cortisol. So it looks like there’s a causal effect there.

Now, on the effect of stress and negative emotions on decision-making, there’s a growing body of evidence showing that stress makes people more risk-averse and more impatient. Jennifer Lerner at Harvard has done a series of landmark studies on this question. In one really nice experiment, she and her co-authors showed that making people sad makes them very impatient. Sandra Cornelisse, Vanessa van Ast, Marian Joels, and I did a study where we give people a pill that raises cortisol levels in the brain and we find that this, too, makes them more impatient.

Similarly, a number of studies show that stress increases risk-aversion: For instance, Anthony Porcelli and Mauricio Delgado showed that stress induced by mild physical pain makes people prefer rewards that are safer, not riskier. And Narayanan Kandasamy used the pills I described above to raise cortisol levels, and also found that people are [then] more likely to choose the safe outcome.

If you put this together, it suggests that by virtue of being poor, you’re stressed, and if you’re stressed, you’re even more risk-averse and impatient than you otherwise would be. That’s an additional factor that may keep you from investing in long-term outcomes, like education, health, fertilizer, and so on.

Q. Where would you like to see more research in this field?

A. There are two main areas where I’d like progress to be made. The first is: You don’t want people to be unduly stressed or depressed. These are welfare outcomes in their own right. I would like to see more interest in measuring psychological well-being directly, both through questionnaires and these biomarkers we now have. The second thing is that if this feedback loop exists, we want to break it. There are three natural places you can attach levers. You can try to alleviate poverty [through cash transfers, for instance]; you can try to improve decision-making through small nudges to behavior; and you can address the third component, stress. On the third of these points — the effect of alleviating stress on poverty — there is very little work, and this is an area where we urgently need progress. Once we have an answer to this question, we can choose the intervention that’s most effective. For example, one day we may look at the evidence and say, “OK, it looks like alleviating stress [directly] doesn’t do as much as just giving people money.” Then we’ll have learned something.