How can crowdsourcing help plan your next vacation? How good are government officials at living up to their promises? And who among the millions of students taking online courses are likeliest to drop out?

These are all questions researchers are tackling in MIT’s Department of Electrical Engineering and Computer Science (EECS). But the researchers heading up these projects aren’t faculty members or graduate students — they’re undergraduates who are making discoveries in fields like web security, bioinformatics and motion planning while balancing problem sets, campus activities and, for many seniors, job interviews. 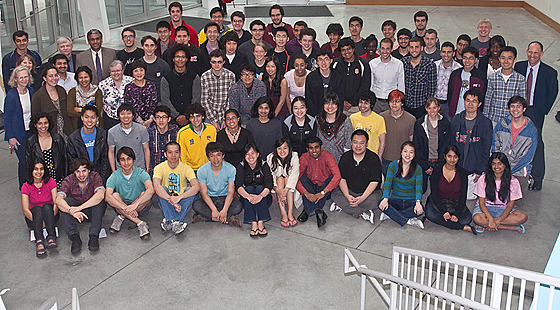 Seventy-seven SuperUROP students were given certificates as class members, administrative and teaching staff gathered on May 9 to celebrate the program's inaugural year.Photo: Bethany Versoy

These undergraduates — 77 juniors and seniors majoring in EECS — are the first to complete a program known colloquially as “SuperUROP,” a play on MIT’s longstanding Undergraduate Research Opportunities Program (UROP). The program, created by EECS, immerses students in a yearlong innovation incubator.

Over the course of two semesters, students accepted to the program work as members of research labs on campus, and are put in charge of developing an aspect of a group’s project or prototype. They are also given access to facilities that would otherwise be open only to graduate students.

In addition to spending at least 10 hours a week in the lab, SuperUROP students take a class, “Preparation for Undergraduate Research,” where, among other things, they learn to distill their research into concise pitches aimed at audiences including fellow students, engineers, industry executives and venture capitalists.

“We are teaching them how to explain concepts at a deep technical level, but also at the 10,000-foot level,” says EECS department head Anantha Chandrakasan, the Joseph F. and Nancy P. Keithley Professor of Electrical Engineering. “With this skill set, I believe these students are much better prepared to build toward an academic career, a job in industry, or take risks in starting companies.”

Last week, students made their final in-class pitches, distilling a year of research into 90 seconds for an audience of their peers, course instructors and industry sponsors.

Senior Lyne Tchapmi Petse initially applied to the program at the urging of her advisor, Charles Sodini, the Clarence J. LeBel Professor of Electrical Engineering. Petse had already been working on a research project with Sodini, and saw the SuperUROP program as an opportunity to dive deeper into her project: developing an earpiece that monitors and sends vital signs to a smartphone for doctors to analyze. In class, Petse found additional resources in guest speakers.

“You get to meet a lot of people in different fields — from industry, graduate school and academia,” says Petse, who hopes to join a startup and work in educational technology and international development. “The project has given me a lot of insight into my future career choices.”

“It was probably the closest I’d ever gotten to a professor,” Graves says. “You can go to office hours, but it’s not really the same as actually working with them and trying to solve a problem together. It was a good opportunity that I don’t think I would’ve gotten otherwise.”

The program has drawn support from 14 industry sponsors, including Google, Qualcomm, Intel and Analog Devices. Representatives from these companies served as mentors for SuperUROPS, sharing their expertise throughout the year.

“MIT is known for its innovative, leadership role in developing engineering education,” says Dennis Buss ’65, PhD ‘68, the chief scientist at Texas Instruments and a SuperUROP mentor. “The SuperUROP program is an example of such an innovation. It challenges undergraduate students to achieve goals in research that are unprecedented in my experience. The students are to be commended for rising to the challenge.”

“Without the influx of fresh college talent, if you will, the long-term prospects [for innovation] get tricky,” Metral says. “We really wanted to raise our profile on campus and be involved in research that was pushing the envelope much further.”

From UROP to SuperUROP

The SuperUROP initiative is an extension of MIT’s UROP program, which started in 1969 and currently attracts more than 80 percent of MIT undergraduates to work for a semester in a research lab.

Senior Rui Jin has been participating in UROPs since his freshman year, working as a member of Chandrakasan’s lab. Jin says that while he learned from each UROP experience, he saw SuperUROP as a more immersive research experience.

“I wanted something that would allow me to channel the research interests I had into a more focused, productive project that would have major results,” says Jin, who has built a chip that can be integrated into a smartphone to wirelessly charge cochlear implants and other medical devices.

For students considering a SuperUROP, Jin advises “diving into the UROP program first to get a sense of what kind of research interests them, before taking on a more focused project. … It’ll make for a more rewarding SuperUROP experience.”

MIT Chancellor Eric Grimson was on hand to congratulate and encourage members of the inaugural SuperUROP class, who received certificates of completion from instructors.

“This is absolutely a spectacular program,” Grimson said. “It really meshes well with MIT’s broader goals around education. You get great skills in terms of knowledge acquisition, and you also get great skills outside the classroom.”

In brief remarks, Grimson noted the impressive range of projects helmed by undergraduates.

“I know for a lot of you, you’ve learned how to import ideas from other disciplines,” Grimson said. “[EECS] is one big department for an important reason: It blurs across so many boundaries. That’s a tool that’s really going to help you when you carry on.”