An entrepreneur aims to work in Africa

Caption:
Sarah Dimson
Credits:
Photo: Allegra Boverman
On the long, bumpy drive to her grandmother’s house in Accra, Ghana, seven-year-old Sarah Dimson began to notice some stark disparities between her home in Norman, Okla., and the country of her parents’ birth. The car hit pothole after pothole, and the lights in her grandmother’s home didn’t come on at the flick of a switch.

“That experience has lived with me for quite some time,” says Dimson, now an MIT graduate student in urban planning with a specialization in international development. “It was the seminal moment when I really started to realize the stark differences between the U.S. and the developing world.” 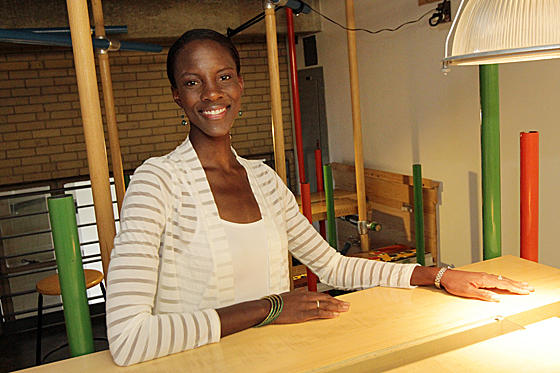 Dimson is determined to make a difference of her own. With the support of a fellowship she recently received from MIT’s Legatum Center for Development and Entrepreneurship, Dimson will found a real-estate development and energy-infrastructure company in Tanzania after she graduates from MIT next year. Her vision is to provide grid and microgrid-scale renewable energy and affordable housing to regions across sub-Saharan Africa.

“The company has been my brainchild for a number of years,” Dimson says. “The next two years are going to be extraordinarily busy and challenging, but I’m thrilled and excited, and I feel as though I’m definitely in the right place to be able to launch a company.”

Shortly after graduating from Stanford University in 2002 with a degree in science, technology and society, Dimson worked in Los Angeles for an affordable-housing developer and cultivated an interest in energy sustainability. In 2009, she was named an Acumen Global Fellow and worked in Lahore, Pakistan, for a year — an experience that solidified her commitment to work in the developing world.

“What I really loved about Pakistan, and part of the reason I’m committed to working in sub-Saharan Africa, was that there was a challenge at every single turn, and we had to come up with creative ways to get work done,” Dimson says.

Dimson’s experience in affordable housing and the developing world assures her that there will be plenty of challenges in the future. For one, her company’s customers will have limited financial resources.

“We’re talking about the working poor who are just at the cusp, who need access to credit, who are working and living from one informal paycheck to the next,” Dimson says. “The pricing is really difficult; affordable housing is complex, especially when people don’t have access to credit and private-sector investment in sub-Saharan Africa is limited.”

Another big challenge comes with the renewable-energy side of her company: Tanzania recently discovered huge amounts of domestic natural gas, which could drastically change its energy market in coming years.

“I have to figure out how to make the sell for renewable energy if Tanzania decides that natural gas is going to be a major electricity-generation source,” Dimson says. “Tanzania has already made a commitment to incorporate renewables, but trillions of cubic feet of natural gas sort of changes the game a bit.”

“The timing is impeccable,” Dimson says. “Power Africa provides a strong political platform that will draw more attention to electricity-access issues and will hopefully catalyze greater private-sector investment — something that my company will absolutely need as it seeks to be a leader in sub-Saharan Africa’s renewable-energy sector.”

Dimson sees access to electricity and housing as a critical link to human progress. “To me, electricity provides families with opportunities to improve their lives: They can conduct businesses from their homes, keep the lights on at night to read, preserve food and do so much more,” she says. She contends that homes need to be imagined and built in a way that supports technology, like electrical systems, and respects culture and the natural environment.

To help lay the groundwork for her startup and allay potential difficulties, Dimson has been building relationships in Tanzania for the past two years. In January, she worked as an intern for the regional commissioner of Mtwara, a region in southeastern Tanzania. “Working with the government gave me really great insight into how they go about the planning process,” Dimson says.

Despite the inevitable obstacles, Dimson looks forward to learning as much as she can through her master’s degree and digging into the details of her company. “I am someone who very much likes a challenge,” she says. “All this stuff is really hard, but at the same time, I think it’s where I derive the most joy.”

Dimson hopes to draw others within the MIT community in to the conversation about energy and development issues. With the support of the MIT Energy Initiative, Dimson and fellow graduate student Yael Borofsky hope to launch a new speaker and student-presentation series this fall.

The future in Tanzania

Soon after she receives her master’s degree in June 2014, Dimson plans to move to Tanzania and begin implementing her long-contemplated business plan. Though she will start small, Dimson has big dreams for the firm.

“I want the business to be one of the leading producers of renewable energy in sub-Saharan Africa, and I want our real-estate developments to be of the highest quality as well,” she says.

Dimson is traveling from afar to start her company, but she will be looking locally for inspiration. “One thing that I have realized is that there is a tremendous amount of ingenuity and innovation in the people we are often trying to serve in developing communities,” she says. “It’s about how to empower people. Energy and proper housing are just tools for something much greater — and that, for me, is people’s livelihoods and their dignity.”