“I always loved building things,” he says. “For my birthday presents, I’d get remote-control cars and kits, and I once tried to make myself a hovering magnetic car — it didn’t work,” he chuckles.

Lazarescu was born in South Africa, where his father had emigrated, by way of Israel, after fleeing Romania’s Communist regime in the 1960s. When he was four years old, his family moved to southern California, where Lazarescu and his two siblings grew up.

Now a mechanical engineering major in his senior year at MIT, Lazarescu is on the way to achieving his childhood dream: He’s designed a hand exerciser for stroke rehabilitation, a wheelchair attachment for off-road travel, and a structure for mounting NASA sensors on airplanes. 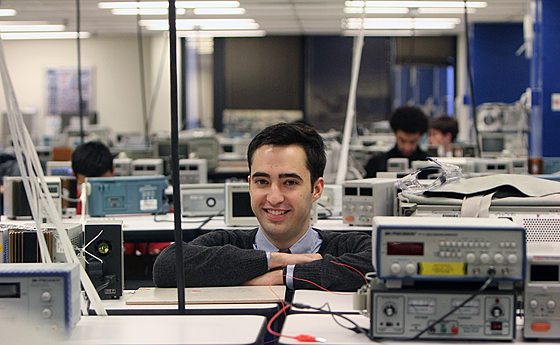 When he’s not busy with classes and internships, Lazarescu spends time with his fraternity brothers in Alpha Epsilon Pi, where he recently finished a term as vice president, or practicing one of his many hobbies: juggling, blacksmithing, scuba diving, playing the guitar, breakdancing, and krav maga, an Israeli system of self-defense. “I love learning new things and picking up random talents here and there,” Lazarescu says.

One pastime Lazarescu never thought he’d try was wheelchair basketball. But the summer after his sophomore year, he found himself in a small town in Guatemala, huffing from one side of the court to the other in a game. “There’s me chasing this group, and they just keep on passing me,” he says, laughing.

Lazarescu and another MIT mechanical engineering student, Rachel Dias Carlson, had received funding from the MIT Public Service Center for travel to Antigua, Guatemala, to work on low-cost, rugged wheelchair designs. “I knew it was going to be a great experience, but I didn’t realize how much I would change throughout that experience,” Lazarescu says.

Most of the members of their partner organization in Guatemala were themselves in wheelchairs — some due to polio, many due to gunshot wounds. “There were some of the most unbelievable guys there,” Lazarescu says. “They’ve been building wheelchairs for the past 10 or 15 years. They’re some of the most positive, friendly, warm people that I’ve ever met.”

Lazarescu worked on a low-cost attachment to allow off-road travel: a large wheel that attaches to the front of a wheelchair. “It’s like a little bike tire; you can go on gravel and everything that the little wheels wouldn’t be able to deal with,” he says.

In the United States, such an attachment costs around $500, far out of reach for poorer populations in Guatemala. “In the end, we made something that could be produced and sold for $50,” Lazarescu says. “We gave it to Luis, one of the guys in a wheelchair, to try out.” The attachment halved the duration of Luis’ commute across the cobbled streets of Antigua.

“We didn’t mass-produce wheelchairs or save the entire world, but if I can make one guy’s trip to and from work in his wheelchair that much easier, I feel like I came away with an actual accomplishment: I contributed positively to his way of life,” Lazarescu says.

Back in the United States, Lazarescu found another wheel-inspired way to help people: Later that summer, he worked at the University of California at Irvine, where he helped design a device that employs a spinning wheel to help stroke victims recover their ability to grip with their hands.

“Many people who have had strokes have issues with opening their hands and other things that we take for granted, like holding a pencil or picking up their keys,” Lazarescu explains. The wheel on his device connects to a handgrip, and the spinning of the wheel opens and closes the grip. A patient holding the handgrip could then practice timing the opening and closing of his or her hand to match the spinning of the wheel.

Sensors in the sky

The following January, Lazarescu’s attention shifted from the ground to the air. As an intern at NASA’s Goddard Space Flight Center, he worked on designs for attaching two microwave radiation sensors to an airplane that would fly over ocean and land to measure salinity and water content, respectively. As Lazarescu’s supervisor at NASA, Edward Kim — the inventor of the sensors — liked to put it, the sensors measured “wet dirt and salty water.” The data from the sensors would then be used to calibrate a similar sensor on a satellite currently in orbit.

“He gave us two sensors — one was shaped like a Coke can on its side, and the other like a flat octagon — and told us, figure out a way to attach both of these to the bottom of a plane,” Lazarescu says. He and a fellow MIT student designed an attachment that bolted into tracks inside the cargo hold of the plane, allowing the sensors to hang outside the plane with a clear line of vision to the Earth’s surface.

Although he loves engineering, Lazarescu has also nurtured an interest in business during his time at MIT, founding an investing club during his junior year. After graduating this spring, he’s going to work at consulting firm McKinsey & Company as a business analyst. One day, Lazarescu hopes to create his own startup, “an engineering, cutting-edge company that makes a big impact through inventions and innovation,” he says.