More than 200 years later, environmentalists have adopted Coleridge’s famous line in describing growing water shortages around the globe. David Cohen-Tanugi, a PhD student in materials science and engineering at MIT, sees opportunity in desalination, the removal of salt and other minerals from saline water to make it suitable for consumption and use by humans, including in agriculture.

“I’ve always been committed to the environment,” says Cohen-Tanugi, a native of Paris, “but I had never really thought of it as a career before.” 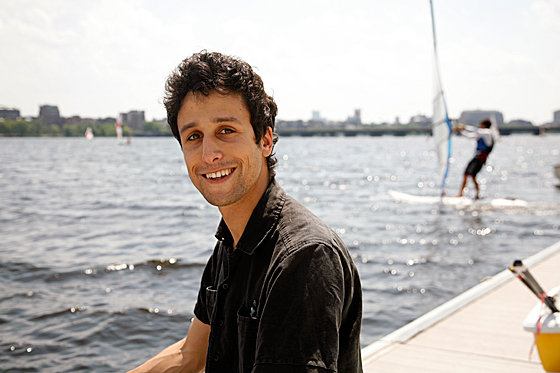 As an undergraduate at Princeton University, Cohen-Tanugi studied physics and East Asian studies. Interestingly, he found water technology to be at the intersection of these two interests.

While at Princeton, Cohen-Tanugi had the opportunity to live in China on two different occasions. The first time was a summer spent volunteering as an educator in rural China, teaching philosophy, French and physics. The second time, also during a summer, he worked for the National Resources Defense Council (NRDC) investigating the effects of urban planning on traffic congestion in Beijing.

“There was something about not seeing the sun for nearly two months on end, on account of all the smog, that made me realize that I didn’t want the rest of the world to experience that,” Cohen-Tanugi says.

During a subsequent visit to China, as an NRDC China Climate Fellow working to coordinate efforts between the United States and China to address climate change, he observed that “China sees the potential in desalination … because they are becoming more and more sensitive to the stress of the lack of water.”

A new role for graphene

Having observed the world’s most populous nation positioning itself for innovation in the water sector, Cohen-Tanugi started to see opportunities in desalination as well.

Since enrolling at MIT in 2010 and working with Jeffrey Grossman, the Carl Richard Soderberg Associate Professor of Power Engineering, Cohen-Tanugi’s focus has become engineering better filters or membranes to purify saline water.

“The better your membrane, the less energy you will consume in the process,” Cohen-Tanugi says. “The thinner the membrane, the more water will go through and help with efficiency of the desalination plant.”

Using computer simulations, Cohen-Tanugi has experimented with graphene: a very thin, yet strong, material whose small pores can be “tuned” to allow more water in, while still blocking impurities. These tiny nanopores, produced using methods such as chemical etching and hydrogen ion beam drilling, could actually turn graphene into an ultrasensitive filtration tool. In contrast to current polyamide-based filters, graphene filters could drastically reduce both the amount of salt in water and the energy required for desalination.

While graphene has been used extensively in electronics, Cohen-Tanugi says there has been little work on graphene-based filters for use in desalination. Once the efficacy of these graphene filters has been established, Cohen-Tanugi hopes that they might be added to desalination facilities like the one under construction in San Diego that will rank, upon its completion, as the largest in the Western Hemisphere.

“The idea behind such filters is that a big plant will do the initial treatment of saline water and then it will go to regular water facilities for distribution,” he says.

As part of his research on desalination, Cohen-Tanugi was part of an MIT International Science and Technology Initiatives (MISTI) trip last December to Israel, where he learned more about how that country puts desalination technology to use.

“They rely a lot on desalination and have alleviated a lot of their water problems,” Cohen-Tanugi says. “They don’t consider themselves in a permanent water crisis anymore, and a lot of it has to do with their infrastructure post-water treatment.”

For example, Cohen-Tanugi describes how roadside flora is irrigated in Israel: “The trees had a network of pipes around their base that would feed them with water that had been treated. It wasn’t a sprinkler that aimed in a general direction or even a person who watered it, but a very focused, conservative system that kept the tree watered.”

There is still the issue of the amount of energy that desalination requires, which is another avenue to consider, according to Cohen-Tanugi. “Desalination has only been around for about 50 years, and there is much room for improvement,” he says.

Cohen-Tanugi also serves as the president of the MIT Water Club, a network of individuals who are working in the water sector. “We bring together students, researchers, investors, people from the policy end and entrepreneurs to talk about water issues,” Cohen-Tanugi says. “It helps connect people from different fields to address the problems of a common resource.”

Cohen-Tanugi hopes, upon completing his PhD in about two years, to find a position where he can continue to apply technical insights to environmental issues — as well as a way of engaging his fascination with East Asia.