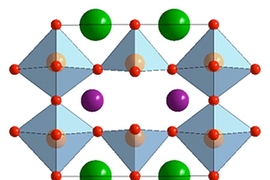 ↓ Download Image
Caption: A diagram of the molecular structure of double perovskite shows how atoms of barium (green) and a lanthanide (purple) are arranged within a crystalline structure of cobalt (pink) and oxygen (red).
Credits: Illustration courtesy of the researchers

Caption:
A diagram of the molecular structure of double perovskite shows how atoms of barium (green) and a lanthanide (purple) are arranged within a crystalline structure of cobalt (pink) and oxygen (red).
Credits:
Illustration courtesy of the researchers
MIT researchers have found a new family of materials that provides the best-ever performance in a reaction called oxygen evolution, a key requirement for energy storage and delivery systems such as advanced fuel cells and lithium-air batteries.

The materials, called double perovskites, are a variant of a mineral that exists in abundance in the Earth’s crust. Their remarkable ability to promote oxygen evolution in a water-splitting reaction — which breaks water molecules into oxygen and hydrogen — is detailed in a paper appearing in the journal Nature Communications. The work was conducted by Yang Shao-Horn, the Gail E. Kendall Professor of Mechanical Engineering and Materials Science and Engineering; postdoc Alexis Grimaud; and six others.

The performance of this family of materials, Shao-Horn says, is a step forward from the previous record-holder for a catalyst that promotes electrochemical water-splitting — a material that Shao-Horn and her team reported in a paper in Science two years ago. In addition, while the earlier material quickly changes structure during water-splitting, the new material is stable.

Splitting water into its constituent elements could be a significant boon for renewable energy sources, such as wind and solar, whose output is highly variable. Using a catalytic system, electricity from a solar panel or wind turbine can be fed into a container of water, and the streams of oxygen and hydrogen produced by splitting the water molecules can be collected in separate tanks. Then, when the power is needed, the two gases can be recombined, such as in a fuel cell, to produce water and electricity.

This method is well understood in principle, but to make it economically viable researchers must find catalysts that are inexpensive, easily manufactured and efficient enough to carry out the conversion without losing too much of the original power. The new finding could be a significant step in that direction, the MIT researchers say.

The specific compounds used in this research were made by combining a lanthanide (praseodymium, samarium, gadolinium or holmium) with barium, cobalt and oxygen. These compounds form a crystal structure with one distinct site for barium and another for the lanthanide. “There’s lots of flexibility in the chemistry and structure,” Shao-Horn says, allowing for a wide variety of potential materials.


Video shows the strong activity of the new catalyst material (dark circle at center) in promoting the oxygen evolution reaction when submerged in water, as revealed by the bubbles of oxygen forming on its surface.

While Shao-Horn and her team had previously reported the effect of transition-metal ions such as cobalt or iron on a water-splitting reaction, this work demonstrates how changing the specific lanthanide element has a strong effect on how rapidly oxygen is produced from the catalyst, Shao-Horn says. In their tests so far, the catalyst using praseodymium had the greatest activity level of any material tested to date, the researchers report. And, unlike most of the other materials tested in this reaction, tests indicate that this one is stable under repeated use.

In addition, because this represents a new family of compounds for water-splitting, the MIT researchers predict that further research could lead to more-active catalysts. “We figured out what physical parameters could control the activity and stability” of the compounds, Grimaud says, providing guidance for future research. These compounds could find use in fuel cells, advanced rechargeable metal-air batteries, and direct-solar splitting of water, they say.

While some kinds of perovskite occur naturally, the compounds used in this study do not, Grimaud says. They are synthesized in the laboratory by a simple process: The scientists mix powders of the constituent materials, “grind them up and put it in a furnace at high temperature,” Grimaud says.

The first perovskite was discovered in 1839, Shao-Horn says, but her group “combed back through the studies” and found that surprisingly little is known about how to tune these oxides for water-splitting. Their work “highlights a new path to potentially connect basic oxide physics with the activity and stability of these perovskites,” she says.

“The family is very large,” Grimaud adds, and the work so far “is just scratching the surface.” But with the methods that he, Shao-Horn and their colleagues have developed, “we can screen them and search for active catalysts systematically.”

“We know little about the surfaces of these oxides and how they may change under water-splitting conditions,” Grimaud adds, “and what are the active sites.” Future work will be needed to connect oxide bulk properties with oxide surface chemistry and catalytic activities under operating conditions.

Jean-Marie Tarascon, a professor at the University of Picardie in France and director of its laboratory on reactivity and chemistry of solids, says, “This work is significant as it offers an alternative to costly noble-metal catalysts” for the oxygen evolution reaction [OER]. That’s important, he says, because “there is a huge demand for an OER catalyst for direct solar and electrolytic water-splitting.”

Tarascon, who was not involved in this research, adds, “Personally, I think that the true impact of this work is on the fundamental level. … The fact that these double perovskites are surface-stable is a great advance.”