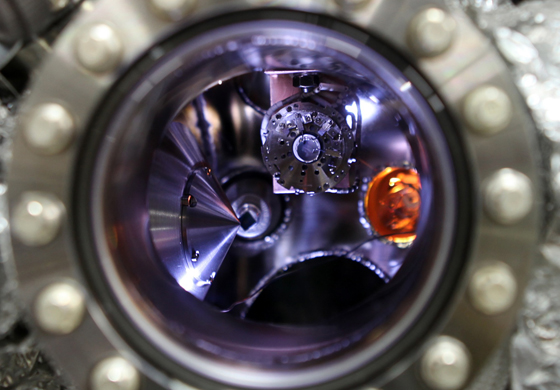 A solid-state lithium-air battery (highlighted in orange) is positioned inside a test chamber at the Advanced Light Source (ALS) at Lawrence Berkeley National Laboratory, in preparation for its testing using X-ray photoelectron microscopy.
Image courtesy of Eva Mutoro and Ethan Crumlin, ALS

Exactly what goes inside advanced lithium-air batteries as they charge and discharge has always been impossible to observe directly. Now, a new technique developed by MIT researchers promises to change that, allowing study of this electrochemical activity as it happens.

The research has just been published in the journal Scientific Reports.

The reactions that take place inside a conventional lithium-air battery are complex, says Yang Shao-Horn, the Gail E. Kendall Associate Professor of Mechanical Engineering and Materials Science and Engineering, who was the senior author of the paper. "We focused on finding out what really happens during charging and discharging," she says. Doing that required the use of a special kind of high-intensity X-ray illumination at one of only two facilities in the world capable of producing such an experiment: the Advanced Light Source (ALS) at the Lawrence Berkeley National Laboratory (LBNL) in California.

That facility made it possible to study the electrochemical reactions taking place at the surface of electrodes, and to show the reactions between lithium and oxygen as the voltage applied to the cell was changed.

The tests used a novel solid-state version of a lithium-air battery made possible via collaboration with Nancy Dudney and colleagues at Oak Ridge National Laboratory (ORNL), Shao-Horn says. When discharging, such batteries draw in some lithium ions to convert oxygen into lithium peroxide. Using ALS, Yi-Chun Lu, a postdoc in Shao-Horn's lab, and Ethan Crumlin, who received his doctorate from MIT this year and is now a postdoc at LBNL, were able to produce detailed spectra of how the reaction unfolds, and show that this reaction is reversible on metal oxide surfaces. Lu and Crumlin were the lead authors of the new research paper.

A lack of understanding of how lithium reacts with oxygen has hindered the development of practical lithium-air batteries, the authors say — but this type of battery offers the prospect of storing up to four times as much energy as today's lithium-ion batteries for a given weight, and so could be a key enabling technology for energy storage, among other uses. Most existing lithium-air batteries suffer from large energy losses during charging and discharging, and have been unable to successfully sustain repeated cycles.

Using the ALS, Crumlin says, "enables the investigation of a wide array of electrochemical studies in real environmental conditions, including the ability to … study the surface chemistry of our specially designed solid-state lithium dioxide cell."

This new method for studying the reactions of such batteries in detail could help researchers in their quest to design better batteries. Such improvements to lithium-air batteries, Shao-Horn says, could potentially enhance round-trip efficiency (energy retention between charge and discharge) and cycle life (the ability to charge and discharge a battery many times).

This study showed that using metal oxides as the oxygen electrode could potentially enable a lithium-air battery to maintain its performance over many cycles of operation. The device used in this study was designed purely for research, not as a practical battery design in itself; if replicated in a real cell, Lu says, such designs could greatly improve the longevity of lithium-air batteries.

The observational method this team developed could have implications for studying reactions far beyond lithium-air batteries, Shao-Horn says. This research, she says, "points to a new paradigm of studying reaction mechanisms for electrochemical energy storage. We can use this technique to study a large number of reactions," she says. "It allows us to look at a large number of different electrochemical energy-related processes."

Bruno Scorsati, a professor of chemistry at the Sapienza University of Rome, says this work is "a novel and sophisticated approach." Scorsati adds that this research marks "a step forward in the progress of the science and technology of these super-high-energy storage systems."

The work, which also involved six other researchers from ORNL, ALS and MIT, was partly funded by the National Science Foundation and the U.S. Department of Energy.