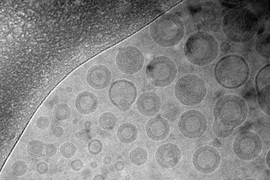 Caption:
Cryoelectron microscope image of the nanoparticles developed by MIT researchers to deliver vaccines to mucosal surfaces.
Credits:
Image: Adrienne Li and Dong Soo Yun
Many viruses and bacteria infect humans through mucosal surfaces, such as those in the lungs, gastrointestinal tract and reproductive tract. To help fight these pathogens, scientists are working on vaccines that can establish a front line of defense at mucosal surfaces.

Vaccines can be delivered to the lungs via an aerosol spray, but the lungs often clear away the vaccine before it can provoke an immune response. To overcome that, MIT engineers have developed a new type of nanoparticle that protects the vaccine long enough to generate a strong immune response — not only in the lungs, but also in mucosal surfaces far from the vaccination site, such as the gastrointestinal and reproductive tracts.

Such vaccines could help protect against influenza and other respiratory viruses, or prevent sexually transmitted diseases such as HIV, herpes simplex virus and human papilloma virus, says Darrell Irvine, an MIT professor of materials science and engineering and biological engineering and the leader of the research team. He is also exploring use of the particles to deliver cancer vaccines.

“This is a good example of a project where the same technology can be applied in cancer and in infectious disease. It’s a platform technology to deliver a vaccine of interest,” says Irvine, who is a member of MIT’s Koch Institute for Integrative Cancer Research and the Ragon Institute of Massachusetts General Hospital, MIT and Harvard University.

Only a handful of mucosal vaccines have been approved for human use; the best-known example is the Sabin polio vaccine, which is given orally and absorbed in the digestive tract. There is also a flu vaccine delivered by nasal spray, and mucosal vaccines against cholera, rotavirus and typhoid fever.

To create better ways of delivering such vaccines, Irvine and his colleagues built upon a nanoparticle they developed two years ago. The protein fragments that make up the vaccine are encased in a sphere made of several layers of lipids that are chemically “stapled” to one another, making the particles more durable inside the body.

“It’s like going from a soap bubble to a rubber tire. You have something that’s chemically much more resistant to disassembly,” Irvine says.

This allows the particles to resist disintegration once they reach the lungs. With this sturdier packaging, the protein vaccine remains in the lungs long enough for immune cells lining the surface of the lungs to grab them and deliver them to T cells. Activating T cells is a critical step for the immune system to form a memory of the vaccine particles so it will be primed to respond again during an infection.

Stopping the spread of infection

In studies of mice, the researchers found that HIV or cancer antigens encapsulated in nanoparticles were taken up by immune cells much more successfully than vaccine delivered to the lungs or under the skin without being trapped in nanoparticles.

HIV does not infect mice, so to test the immune response generated by the vaccines, the researchers infected the mice with a version of the vaccinia virus that was engineered to produce the HIV protein delivered by the vaccine.

Mice vaccinated with nanoparticles were able to quickly contain the virus and prevent it from escaping the lungs. Vaccinia virus usually spreads to the ovaries soon after infection, but the researchers found that the vaccinia virus in the ovaries of mice vaccinated with nanoparticles was undetectable, while substantial viral concentrations were found in mice that received other forms of the vaccine.

“Giving the vaccine at the mucosal surface in the nanocapsule form allowed us to completely block that systemic infection,” Irvine says.

The researchers also found a strong memory T cell presence at distant mucosal surfaces, including in the digestive and reproductive tracts. “An important caveat is that although immunity at distant mucus membranes following vaccination at one mucosal surface has been seen in humans as well, it’s still being worked out whether the patterns seen in mice are fully reproduced in humans,” Irvine says. “It might be that it’s a different mucosal surface that gets stimulated from the lungs or from oral delivery in humans.”

Melissa Herbst-Kralovetz, an assistant professor of basic medical sciences at the University of Arizona College of Medicine, says the nanoparticles are “an exciting and effective strategy for inducing effector-memory T-cell responses to nonreplicating subunit vaccines through mucosal vaccination.”

“More research will need to be conducted to determine the delivery approach to be used in humans, but this vaccination strategy is particularly important for diseases that may require significant T cell-mediated protection, such as HIV,” says Herbst-Kralovetz, who was not part of the research team.

The particles also hold promise for delivering cancer vaccines, which stimulate the body’s own immune system to destroy tumors.

To test this, the researchers first implanted the mice with melanoma tumors that were engineered to express ovalbumin, a protein found in egg whites. Three days later, they vaccinated the mice with ovalbumin. They found that mice given the nanoparticle form of the vaccine completely rejected the tumors, while mice given the uncoated vaccine did not.

Further studies need to be done with more challenging tumor models, Irvine says. In the future, tests with vaccines targeted to proteins expressed by cancer cells would be necessary.

The nanoparticle technology has been patented and licensed to a company called Vedantra, which is now developing infectious-disease and cancer vaccines.