Predicting how proteins will partner 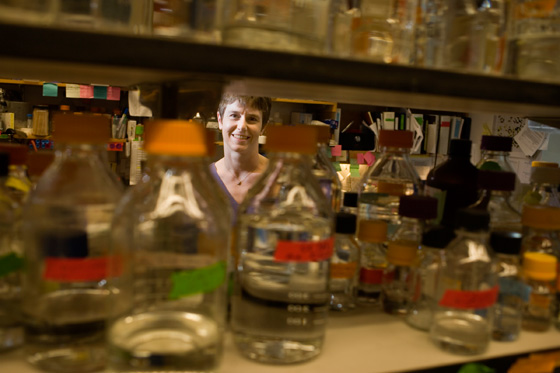 Growing up with a father who taught at Cornell University, and surrounded by friends whose parents were also on Cornell faculty, Amy Keating had little doubt that she would follow the same path.

“It didn’t seem at all unusual that [academia] would be a career path that you might take,” Keating says. “I was pretty much on that track most of my life.”

The only question: What field to pursue? Keating’s academic career has taken a winding path through math, physics and chemistry to her eventual appointment in MIT’s Department of Biology, where she recently earned tenure. Much of her research focuses on computer modeling of the interactions between proteins. Though her work may have potential applications in drug development, she’s driven by sheer interest in understanding the physical phenomena involved.

“I bounced around a lot of scientific areas and they didn’t all grab me like this one does. It’s a geeky thing — I just like to know how these protein interactions work,” she says.

From physics to chemistry

In high school, Keating was drawn to physics and math; she ended up majoring in physics at Harvard University, where she also spent a lot of time rowing. She worked in physics labs during the summers, but most of them didn’t excite her. During this time, she had “a physics student’s disdain for biology,” she recalls. “I was almost aggressively anti-biology.”

After college, she planned to enter a physics PhD program at Cornell, but “sort of panicked at the last minute and decided it wasn’t really what I wanted to do,” she says.

Her then-boyfriend (now her husband) was a chemistry major at Harvard who got her interested in physical organic chemistry — the study of how molecules’ chemical structures influence their reactivity. “It had a lot of the physical principles that I was interested in but also was more intuitive to me than physics,” Keating says. She stayed at Harvard for another year, taking chemistry classes and working in an atomic molecular physics lab.

She then went to graduate school in chemistry at the University of California at Los Angeles, where she did computational studies of the reaction mechanics of organic molecules known as carbenes. After finishing her PhD, she faced a limited job market. “Physical organic chemistry is not a huge field, so I had to look at where it could be applied,” Keating says. “Basically it boils down to, you can do biological applications or you can do materials-science applications.”

She found both interesting, but ended up at MIT’s Whitehead Institute for Biomedical Research as a postdoc in Peter Kim’s lab, collaborating closely with Bruce Tidor, a professor of biological engineering and computer science and electrical engineering. Kim and Tidor worked on protein biochemistry with a particular interest in coil-coil protein interactions — an association that occurs between pairs of proteins shaped like helices. Keating’s job was to tweak the sequences of the proteins involved and develop computer models to predict how those changes would alter the proteins’ interactions.

Nearly all cell functions rely on precise interactions between proteins, determined by the structure of the proteins involved. Small changes in structure or amino-acid sequence can have a big effect on how those proteins connect.

Though her training in physical organic chemistry helped her understand much of the biochemistry involved in those interactions, she had very little background in biology and found herself learning the field by immersion. “I didn’t know any of the amino acids. I knew nothing, in terms of formal training in biochemistry, and certainly not biology,” she says. “I suppose I probably read some books, but I think I mostly just asked the people who were sitting around me to explain things.”

After four years at the Whitehead Institute, Keating started looking for faculty jobs in biology, chemistry and biochemistry. At the last minute, she applied for an opening created in MIT’s Department of Biology after Kim decided to leave, and was hired. “I don’t think I ever would have called myself a biologist before that. I still don’t,” she laughs.

Since starting her own lab, Keating has tried to replicate the diverse range of interests and skills that she found in Kim’s lab. “I really like the team-based aspect of running a research group,” she says. “We’re working on all kinds of projects that I never would have dreamt up in isolation.”

“It’s a sort of mix-and-match game, where we can try to understand, among the different pairs you can form with 53 proteins, which ones are preferred and which ones are not,” Keating says. The lab is also studying how the pairings differ in their ability to bind DNA.

Another target is the Bcl2 family of proteins, which also come in pairs — one coiled protein bound to a more globular protein. These proteins are important for regulating programmed cell suicide. Cancer cells often have too much Bcl2, which appears to help them stay alive, so drug companies are now working on drugs that inhibit the protein.

Though her work may eventually help with that kind of drug development, Keating’s team is focused on fundamental questions of how proteins work, and how those workings can be modeled.

“We’re not motivated by any one application, but just by the fact that scientists’ current ability to predict or design protein-protein interactions is poor,” Keating says. “The future of biologic drugs, synthetic biology, and diagnostic and detection technologies requires that we do better.”