MIT faculty speak at the World Economic Forum in Davos 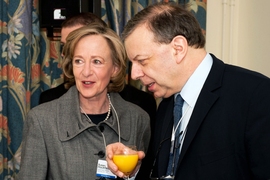 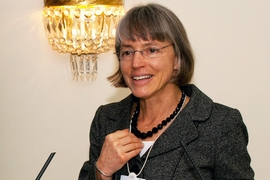 ↓ Download Image
Caption: Nancy Kanwisher, a professor in the Department of Brain and Cognitive Sciences and a principal investigator at the McGovern Institute for Brain Research, delivers a talk at the MIT-hosted breakfast discussion about neuroscience.
Credits: Photo: Harriet Carlson 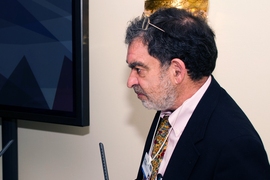 ↓ Download Image
Caption: Tomaso Poggio, a professor in the Department of Brain and Cognitive Sciences and a principal investigator at the McGovern Institute for Brain Research, speaks at the breakfast.
Credits: Photo: Harriet Carlson 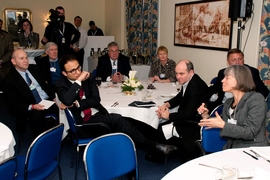 Caption:
MIT hosted a breakfast discussion about neuroscience during the Annual meeting of the World Economic Forum in Davos. Here, MIT President Susan Hockfield speaks with Philip Campbell, Editor in Chief of <i>Nature</i>, at the breakfast.
Credits:
Photo: Harriet Carlson

Caption:
Nancy Kanwisher, a professor in the Department of Brain and Cognitive Sciences and a principal investigator at the McGovern Institute for Brain Research, delivers a talk at the MIT-hosted breakfast discussion about neuroscience.
Credits:
Photo: Harriet Carlson

Caption:
Tomaso Poggio, a professor in the Department of Brain and Cognitive Sciences and a principal investigator at the McGovern Institute for Brain Research, speaks at the breakfast.
Credits:
Photo: Harriet Carlson

Caption:
Hockfield and President of Israel Shimon Peres, who attended the MIT neuroscience breakfast.
MIT President Susan Hockfield and about a dozen members of the MIT faculty traveled to Davos, Switzerland, last week to participate in the annual meeting of the World Economic Forum (WEF).

The five-day meeting, which brings together leaders in business, politics, academia and other areas, hosted a variety of discussions revolving around this year’s theme: “The Great Transformation: Shaping New Models.”

A troubled global economy with high unemployment dominated many of the meeting’s conversations. In a panel on the future of economics, economists including Peter Diamond, Institute Professor Emeritus and a winner of last year’s Nobel Prize in Economics, and MIT graduates Bob Shiller and Joe Stiglitz agreed that many economic models failed to recognize the nature of the current economic crisis because they largely ignored the effects of contagion and connectedness — unable to factor in the financial connections between institutions and the global risk of bankruptcy cascades. Panelists said more attention to models recognizing the role of collateral and new models, such as those incorporating behavioral economics, may offer a more accurate outlook.

MIT researchers also said that basic research in neuroscience will play a significant role in shaping societies, behavior and economic progress. MIT President Susan Hockfield spoke at Davos of the importance of basic brain research in fields other than neuroscience.

“New findings from neuroscience will have profound implications in fields far beyond the brain and mind, and well beyond psychology or medicine,” Hockfield said.

An analysis of how human nature could improve society was the topic of discussion among faculty members H. Robert Horvitz, the David H. Koch Professor of Biology and a Nobel laureate; Nancy Kanwisher, the Walter A. Rosenblith Professor of Cognitive Neuroscience; Alex “Sandy” Pentland, the Toshiba Professor of Media Arts and Sciences; and Tomaso Poggio, the Eugene McDermott Professor in the Brain Sciences and Human Behavior. One example is what the group termed “trust networks”: communities, such as open-source software users, that combine technical know-how with a certain amount of trust. Code creators, sharers and users need to trust each other in order to build on and propagate a software program. The researchers argued that understanding how trust plays into such large-scale networks may foster more successful innovations for society.

The researchers also discussed new advances in brain imaging, exploring the ever-closing gap between artificial and human intelligence. In the near future, they said, neuroscientists may be able to construct a precise model of the human brain, which could serve as a testing ground for potential therapies as well as a blueprint for artificially intelligent machines.

Yossi Sheffi, the Elisha Gray II Professor of Engineering Systems, moderated a panel on vulnerabilities in the global supply chain. Piracy, the effects of climate change, and weaknesses in cybersecurity are significant risks to the global trade of goods and services; panelists suggested that governments work together to reduce the impact of such risks.

Ed Boyden participated in a panel on leadership, in which panelists looked at the complex pressures that leaders face, including rapidly changing environments, technology, and social crises. Carlo Ratti presented a project for a new, interactive urban design in Mexico, called Ciudad Creativa Digital, with Mexican president Felipe Calderon. Adèle Naudé Santos and Neil Gershenfeld contributed to a broad discussion on innovations in social and technological models. Gershenfeld noted that smart materials and the digital revolution have made it possible for ordinary people to create new technologies, while Santos argued that the physical environment — particularly modern cities — is essential to making connections between people.

Susan Hockfield and MIT hosted three private events: a breakfast discussion about neuroscience moderated by Nature Editor in Chief Philip Campbell and featuring Bob Horvitz, Nancy Kanwisher and Tomaso Poggio; a dinner discussion about the fate of the Eurozone featuring Peter Diamond and Nouriel Roubini, a Professor of Economics and International Business at New York University’s Stern School made famous for having predicted the housing crisis; and a reception for friends of MIT.

Hockfield, who serves as a Director of the WEF, said, “The large number of MIT faculty in attendance covered a lot of academic ground, but one message they all sent to Forum attendees was this: solving the toughest problems in the world requires science, mathematics and engineering. It’s an important message in any era and particularly important in times of fiscal austerity.”