A brain beyond borders 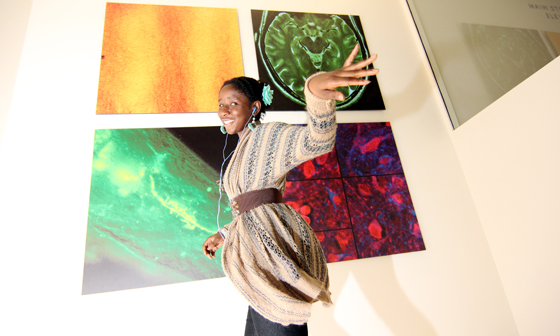 In addition to her research on decision-making and her courses in brain and cognitive science, Victoria Okuneye enjoys dancing salsa.
Photo: Allegra Boverman

Decisions aren’t always easy to make — especially life-changing ones. When MIT senior Victoria Okuneye found out four years ago that she had been admitted to the Institute, she took a while to choose her path. “I didn’t decide until the last day,” Okuneye reflects, “but I think I had really decided a long time before.”

Four years later, Okuneye can tell you all about making decisions. She has nearly completed her major in brain and cognitive sciences (as well as minors in chemistry and applied international studies) and conducts research on decision making in the Center for Neuroeconomics at MIT — when she’s not dancing salsa, writing and performing spoken word poetry, and empowering youth in Jamaica or Mexico, that is.

But Okuneye, who was awarded a Truman Scholarship earlier this year, hadn’t considered MIT until the summer before her senior year of high school, when she participated in MITES (Minority Introduction to Engineering and Science), an MIT outreach program that hosts promising high school juniors on campus. Okuneye saw a place that would help her excel in the math and science subjects she loved.

“I come from the Midwest, and many people don’t think out of state,” she says. But Okuneye always thought beyond borders, inspired in part by her family. Her parents came to the United States from Nigeria before she was born, while six older siblings stayed behind. “I have a lot more opportunity than the rest of my family, mostly since I was born here,” Okuneye says. “I felt like I should take advantage of all the opportunities I could.”

One such opportunity is the chance to do hands-on research as an undergraduate at MIT. Currently, Okuneye researches the neural mechanisms behind denial and decision making in health matters.

“For example, if a guy sees he has a strange bump or lesion on his arm, what sort of mechanisms are going on in his brain that will lead him to seek or not to seek help from a doctor?” Okuneye says. A better understanding of what goes on in people’s brains when they are making health decisions could help improve intervention efforts, she explains.

Okuneye’s passion for neuroscience began before MIT, she says, as did her interest in youth development. But her time at the Institute has brought both to maturity.

In high school, before she even “had a conception of international development,” Okuneye started a youth activist group along with some of her friends. “I did a lot of fundraisers, that sort of thing,” she says. But Okuneye wanted to become more aware and deliberate in her work with youth, she says. “I wanted to learn the way of doing it properly,” she explains.

MIT gave her that opportunity. “At MIT, I’ve gotten a lot of hands-on experience traveling abroad,” Okuneye says. And she’s learned that helping the world is hard. “I think before, I thought there would be an easy formula, that you just have to think hard about it and crunch some numbers,” she says. “I understand now why it’s so difficult.”

Last summer, Okuneye traveled to Mexico City through the MIT International Science and Technology Initiatives (MISTI), a program of the School of Humanities, Arts, and Social Sciences that connects students with international internships. There, she worked on “neurocoaching,” a field that looks to improve performance and culture in workplaces through a better understanding of the cognitive neuroscience behind them. Next, she was off to Jamaica, where she has spent several weeks during August of each of the last two years.

But that wasn’t the end of her international travel: In January of this year, Okuneye returned to Mexico — this time, Guadalajara — to help lead an “engineering innovations camp” for high school and college students. The program aimed to encourage entrepreneurship and, Okuneye says, introduced the students to “MIT culture and values.”

Okuneye returned from her second trip to Jamaica on Sept. 1, after spending three weeks there continuing a teacher-training project she worked on the previous summer with MIT’s International Development Club and a nongovernmental organization called Great Shape! Inc. She taught basic computer skills to local teachers who would then use computers in their elementary school curricula. “It was really cool,” Okuneye says. “They get really into it, and we get exposed to a whole different culture. It’s a learning experience for both of us.”

Okuneye’s two passions — neuroscience and international youth empowerment — might seem to have little overlap, but she was determined to find a way to pursue both. In choosing a career path, she says, she asked herself, “how can I combine these into one path so that I’m not divided for the rest of my life?”

Okuneye has decided to focus her career on global mental health care, particularly for disadvantaged youth. She plans to pursue an MD/PhD and envisions herself as a professor one day. “I value the freedom they have; they can wear a lot of hats, fill a lot of shoes,” she explains. “I envision myself sticking with academia, because I really value the academic environment, especially places like MIT.”