What makes an image memorable? 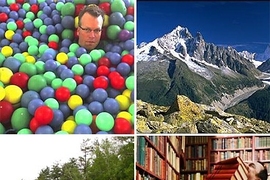 ↓ Download Image
Caption: Can you guess which of these images would be the most memorable? Give up? It's the top left and bottom right ones.
Credits: Images courtesy of the Oliva and Torralba labs 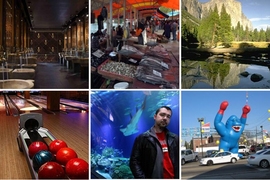 Caption:
Can you guess which of these images would be the most memorable? Give up? It's the top left and bottom right ones.
Credits:
Images courtesy of the Oliva and Torralba labs
Next time you go on vacation, you may want to think twice before shooting hundreds of photos of that scenic mountain or lake.

A new study from MIT neuroscientists shows that the most memorable photos are those that contain people, followed by static indoor scenes and human-scale objects. Landscapes? They may be beautiful, but they are, in most cases, utterly forgettable.

“Pleasantness and memorability are not the same,” says MIT graduate student Phillip Isola, one of the lead authors of the paper, which will be presented at the IEEE Conference on Computer Vision and Pattern Recognition, taking place June 20-25 in Colorado Springs.

The new paper is the first to model what makes an image memorable — a trait long thought to be impenetrable to scientific study, because visual memory can be so subjective. “People did not think it was possible to find anything consistent,” says Aude Oliva, associate professor of cognitive science and a senior author of the paper.

However, the MIT team, which also included Antonio Torralba, the Esther and Harold E. Edgerton Associate Professor of Electrical Engineering and Computer Science, and one of his graduate students, Jianxiong Xiao, was surprised to see remarkable consistency among hundreds of people who participated in the memory experiments.

Using their findings from humans, the researchers developed a computer algorithm that can rank images based on memorability. Such an algorithm could be useful to graphic designers, photo editors, or anyone trying to decide which of their vacation photos to post on Facebook, Oliva says.

Oliva’s previous research has shown that the human brain can remember thousands of images, with a surprising level of detail. However, not all images are equally memorable.

For the new study, the researchers built a collection of about 10,000 images of all kinds — interior-design photos, nature scenes, streetscapes and others. Human subjects in the study (who participated through Amazon’s Mechanical Turk program, which farms tasks out to people sitting at their own computers) were shown a series of images, some of which were repeated. Their task was to indicate, by pressing a key on their keyboard, when an image appeared that they had already seen.

Each image’s memorability rating was determined by how many participants correctly remembered seeing it.

In general, different research subjects tended to produce similar memorability ratings. “There are always differences between observers, but on average, there is very high consistency,” says Oliva, who is also a principal investigator in the computer vision group at MIT’s Computer Science and Artificial Intelligence Laboratory.

After gathering their data, the researchers made “memorability maps” of each image by asking people to label all the objects in the images. A computer model can then analyze those maps to determine which objects make an image memorable. 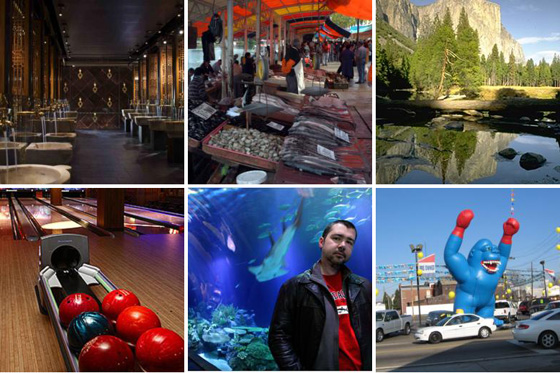 A series of memorable and forgettable photos from the study. The forgettable images are in the top row. The memorable ones are in the bottom row.
Images courtesy of the Oliva and Torralba labs
In general, images with people in them are the most memorable, followed by images of human-scale space — such as the produce aisle of a grocery store — and close-ups of objects. Least memorable are natural landscapes, although those can be memorable if they feature an unexpected element, such as shrubbery trimmed into an unusual shape.

“There has been a lot of work in trying to understand what makes an image interesting, or appealing, or what makes people like a particular image. But all of those questions are really hard to answer,” says Efros, who was not involved in this research. “What [the MIT researchers] did was basically approach the problem from a very scientific point of view and say that one thing we can measure is memorability.”

The researchers then used machine-learning techniques (a type of statistical analysis that allows computers to identify patterns in data) to create a computational model that analyzed the images and their memorability as rated by humans. For each image, the computational model analyzed various statistics — such as color, or the distribution of edges — and correlated them with the image’s memorability.

That allowed the researchers to generate an algorithm that can predict memorability of images the computational model hasn’t “seen” before. Such an algorithm could be used by book publishers to evaluate cover art, or news editors looking for the most memorable photograph to feature on their website.

Oliva believes the algorithm might also be of interest to camera manufacturers, and Isola is thinking about designing an iPhone app that could immediately tell users how memorable the photo they just took will be. For that application, the main challenge is getting the algorithm to work fast enough, Isola says.

Other possible applications are clinical memory tests that more precisely reveal what aspects of visual memory are deficient in specific psychological or brain disorders, and games to help train the memory.

The researchers are now doing a follow-up study to test longer-term memorability of images. They are also working on adding more detailed descriptions of image content, such as “two people shaking hands,” or “people looking at each other,” to each image’s memorability map, in an effort to find out more about what makes the image memorable.