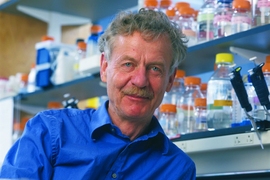 Jaenisch was cited in the award for “improving our understanding of epigenetic regulation of gene expression: the biological mechanisms that affect how genetic information is variably expressed. His work has led to major advances in our understanding of mammalian cloning and embryonic stem cells.”

The National Medal of Science was established by Congress in 1959 as a presidential award honoring those who have made “outstanding contributions to knowledge in the physical, biological, mathematical, or engineering sciences.” Jaenisch is the third recipient in three years from MIT: Susan Lindquist, a Whitehead member and biology professor, received it last year; MIT biochemist JoAnne Stubbe won it in 2009. Jaenisch will be the third winner from Whitehead, as Robert Weinberg garnered the honor in 1997.

In making today’s announcement, which also included the recipients of the National Medal of Technology and Innovation, Obama noted: “Each of these extraordinary scientists, engineers and inventors is guided by a passion for innovation, a fearlessness even as they explore the very frontiers of human knowledge, and a desire to make the world a better place. Their ingenuity inspires us all to reach higher and try harder, no matter how difficult the challenges we face.”

Jaenisch learned through an email from the White House last week that he would be named a winner, saying that he was both “shocked and very honored” at the news.

“I’m very grateful, of course,” Jaenisch says. “But I’m really only partly deserving of this. Any success I’ve had scientifically is due in large part to all the imaginative, hardworking people in my lab. I can’t help but feel this type of credit should be distributed more broadly. I feel it’s a team honor.”

Jaenisch earned a medical degree from the University of Munich in 1967, though he recognized immediately that he belonged not in the clinic but in the laboratory. He became a postdoc at the Max Planck Institute in Munich, studying bacteriophages. That early research ignited for Jaenisch what would become a lifelong passion for understanding gene transcription, expression, regulation and transmission. He left Germany in 1970 for research stints at Princeton University, Fox Chase Institute for Cancer Research and the Salk Institute. He returned to Germany in 1977 to head the department of tumor virology at the Heinrich Pette Institute at the University of Hamburg. He arrived as a member of the Whitehead Institute in 1984.

Jaenisch’s research achievements include generation of the world’s first transgenic mice and the first experiment showing that therapeutic cloning in mice could correct a genetic defect. He also conducted the first proof-of-principle experiments demonstrating the therapeutic potential of iPS cells by using such cells to correct sickle-cell anemia in mice and Parkinson’s disease in rats. Among his research priorities today is the use of patient-derived iPS cells to advance the study of such human diseases as Parkinson’s and Alzheimer’s.

An MIT alumnus, Rakesh Agrawal ScD '80, was named a National Medal of Technology and Innovation winner on Monday as well. Agrawal is currently the Winthrop E. Stone Distinguished Professor of Chemical Engineering at Purdue University.

Jaenisch and Agrawal are scheduled to receive their medals at a White House ceremony later this year.