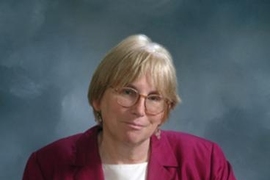 Obama will present the award to Stubbe and eight other scientists during an Oct. 7 White House ceremony.

"Professor JoAnne Stubbe is a scientist's scientist: fiercely intelligent, doggedly curious and unbending in her pursuit of truth," said MIT President Susan Hockfield. "We are extraordinarily proud that she has received the National Medal of Science for her pioneering work in advancing our understanding of the chemistry at the root of life."

Stubbe, who learned about the award in a late Tuesday night phone call from John Holdren '65, SM '66, Obama's science and technology adviser, said she is excited to make the trip to the White House and meet the president.

"It's a little overwhelming, and a great honor," said Stubbe, the Novartis Professor of Chemistry and a professor of biology. "For the first time, everybody in my family is excited about what I do," she joked.

According to the award citation, Stubbe was honored "for her groundbreaking experiments establishing the mechanisms of ribonucleotide reductases, polyester synthases, and natural product DNA cleavers — compelling demonstrations of the power of chemical investigations to solve problems in biology."

"These scientists, engineers and inventors are national icons, embodying the very best of American ingenuity and inspiring a new generation of thinkers and innovators," Obama said in the announcement. "Their extraordinary achievements strengthen our nation every day-not just intellectually and technologically but also economically, by helping create new industries and opportunities that others before them could never have imagined."

Stubbe's work over the past four decades has had profound impacts on fields ranging from cancer drug development to synthesis of biodegradable plastics.

One of her major accomplishments is unraveling the mechanism of ribonucleotide reductases (RNRs), which play a key role in converting nucleotides to deoxynucleotides — thereby allowing DNA to be copied and repaired. Her studies in this area have led to the design of a drug, gemcitabine, which is now used to treat pancreatic and other cancers.

MIT chemistry professor Stephen Lippard, who won the National Medal of Science in 2004, describes Stubbe as "one of the top few mechanistic biochemists of her generation." Stubbe spent a sabbatical in Lippard's lab in 1983 before joining the MIT faculty, and he has long admired her dedication, critical thinking, and relentless pursuit of the truth. "There are few people with her drive for understanding and insistence on accuracy in experimental work," he says. "It is a pleasure to be her colleague."

Stubbe also discovered the structure and function of bleomycin, an antibiotic used as a cancer drug. Her research team, in collaboration with the laboratory of John Kozarich at ActivX, revealed how bleomycin damages DNA, killing the cancer cell. They also identified the structure of the DNA damage.

Stubbe is now working with MIT Biology Professor Anthony Sinskey to use bacterial enzymes to produce biodegradable thermoplastics, which could be a potential alternative to traditional oil-based plastics. They were the first to isolate one of the enzymes, known as PHA synthases, and to define how the plastic polymers form.

The National Medal of Science was created in 1959 and is administered for the White House by the National Science Foundation. Awarded annually, the medal recognizes individuals who have made outstanding contributions to science and engineering. Nominees are selected by a committee of presidential appointees based on their advanced knowledge in, and contributions to, the biological, behavioral/social, and physical sciences, as well as chemistry, engineering, computing, and mathematics.

Stubbe is a member of the National Academy of Sciences, the American Academy of Arts and Sciences and the American Philosophical Society. She has won the National Academy of Sciences Award in Chemical Sciences (2008), the Kaiser Award (2008), the Nakanishi Award (2009), the Alfred Bader Award in Bioorganic and Bioinorganic Chemistry (1997), the Repligan Award (2004), the Pfizer Award in Enzyme Chemistry (1986), the ICI-Stuart Pharmaceutical Award for Excellence in Chemistry (1989), the Cope Scholar Award (1993), the Richards Medal from the Northeastern Section of the American Chemical Society (1996) and the Prelog Medal (2009), among others.

Stubbe joined the MIT faculty in 1987 from the University of Wisconsin at Madison, where she had been a faculty member since 1983. She has also taught at the Yale University School of Medicine (1977-80) and at Williams College (1972-77) and was an NIH postdoctoral fellow at Brandeis (1975-77) and a postdoctoral researcher at the University of California (1971-72).

In addition to Stubbe, this year's winners of the National Medal of Science include MIT alumnus Rudolf Kalman of the Swiss Federal Institute of Technology in Zurich. Kalman  earned his bachelor's and master's degrees in electrical engineering and computer science from MIT in 1953 and 1954, respectively.