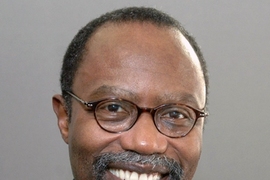 ↓ Download Image
Caption: Phillip Clay PhD '75, MIT’s chancellor since 2001, has decided to step down from his position. He will remain chancellor until a replacement is found.
Credits: Photo: Donna Coveney

Caption:
Phillip Clay PhD '75, MIT’s chancellor since 2001, has decided to step down from his position. He will remain chancellor until a replacement is found.
Credits:
Photo: Donna Coveney
Phillip L. Clay, who as MIT’s chancellor has greatly enhanced the Institute’s support of student life and learning over the past decade, announced today that he has decided to step down. Clay, who has been discussing such a move with the Institute’s leadership for the last six months, will continue in his current position until a successor takes office.

As MIT’s chancellor since 2001, Clay PhD ’75 has served as one of the Institute’s two most senior academic officers. A driving force behind the Campaign for Students, Clay has helped raise more than $500 million to support future generations of MIT students. He will continue his leadership of the Campaign through its completion next spring.

Clay, a professor of urban studies and planning, has held academic leadership positions at MIT for nearly two decades. He served as associate provost from 1994 to 2001 and was head of the Department of Urban Studies and Planning from 1992 to 1994.

“Chancellor Clay has been an exceptional leader, overseeing the offices of Undergraduate Education, Graduate Education and Student Life, and playing a critical role in MIT’s engagements regionally and internationally,” President Susan Hockfield said in an e-mail to the MIT community in which she expressed gratitude for Clay’s service. “His insight and judgment on a wide range of issues, as well as his wisdom and experience, have benefited all of us at MIT.”

Hockfield added that she hoped to identify a successor before the end of the spring semester, and she encouraged community members to send suggestions of possible candidates as well as ideas about the position to her via e-mail at chancellorsearch@mit.edu, or at the Office of the President, Room 3-208. All correspondence received will be treated as confidential.

“President Hockfield and I have been discussing this transition for the last six months, and we agreed that the time was now right to make a change,” said Clay, who will go on sabbatical for a year after he steps down.

“I have enjoyed my almost 10 years in this role. Together with great administration colleagues, staff, faculty and students, we have improved the quality of student life and student learning,” Clay added. “We have enhanced our legacy and made it fresh.”

A remarkable record of achievement

Under Clay’s leadership, MIT saw the number of applications for undergraduate admission double and also attracted students of increasing quality, diversity and breadth of achievement. Financial aid evolved to reinforce MIT’s values and enrollment goals, and to support diversity. The Institute advanced the educational commons through increased opportunities for global education, communications, project- and service-based activities, and through support for innovative courses across the curriculum.

Also during Clay’s tenure as chancellor, MIT greatly expanded graduate housing and supported improvements to graduate student life. The Institute added the Sydney-Pacific and Ashdown residence halls to create a graduate community in the Northwest sector. Simmons Hall came online for undergraduates, and several residence halls were upgraded. MIT enhanced support for fraternities, sororities and independent living groups by increasing staff support and services, leadership training and alumni engagement. Together with the Medical Department, the chancellor’s office developed a program of mental-health and student services. Support for student programs and leadership initiatives increased.

Together with other senior officers, Clay helped lead MIT’s management of the recent global financial crisis through a budget-reduction process designed to balance the general Institute budget while preserving MIT’s core strengths during a time of significant pressure on MIT’s endowment. MIT has emerged from the crisis on solid financial footing. Clay also played an important part in the development of some of MIT’s international initiatives and global education programs, including the Cambridge-MIT Exchange and the MIT-Portugal Program.

Clay, a member of the MIT faculty since 1975, served as assistant director of the MIT-Harvard Joint Center for Urban Studies from 1980 to 1984. He is widely known for his work in U.S. housing policy and community-based development and has been involved in several studies that received national attention. In one 1987 study commissioned by the Neighborhood Reinvestment Corp., he identified the market and institutional conditions contributing to the erosion of low-income rental housing and documented the need for a national preservation policy. He later served on the national commission that recommended the policy that became part of the Housing Act of 1990.

Clay’s research and writing continue to explore U.S. housing and urban policy. In his most recent research, sponsored by several national foundations, Clay evaluated the effectiveness of various initiatives to build organizational and developmental capacity in community-based development organizations.

Clay is a founding member of the National Housing Trust, which addresses the issue of housing preservation. He is also president of the board of The Community Builders, Inc., the nation’s largest nonprofit developer of affordable housing. In recent years, he has served as a senior adviser on projects in several areas that include public housing, community capacity building and urban job initiatives. He served as chairman of the board of Roxbury Community College from 2002 to 2006, and has served as a consultant to federal and state agencies and foundations. He serves as member and vice chair of the MasterCard Foundation board and recently was appointed to the board of trustees of the University of North Carolina at Chapel Hill.

Among other works, his publications include two books, Neighborhood Renewal: Middleclass Resettlement and Incumbent Upgrading in American Neighborhoods, and Neighborhood Politics and Planning (with Rob Hollister).

Born and raised in Wilmington, N.C., Clay is a 1964 graduate of Williston High School and received the AB degree with Honors from the University of North Carolina at Chapel Hill in 1968. He and his wife, Cassandra, live in Boston.