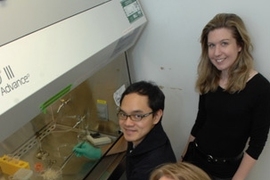 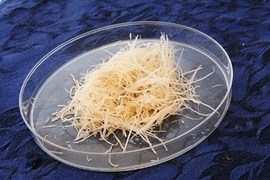 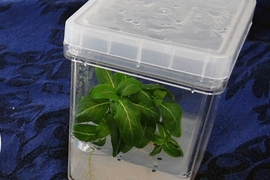 In work that could expand the frontiers of genetic engineering, MIT chemists have, for the first time, genetically altered a plant to produce entirely new compounds, some of which could be used as drugs against cancer and other diseases.

The researchers, led by Sarah O'Connor of the Department of Chemistry, produced the new compounds by manipulating the complex biosynthetic pathways of the periwinkle plant. This sort of manipulation, which O'Connor and her graduate student, Weerawat Runguphan, report in the Jan. 18 issue of Nature Chemical Biology, offers a new way to tweak potential drugs to make them less toxic (and/or more effective).

Genetic engineering is not new: Scientists have known for years how to get plants to resist pests and herbicides or to produce substances such as insecticides by inserting genes from other plants or animals. What is new, however, is the ability to induce plants to create new products by tinkering with the plants' own synthetic pathways.

O'Connor's laboratory has studied periwinkle for several years because it produces a variety of alkaloid compounds of pharmacological interest, including vinblastine, a drug commonly used to treat cancers such as Hodgkin's lymphoma.

Periwinkle also produces serpentines, which have shown promise as anti-cancer agents, and ajmalicine, which is used to treat hypertension. Other plant-produced compounds have shown pharmacological activity but are too toxic for use in humans.

"That inspired us to think about metabolic engineering in a much more sophisticated way," said O'Connor, the Latham Family Career Development Associate Professor of Chemistry. "We can virtually re-engineer the pathway."

O'Connor and Runguphan focused on an enzyme involved in an early step of the alkaloid synthesis pathway. The enzyme normally accepts a terpenoid called secologanin and tryptamine, an alkaloid, as substrates.

Another graduate student, Peter Bernhardt, engineered a mutant form of the enzyme that can accept tryptamine with a halogen (such as chlorine or bromine) attached. Runguphan grew genetically engineered plant cell cultures that produce the mutant enzyme and got them to synthesize several compounds that periwinkle plants would normally never produce.

The halogens could serve as points of attachment to add other novel chemical groups to the compounds, modifying their effectiveness and/or toxicity as drugs, said O'Connor.

So far all of the genetic engineering has been done in plant cell cultures, but Runguphan has started growing a tiny whole periwinkle plant with the mutant enzyme.

In the future, the researchers plan to use the same approach to produce additional compounds, in hopes of creating new and more effective drug candidates.

The research was funded by the National Science Foundation, the National Institutes of Health and the American Cancer Society.

A version of this article appeared in MIT Tech Talk on February 4, 2009 (download PDF).