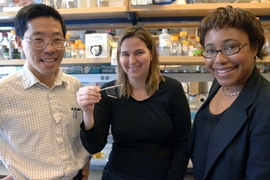 ↓ Download Image
Caption: From left, MIT professors Yet-Ming Chiang, Angela Belcher and Paula Hammond. The three have authored a paper detailing their virus-based method of creating and installing microbatteries by stamping them onto a variety of surfaces.
Credits: Photo / Donna Coveney 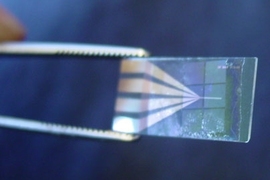 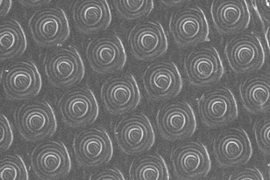 ↓ Download Image
Caption: An array of microbattery electrodes, each only about four micrometers, or millionths of a meter, in diameter.
Credits: Image courtesy / Belcher Laboratory, MIT

Caption:
From left, MIT professors Yet-Ming Chiang, Angela Belcher and Paula Hammond. The three have authored a paper detailing their virus-based method of creating and installing microbatteries by stamping them onto a variety of surfaces.
Credits:
Photo / Donna Coveney

Caption:
An array of microbattery electrodes, each only about four micrometers, or millionths of a meter, in diameter.
Credits:
Image courtesy / Belcher Laboratory, MIT

Forget 9-volts, AAs, AAAs or D batteries: The energy for tomorrow's miniature electronic devices could come from tiny microbatteries about half the size of a human cell and built with viruses.

MIT engineers have developed a way to at once create and install such microbatteries -- which could one day power a range of miniature devices,Â from labs-on-a-chip to implantable medical sensors -- by stamping them onto a variety of surfaces.

In the Proceedings of the National Academy of Sciences (PNAS) the week of Aug. 18, the team describes assembling and successfully testing two of the three key components of a battery. A complete battery is on its way.

"To our knowledge, this is the first instance in which microcontact printing has been used to fabricate and position microbattery electrodes and the first use of virus-based assembly in such a process," wrote MIT professors Paula T. Hammond, Angela M. Belcher, Yet-Ming Chiang and colleagues.

Further, the technique itself "does not involve any expensive equipment, and is done at room temperature," said Belcher, the Germeshausen Professor of Materials Science and Engineering and Biological Engineering.

Hammond is the Bayer Professor of Chemical Engineering and associate head of the Department of Chemical Engineering. Chiang is a professor of ceramics in the Department of Materials Science and Engineering. Belcher, Chiang and Hammond are also affiliated with the MIT Energy Initiative, which aims to help transform the global energy system to meet the needs of the future. Belcher and Hammond are also faculty members in the Koch Institute for Integrative Cancer Research at MIT.

Batteries consist of two opposite electrodes -- an anode and cathode -- separated by an electrolyte. In the current work, the MIT team created both the anode and the electrolyte.

First, on a clear, rubbery material the team used a common technique called soft lithography to create a pattern of tiny posts either four or eight millionths of a meter in diameter. On top of these posts, they then deposited several layers of two polymers that together act as the solid electrolyte and battery separator.

Next came viruses that preferentially self-assemble atop the polymer layers on the posts, ultimately forming the anode. In 2006, Hammond, Belcher, Chiang and colleagues reported in Science how to do this. Specifically, they altered the virus's genes so it makes protein coats that collect molecules of cobalt oxide to form ultrathin wires -- together, the anode.

The final result: a stamp of tiny posts, each covered with layers of electrolyte and the cobalt oxide anode. "Then we turn the stamp over and transfer the electrolyte and anode to a platinum structure" that, together with lithium foil, is used for testing, Hammond said.

What's next? In addition to developing the third part of a full battery -- the cathode --Â via the viral assembly technique, the team is also exploring a stamp for use on curved surfaces, Belcher said. "We're also interested in integrating [the batteries] with biological organisms."