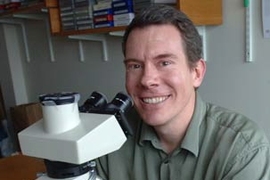 ↓ Download Image
Caption: Arlin Rogers, principal research scientist in the MIT Division of Comparative Medicine, looks at slides in his office. He and colleagues have figured out why men are more susceptible to liver cancer than women.
Credits: Photo / Donna Coveney

Caption:
Arlin Rogers, principal research scientist in the MIT Division of Comparative Medicine, looks at slides in his office. He and colleagues have figured out why men are more susceptible to liver cancer than women.
Credits:
Photo / Donna Coveney

A fundamental difference in the way men and women respond to chronic liver disease at the genetic level helps explain why men are more prone to liver cancer, according to MIT researchers.

"This is the first genome-wide study that helps explain why there is such a gender effect in a cancer of a nonreproductive organ, where you wouldn't expect to see one," said Arlin Rogers, an MIT experimental pathologist and lead author of a paper that appeared last month in the journal Cancer Research.

Men develop liver cancer at twice the rate of women in the United States. In other countries, especially in Asia, the rate for men can be eight or 10 times that for women.

Liver cancer is the fifth most common cancer in the world and the third-biggest killer. Rates in the United States are lower than those in other countries but are rising rapidly, in part due to high hepatitis C infection rates during the 1970s from blood transfusions and IV drug abuse. Obesity and type 2 diabetes are additional risk factors of current concern.

"It's an epidemic waiting to happen," said Rogers, a principal research scientist in MIT's Division of Comparative Medicine.

The MIT team studied mice, which also have higher liver cancer rates among males. The mice were infected with Helicobacter hepaticus, which produces the same hepatitis symptoms characteristic of human hepatitis B and C.

In humans and mice, healthy males and females both can respond to acute toxins and other stresses. But the male liver is less well equipped to cope with the chronic inflammation induced by certain infectious agents.

When the male mice developed chronic hepatitis, some masculine liver genes were upregulated and others turned off. At the same time, some feminine genes were reactivated. This resulted in an unpredictable gene profile termed "liver-gender disruption."

"There's no rhyme or reason to it. There's just a complete scrambling of masculine and feminine genes," said Rogers.

When the researchers mapped the sex-specific genes, they found intimate associations with inflammatory pathways. In males with chronic hepatitis, some gender-specific genes were overexpressed and others underexpressed, the liver was unable to maintain normal metabolic function and cancer emerged in a significant number of the animals.

The authors propose that adult females are less vulnerable to liver-gender disruption because there is no requirement for the active signaling needed to maintain a masculine gene profile. Because the female liver follows the "default" developmental pathway, a greater disturbance is required to initiate the cancer process, said Rogers.

The researchers had expected that castrating male mice at one year of age when they had chronic hepatitis, but not cancer, would have a protective effect. They also gave some mice a powerful androgen to see if that would promote tumors. Neither treatment had any effect, demonstrating that male sex hormones such as testosterone do not directly promote liver cancer in adults.

These results could be relevant to cancers of other organs, such as the stomach and colon, which also are associated with chronic inflammation and are more common in men.

"This study was a collaboration between the Division of Comparative Medicine and Center for Environmental Health Sciences. It would not have been possible without the expertise and team-oriented philosophy of the wonderful scientists we have here," said Rogers.