Bringing a bit of MIT to Africa 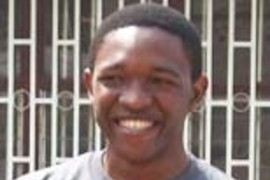 The west African country of Cameroon is one of the few to have been colonized by both England and France, and as a result English and French are both official languages of the independent nation today. But the French-speaking eastern and central regions dominate, accounting for about 80 percent of the nation's population of 18 million people.

MIT sophomore Edison Achelengwa, a student in electrical engineering and computer science, comes from the English-speaking minority in Cameroon, and spent his first year of college in the French-speaking University of Yaounde, in the nation's capital. Like many Cameroonians, he speaks both French and English, as well as a couple of the local languages.

This year, with a grant from the Public Service Center, he returned to his home country during IAP to work on installing MIT's OpenCourseWare on computers in that school as well as the University of Buea, the country's only English-speaking university. Though Open CourseWare is available through the Internet, most African universities, including these two, do not have Internet connections, so students would have to go out to an Internet cafÃ© to access the material. By installing it on a local server, however, all 1,800 courses of the material became available to every computer on campus through a local-area network.

Getting the installation done proved to be more complicated than expected, and Achelengwa says he learned a great deal that he thinks will help him to make more progress on his next visit.

"It was a difficult experience," he says. Despite the fact that he had made arrangements in advance with faculty members at the two universities, he soon discovered that wasn't enough. Though the faculty had assured him that they would have a workstation prepared for him to install the courseware, "most of the administrators didn't know about it," he says, and getting approval from them to go ahead turned out to be difficult. "Knocking on doors, trying to explain what I was trying to do wasn't easy," he says.

In the end, after showing various faculty members and administrators a 10-minute video he had prepared to demonstrate how the system worked, he finally received the needed go-ahead to install the hard drive he had brought with him containing the OpenCourseWare material. Now, "it will become readily accessible" to the students there, he says, and the system is currently being evaluated by the school.

He had hoped to bring some computers to the school as well, but found out that the shipping costs outweighed the benefits of the donated hardware.

"The experience showed me a whole new, different face of my country," Achelengwa says. "A lot of Cameroonians are thirsty for knowledge, and they hold MIT in high esteem."

But the bureaucratic obstacles that delayed his work also taught him valuable lessons. "You can really be a blessing to people," he says, "but if you want to get something done, you really have to hit the right spot. Sometimes you have to go to the top."

Achelengwa hopes to return to Cameroon this summer to make MIT's OpenCourseWare available to other institutions around the country, and to evaluate its use in the two universities where he already installed it.

Achelengwa advises people who attempt such projects in developing countries to be persistent and not let difficulties deter them. "You can't always expect people to welcome you with open arms, even if you're doing something for them," he says. "Doing the right thing is never a bed of roses."