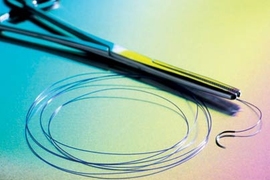 With the help of a new type of suture based on MIT research, patients who get stitches may never need to have them removed.

A biopolymer suture cleared last month by the FDA is made of materials that the human body produces naturally, so they can be safely absorbed once the wound is healed. They are also 30 percent stronger than sutures now used and very flexible, making them easier for surgeons to work with.

The sutures were developed by Tepha, Inc., a Cambridge company that hopes to use the same material to produce an array of absorbable medical devices, including stents, surgical meshes and possibly a heart valve scaffold, says Simon Williams, CEO of Tepha and a former MIT postdoctoral associate.

Williams said he envisions that the new sutures will be used for abdominal closures, which are prone to re-opening, and to stitch tendons and ligaments.

Developed using a method created at MIT, the absorbable sutures are the first made from material produced by genetically modified bacteria.

About 20 years ago, researchers in the laboratory of MIT biology professor Anthony Sinskey started swapping genes between different bacteria, hoping to achieve industrial production of desirable natural compounds synthesized by those bacteria.

The researchers focused their "biopolymer engineering" efforts on a group of genes that code for enzymes in a pathway that produces polyesters. Those polyesters can be broken down into metabolites naturally produced by humans, so they cause no harm when absorbed.

Once the genes were identified, they could be transferred into a strain of industrial E. coli that can produce large quantities of the strong, flexible polymer.

The FDA cleared the biopolymer sutures on Feb. 8, and Williams said Tepha plans to start marketing them soon, in partnership with another company.

"Not only is it technically and in an engineering sense a tremendous victory, but it's also a victory for society because this leads to new medical devices that can help people in new and novel ways," said Sinskey, who is one of the founders of Tepha and sits on its board of directors.

The new suture is the first of what the researchers hope will be many medical devices made from the natural polyesters.

"What we've found is that this one material seems to be finding a lot of use in different applications," because of its wide range of desirable properties, Williams said.

Tepha is now working on developing other medical devices, such as surgical meshes, multifilament fibers and stents. Ultimately, the researchers hope to develop an artificial scaffold that could be used to grow heart valves after being implanted in a patient, which would spare children with heart valve defects from undergoing repeated surgeries.
Tests of the device in animals have shown promise.

Tepha, founded six years ago, is a spinoff of Metabolix, a company the researchers founded in 1992 to market bioplastics and biopolymer packaging materials.

Original work at MIT on this technique was funded by the National Institutes of Health.