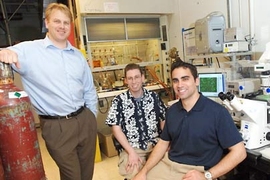 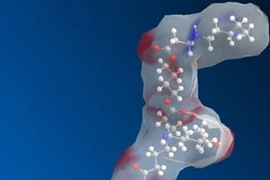 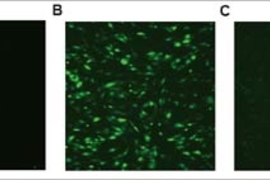 In work that could lead to safe and effective techniques for gene therapy, MIT researchers have found a way to fine-tune the ability of biodegradable polymers to deliver genes.

Gene therapy, which involves inserting new genes into patients' cells to fight diseases like cancer, holds great promise but has yet to realize its full potential, in part because of safety concerns over using viruses to carry the genes.

"What we wanted to do is start with something that's very safe--a biocompatible, degradable polymer--and try to make it more effective, instead of starting with a virus and trying to make it safer," said Jordan Green, a graduate student in biological engineering and co-first author of the paper.

Gregory Zugates, a former graduate student in chemical engineering now at WMR Biomedical, Inc., is also a co-first author of the paper.

Gene therapy has been a field of intense research for nearly 20 years. More than 1,000 gene-therapy clinical trials have been conducted, but to date there are no FDA-approved gene therapies. Most trials use viruses as carriers, or vectors, to deliver genes.

However, there are risks associated with using viruses. As a result, many researchers have been working on developing non-viral methods to deliver therapeutic genes.

The MIT scientists focused on three poly(beta-amino esters), or chains of alternating amine and diacrylate groups, which had shown potential as gene carriers. They hoped to make the polymers even more efficient by modifying the very ends of the chains.

When mixed together, these polymers can spontaneously assemble with DNA to form nanoparticles. The polymer-DNA nanoparticle can act in some ways like an artificial virus and deliver functional DNA when injected into or near the targeted tissue.

The researchers developed methods to rapidly optimize and test new polymers for their ability to form DNA nanoparticles and deliver DNA. They then chemically modified the very ends of the degradable polymer chains, using a library of different small molecules.

"Just by changing a couple of atoms at the end of a long polymer, one can dramatically change its performance," said Anderson. "These minor alterations in polymer composition significantly increase the polymers' ability to deliver DNA, and these new materials are now the best non-viral DNA delivery systems we've tested."

The polymers have already been shown to be safe in mice, and the researchers hope to ultimately run clinical trials with their modified polymers, said Anderson.

Non-viral vectors could prove not only safer than viruses but also more effective in some cases. The polymers can carry a larger DNA payload than viruses, and they may avoid the immune system, which could allow multiple therapeutic applications if needed, said Green.

One promising line of research involves ovarian cancer, where the MIT researchers, in conjunction with Janet Sawicki at the Lankenau Institute for Medical Research, have demonstrated that these polymer-DNA nanoparticles can deliver DNA at high levels to ovarian tumors without harming healthy tissue.

The research was funded by the National Institutes of Health, the Department of Defense and the National Science Foundation.

The MIT Center for Cancer Research (CCR) was founded in 1974 and is one of eight National Cancer Institute-designated basic research centers. Its mission is to apply the tools of basic science and technology to determine how cancer is caused, progresses and responds to treatment.

A version of this article appeared in MIT Tech Talk on September 12, 2007 (download PDF).