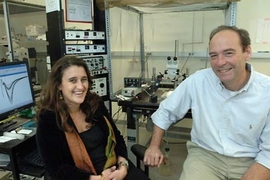 Researchers at MIT's Picower Institute for Learning and Memory have corrected key symptoms of mental retardation and autism in mice.

The work, which will be reported in the Dec. 20 issue of Neuron, indicates that a certain class of drugs could have the same effect in humans. These drugs are not yet approved by the FDA, but will soon be entering into clinical trials.

Fragile X syndrome (FXS), affecting 100,000 Americans, is the most common inherited cause of mental retardation and autism. The MIT researchers corrected FXS in mice modeling the disease. "These findings have major therapeutic implications for fragile X syndrome and autism," said study lead author Mark F. Bear, director of the Picower Institute and Picower Professor of Neuroscience at MIT.

The findings support the theory that many of FXS's psychiatric and neurological symptoms--learning disabilities, autistic behavior, childhood epilepsy--stem from too much activation of one of the brain's chief network managers, the metabotropic glutamate receptor mGluR5.

Individuals with FXS have mutations in the X chromosome's FMR1 gene, which encodes the fragile X mental retardation protein, FMRP. The MIT study found that FMRP and mGluR5 are at opposite ends of a kind of molecular seesaw. They keep each other in check and, without FMRP, mGluR5 signals run rampant.

Bear and colleagues study how genes and environment interact to refine connections in the brain. Synapses are the brain's connectors and their modifications are the basis for all learning and memory. There's a growing consensus among researchers that developmental brain disorders such as FXS, autism and schizophrenia should be considered "synapsopathies"--diseases of synaptic development and plasticity (the ability to change in response to experience).

Dendritic spines--little nubs on neurons' branchlike projections--receive many of the synaptic inputs from other neurons. Abnormal spines have long been associated with various forms of human mental retardation. In FXS, spines are more numerous, longer and more spindly than they should be. Thin spines tend to form weak connections.

The researchers used genetic engineering to reduce mGluR5, but a drug could accomplish the same thing. Although not yet approved by the FDA, mGluR5 blockers are entering into human clinical trials. "Insights gained by this study suggest novel therapeutic approaches, not only for fragile X but also for autism and mental retardation of unknown origin," Bear said.