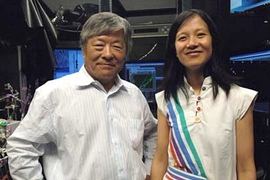 Researchers at the Picower Institute for Learning and Memory at MIT have, for the first time, reversed symptoms of mental retardation and autism in mice.

The work will be reported in the online early edition of the Proceedings of the National Academy of Sciences the week of June 25-29.

The mice were genetically manipulated to model Fragile X Syndrome (FXS), the leading inherited cause of mental retardation and the most common genetic cause of autism. The condition, tied to a mutated X chromosome gene called fragile X mental retardation 1 (FMR1) gene, causes mild learning disabilities to severe autism.

According to the Centers for Disease Control, FXS affects one in 4,000 males and one in 6,000 females of all races and ethnic groups. The prevalence of autism ranges from one in 500 to one in 166 children. There is no effective treatment for FXS and other types of autism.

"Our study suggests that inhibiting a certain enzyme in the brain could be an effective therapy for countering the debilitating symptoms of FXS in children, and possibly in autistic kids as well," said co-author Mansuo L. Hayashi, a former Picower Institute postdoctoral fellow currently at Merck Research Laboratories in Boston.

The study identifies a key enzyme-a chemical reaction-inducing protein-as a possible target for an FXS drug. The enzyme, called p21-activated kinase, or PAK, affects the number, size and shape of connections between neurons in the brain.

There are known chemical compounds that inhibit the enzymatic activity of PAK. These compounds or versions of them may be useful in the future development of drugs for treating FXS, he said.

"These are intriguing findings because the expression of the gene that inhibits PAK occurs in the third week after birth, which means that the neuronal abnormalities in the fragile X mouse are reversed after they appear," said Eric Klann, a professor at New York University's Center for Neural Science. "This is very exciting because it suggests that PAK inhibitors could be used for therapeutic purposes to reverse already established mental impairments in fragile X children."

Tonegawa, Hayashi, MIT graduate student Bridget M. Dolan of the Department of Biology and colleagues study the molecules that govern the formation of neuronal connections in the brain. They explore how abnormalities in these molecules could interfere with an animal's behavior.

In the brain, small protrusions called dendritic spines on the branch-like dendrites of one neuron receive chemical signals from other neurons and communicate them to the main cell body. The numbers and shapes of dendritic spines are key to normal brain function.

FXS patients have higher numbers of dendritic spines in their brains, but each spine is longer and thinner, and transmits weaker electric signals, than those in non-affected individuals. When the enzymatic activity of PAK was inhibited in the FXS mice, abnormalities in their spine number and structure-as well as the weaker electrical communication between their neurons-were reversed.

The FXS mice exhibited symptoms similar to those in FXS patients. These included hyperactivity; purposeless, repetitive movements reminiscent of autistic people; attention deficits and difficulty with learning and memory tasks.

"These behavioral abnormalities are ameliorated, partially or fully, by inhibiting the enzymatic activity of PAK," Tonegawa said. "Notably, due to an elegant genetic manipulation method employed by the Picower Institute researchers, PAK inhibition in the FXS mice did not take place until a few weeks after appearance of disease symptoms. This implies that future treatment may still be effective even after symptoms are already pronounced."

"While future studies will be necessary to further characterize the precise molecular nature of the interaction between PAK and FMR1, our findings clearly demonstrate that PAK inhibition can counteract several key cellular and behavioral symptoms of FXS," the authors noted.

In addition to Tonegawa, a Howard Hughes Medical Institute investigator, Hayashi and Dolan, authors include colleagues at the National Institute of Mental Health and Neurosciences; the Tata Institute of Fundamental Research in India; and Seoul National University in Korea.