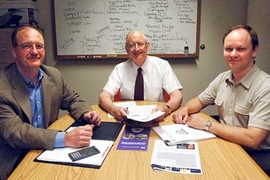 While Congress considers seven bills that aim to limit America's greenhouse gas (GHG) emissions, MIT researchers have offered an analysis of the legislation based on a powerful model they created.

The MIT Joint Program on the Science and Policy of Global Change applied its model to the seven bills to determine how costs associated with each might affect the domestic economy. While the program does not endorse any individual bill, the analysis could lend insight into potential climate consequences and the rough effects on prices and consumers, said Henry Jacoby, co-director of the joint program and a professor of management. "The objective of the assessment is to help policy-makers move toward a consensus," he said.

The current proposals span a wide range of future emissions targets for the country. The Bingaman-Specter and Udall-Petri bills, for instance, would keep U.S. emissions near current levels, while others sponsored by McCain-Lieberman, Kerry-Snowe, Waxman and Sanders-Boxer call for emissions reductions of 50 to 80 percent below the 1990 level by 2050.

"All of these bills would substantially reduce United States GHG emissions from what they would be if nothing were done and would, if other countries follow suit, substantially reduce the risk of very serious climate change," said John M. Reilly, associate director for research for the joint program.

The MIT model predicts that if no action is taken, U.S. greenhouse gas emissions will double by 2050, with global levels growing even faster and continuing to rise for the rest of the century. Global temperatures would rise by 3.5 degrees to 4.5 degrees above current levels by 2100. "The more ambitious of the Congressional proposals could limit this increase to around 2 degrees Centigrade, but only if other nations, including developing nations, also strongly control greenhouse gas emissions," Jacoby said.

The MIT Joint Program on the Science and Policy of Global Change conducts interdisciplinary research and independent policy analysis of global environmental issues.

One of its tools, the MIT Integrated Global System Model (IGSM), simulates global environmental changes linked to human activities, the uncertainties associated with these projected changes and the effect of proposed policies on such changes. IGSM and its main economic component, the MIT Emissions Prediction and Policy Analysis model, were applied to the seven proposals.

The various proposals include a variety of measures that would limit greenhouse gases. Many feature a mandatory cap-and-trade system that would cover all or most sectors of the economy.

In such a system, the government sets a mandatory cap on total emissions from polluters such as power plants and industrial and commercial firms. The emissions are then divided up into individual credits--usually for one ton of pollution--that represent the right to emit that amount.

The total amount of credits cannot exceed the cap, limiting total emissions to that level. Companies that pollute beyond their allowances must buy credits from those who pollute less than their allowances or face heavy penalties. The government might distribute credits to companies for free or auction them, but in either case companies are allowed to buy or sell credits among themselves.

The cost of meeting the proposed targets for the most stringent of the proposals would be equivalent to losing somewhat less than a year of economic growth through mid-century, Jacoby said. The proposals would increase the price of carbon dioxide to $30 to $50 per ton in 2015, rising to $120 to $210 by 2050.

"These CO2 prices would be reflected as higher prices for fossil fuels, providing an incentive for alternative fuels and improved efficiency," Reilly said. "The value of the emissions permits--the resulting government revenue if the credits were auctioned rather than distributed for free--would range between $100 billion and $500 billion a year."

Given the need to cap carbon dioxide emissions, the scale of required changes in the energy system could be dramatic. Even with strong growth in renewable electricity, by 2050, projections reveal a need for as many as 500 new nuclear power plants or new coal-fired generators that capture and store the carbon dioxide to meet growing electricity demand and to replace existing fossil fuel consumption.

"Squeezing the emissions out of our cars over the next few decades is projected to come through a huge expansion in biofuels production with likely effects on the cost of food," Reilly said.

"These results represent one plausible scenario of the potential outcomes, valuable not for the precise numerical estimates but for insights about the general direction of changes in the economy, the potential climate consequences of different emission paths and the rough magnitude of the effects to be expected on prices and the well-being of consumers," Jacoby said.

The joint program study can be found at web.mit.edu/globalchange/www/MITJPSPGC_Rpt146.pdf.