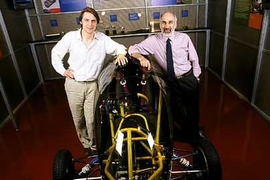 Imagine a vehicle that runs on hydrogen or biofuels and offers the same features, performance and price as today's gasoline vehicle. Will it capture half the market? Not likely, concludes a new MIT analysis. Not even if it's three times more fuel-efficient.

Among the barriers: Until many alternative fuel (AF) vehicles are on the road, people won't consider buying one--so there won't be many on the road. Catch-22.

The researchers' conclusions are not all gloomy, though. If policy incentives are kept in place long enough, adoption will reach a level at which the market will begin to grow on its own. But "long enough" may be a surprisingly long time.

Given today's environmental pressures and energy security concerns, we need to move away from fossil-fuel-powered vehicles. But repeated attempts to introduce other technologies during the past century have nearly all failed. Dethroning the gasoline-consuming internal combustion engine (ICE) has proved difficult.

"The challenge is not just introducing an AF vehicle," said postdoctoral associate Jeroen Struben of the Sloan School of Management, who has been examining the mechanisms behind such market transitions. "Consumer acceptance, the fueling infrastructure and manufacturing capability all have to evolve at the same time."

Thus, consumer exposure to AF vehicles is just one feedback loop that can slow adoption. Similarly, fuel suppliers won't build AF stations until they're certain of future demand; but until the fuel is widely available, consumers won't buy the vehicles. And manufacturers won't be able to make AF vehicles cheaper and better until their production volume is high; but high-volume production won't happen until such improvements are in place to attract buyers.

And then of course there's the status quo to be overcome--the well-established and highly attractive gasoline-ICE vehicle and the fueling infrastructure, energy supply chain and other industries that support it.

To analyze the behavior of this system over time, Struben and Professor John D. Sterman of the Sloan School have developed a system dynamics model that simulates how markets for AF vehicles may (or may not) grow. The model can track the fate of various vehicle platforms, including conventional and advanced ICE, hybrids and plug-in hybrids, hydrogen fuel cells and biofuels. Decisions made by consumers, fuel suppliers and auto manufacturers change the market, consumer opinion, vehicle attributes and other factors, which then feed back to alter the decisions people make tomorrow.

Finally, the model accounts for the peculiarities of human behavior. "Our model doesn't assume that everybody is a perfectly rational economic agent," said Sterman. "Instead, we try to model how people actually make decisions such as which cars to buy and when and where to drive them. Emotion and social status matter, along with the economics." Thus, people's buying decisions may not reflect the actual features of an AF vehicle but rather what they have heard or read about it. And real drivers who are worried about locating fuel for their AF vehicles may fill their tanks early--a behavior that reduces the vehicles' effective range and may cause unanticipated side effects such as crowding at filling stations.

Analyses to date show that a key factor slowing AF-vehicle adoption is the long lifetime of today's vehicles. People buy cars infrequently, so it will be a long time before a given consumer is exposed to enough AF vehicles to feel comfortable buying one. Even an AF vehicle that's as attractive (objectively) as a gasoline-ICE vehicle won't catch on without strong and lasting promotion campaigns.

Concern about finding fuel also slows adoption. In a simulation representing California, entrepreneurs opened AF stations in urban areas but not in less-populated rural areas where demand is initially lower. Urban AF drivers must then avoid the rural areas, reducing the appeal of AF vehicles and slowing their sales everywhere.

Another counterintuitive result: Tripling the fuel efficiency of the AF vehicle should attract more buyers. But since drivers then need much less fuel, energy suppliers build fewer AF stations, lowering the appeal of these efficient cars. The net result? Sales may actually decline.

Despite such findings, Sterman sees reason for optimism: There are tipping points. With policy incentives that push the new technology forward and sufficient coordination across decision-makers, eventually enough AF vehicles will be on the road that all the decision-makers will buy in and the AF market can become self-sustaining.

The researchers are not ready to make policy recommendations, but their analyses provide initial insights. They clearly illustrate the effectiveness of carbon emission taxes, but they also produce some more-unexpected findings. For example, given the importance of vehicle lifetime, providing incentives to scrap current vehicles may be more effective than direct efforts to get more AF vehicles on the road. Likewise, providing subsidies for building AF stations will help, but giving bonuses for building and especially keeping them in remote areas may be critical.

Most important, for markets to reach the tipping point, policy incentives may have to be kept in place for many decades, even through periods of declining fuel prices. Withdrawing the policies too soon will result in yet another failed attempt to shift the market away from gasoline-powered ICE vehicles.

This research was supported by the Project on Innovation in Markets and Organizations at the MIT Sloan School of Management, the National Renewable Energy Laboratory and Shell Hydrogen.