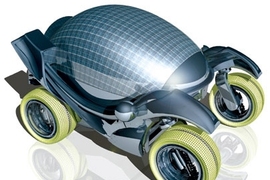 ↓ Download Image
Caption: This sketch of a concept solar car was created for the MIT Vehicle Design Summit, a gathering of students who will work on alternative transportation ideas this summer.
Credits: Image / Mitchell Joachim and William Lark

Caption:
This sketch of a concept solar car was created for the MIT Vehicle Design Summit, a gathering of students who will work on alternative transportation ideas this summer.
Credits:
Image / Mitchell Joachim and William Lark

Seventy-three students from 21 universities around the world will gather at MIT this summer to design and build between five and 10 commuter vehicles that exploit human power, biofuels, solar technologies and fuel cells to travel at least 500 miles per gallon of fuel.

By the end of the MIT Vehicle Design Summit, the cars created by the students, who have previously designed solar racecars for the World Solar Challenge (WSC) and super-mileage vehicles for the European Shell Eco-Marathon, will tour the country to bring attention to the social and technological issues surrounding alternative-powered vehicles.

An added goal for the June 13-Aug. 13 program is to lay a foundation for ongoing multidisciplinary transportation research involving all five MIT schools. "We hope to create a project-based, socially conscious engineering curriculum for the '06-'07 academic year," said Anna S. Jaffe, a junior in civil and environmental engineering and one of the summit student organizers.

The summit also could set the stage for an international consortium focused on green transportation for India, China and other countries with rapidly expanding transportation infrastructures.

The students will work with industry and academia speakers and mentors to create the vehicles. Through a partnership with the MIT Media Lab's Fab Lab, additional cars will be designed to be built at Fab Labs in Norway, Costa Rica, India, Ghana and South Africa.

The Fab Lab program, part of MIT's Center for Bits and Atoms, explores how information relates to physical representation. The Fab Lab's partner organizations around the world are geared toward allowing ordinary people to design machines to improve the quality of their lives.

For decades, universities and corporations have fielded teams to compete in the WSC, a solar-powered car race spanning 3,021 kilometers through central Australia from Darwin to Adelaide.

The competition's organizers hoped it would spawn solar vehicles that might one day be mass produced, but the cars, optimized to race across the outback, have been too specialized for commuter use. Encouraged by WSC organizers to design a new rule set, the MIT Solar Electric Vehicle Team decided to bring together participants for the intensive nine-week design summit aimed at in-depth exploration of alternative transportation technologies.

"We hope to have an impact on not only the field of solar racing but the energy debate as well," said co-organizer Robyn Allen, a senior in the Department of Aeronautics and Astronautics. "Exploring both the socio political and technical aspects of this work, we are excited to provide a space for students to lend a new voice to the global energy discussion.

The participants will publish a technical manual at the conclusion of the summit and distribute their findings in the public domain.

A version of this article appeared in MIT Tech Talk on June 14, 2006 (download PDF).