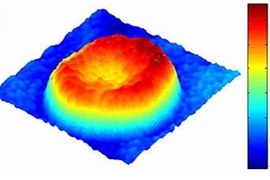 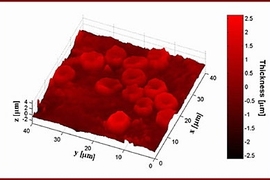 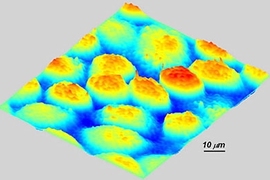 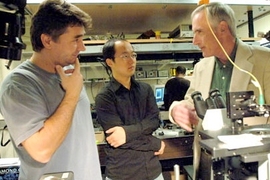 For the first time, researchers at MIT can see every vibration of a cell membrane, using a technique that could one day allow scientists to create three-dimensional images of the inner workings of living cells.

But cell membrane dynamics are just the beginning.

Soon, the researchers hope to extend their view beyond the cell membrane into the cell, to create images of what is happening inside living cells -- including how cells communicate with each other and what causes them to become cancerous.

"One of our goals is create 3D tomographic images of the internal structure of a cell," said Michael Feld, MIT professor of physics and director of the Spectroscopy Lab. "The beauty is that with this technique, you can study dynamical processes in living cells in real time."

Scientists have long been able to peer into cells using electron microscopy, which offers a much higher magnification than a traditional light microscope. However, electron microscopy can only be used on cells that are dehydrated, frozen or treated in other ways. Thus it cannot be used to view living cells.

Quantitative phase imaging, on the other hand, allows researchers to observe living cells for as long a time period as they want. After years of fine tuning, the MIT researchers can now create images with a resolution of 0.2 nanometers. (A red blood cell has a diameter of about 8 microns, or 8,000 nanometers.)

So far, the team has focused its attention primarily on red blood cells and neurons. Red blood cells are an especially good model to study cell membrane dynamics because they are relatively simple cells, with no nuclei or internal cell structures, says Gabriel Popescu, a postdoctoral associate in the Spectroscopy Lab.

In work that is soon to be published in Physical Review Letters, the MIT researchers show that the frequency of cell membrane vibration is related to the elasticity of the cell membrane. Elasticity is important for red blood cells because they have to be able to squeeze through tiny capillaries in the brain and elsewhere, as they deliver oxygen.

"The elasticity of these cells is crucial for their function," said Popescu.

It has been known for more than a century that red blood cell membranes are continuously undulating, or as Popescu puts it, a red blood cell is "effectively a drum in perpetual vibration." This undulation offers a chance to study the mechanical properties of the membrane, including how the membrane provides the cell with both the softness and the elasticity needed to squeeze through narrow capillaries.

Popescu gave a talk on the blood cell work earlier this month at a meeting of the Optical Society of America.

Another group in the Spectroscopy Lab is studying signal propagation in neurons. This project, a collaboration with Sebastian Seung, a professor of brain and cognitive sciences, and led by Chris Fang-Yen, a postdoctoral associate in the Spectroscopy Laboratory, is based on the fact that membranes undergo tiny mechanical deformations when an action potential (electrical current) travels along the neuron's axon.

The correlation between membrane vibration and electrical activity could "give us insight on how networks are organized on a neuron level," said Fang-Yen. They are especially interested in studying neural networks in the hippocampus, a brain area associated with memory.

The trouble with interferometry

Quantitative phase imaging builds on an optical phenomenon known as interferometry. With this method, a light wave passing through the cell is compared with a reference wave that doesn't pass through the sample. Combining those two waves creates an interference pattern that offers nanometer-scale images of individual cells.

The major problem with interferometry is that the apparatus is highly sensitive. Even breathing near the interferometer can disrupt the system, leading Popescu to observe that in a typical laboratory environment, trying to measure such tiny optical signals is "like trying to sense the waves of a jellyfish in a stormy ocean."

One way to overcome that is to mount the system in an isolated environment. Another technique, known as the "common path" approach, places both arms of the interferometer (through which the light waves are traveling) in close proximity so the noise in the signals cancel each other out.

Quantitative phase imaging has not yet reached the level of resolution that electron microscopy offers, but Feld said he believes it will someday.

This work was funded by the National Institutes of Health and Hamamatsu Photonics.