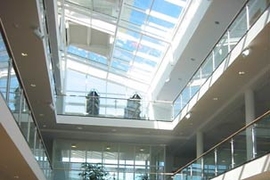 Caption:
Researchers from MIT and Cambridge University are collaborating on in-depth studies of this building in Luton, England, which is cooled by natural ventilation. Their work includes on-site measurements, computer simulations and experiments with scale models.
Credits:
Photo / Christine E. Walker, MIT

Operating commercial buildings consumes a sixth of all the energy used in the Western world. Getting rid of air conditioning could cut that consumption by as much as a third -- but people don't like to work in sweltering heat.

Buildings can be designed to encourage airflow and maintain temperatures that minimize or eliminate the need for conventional air-conditioning systems. "That approach improves air quality, ensures good ventilation and saves both energy and money," said Professor Leon R. Glicksman, director of MIT's Building Technology Program. Indeed, studies have shown that people generally feel more comfortable in a naturally ventilated building than in an air-conditioned one.

Yet few commercial buildings now use natural ventilation. "The approach is new, and architects worry it won't work in the buildings they're designing," said Glicksman, who has appointments in the Department of Architecture and the Department of Mechanical Engineering. He and his collaborators at MIT and Cambridge University in England are developing new computer tools and scale-model experiments that should help to alleviate those worries.

Their studies focus on an office building in Luton, England, that was designed to use natural ventilation. The building features multiple floors opening onto a large central atrium, operable windows on each floor and five large vents at the top of the atrium with fans for added ventilation.

For six months, the research teams monitored temperatures and other conditions throughout the building. For the most part, the building behaved as expected: Fresh air came in through the windows, entered the atrium, rose and exited through the ceiling vents. But on some floors, measurements near the atrium showed air moving toward the windows -- the wrong way to bring in fresh air.

So the researchers brought other tools to bear. They did carefully controlled experiments using a one-twelfth-size replica of the Luton building, equipped with heating elements to represent people, computers and so on. And they created computer simulations that -- based on incoming winds, indoor heat sources and other factors -- can calculate airflow between rooms, the atrium and outside as well as conditions within single rooms.

Their findings explained the unexpected measurements in the full-scale building. Because of temperature differences and buoyancy effects, cooler air can at times slip over the low safety barriers surrounding the atrium and enter an office. There the air moves along the floor toward the window, then quickly rises and heads back out toward the atrium along the ceiling -- a local reverse eddy.

"We found what we initially thought were some strange results when we did the full-scale-building tests," said Glicksman. "But using the computer model, we now understand the physics of it, first of all confirming that it's a real effect and second, why it occurred." Such effects can be corrected by building in automatic control systems that, for example, turn on the vent fans when needed to ensure the continuous flow of fresh air.

Based on these findings, the MIT team is formulating a simple, user-friendly computer tool that will help architects design for natural ventilation. They plan to incorporate the tool into their "Design Advisor," a web site (designadvisor.mit.edu) that lets architects and planners see how building orientation, window technology, and other design choices will affect energy use and occupant comfort.

Natural ventilation does, of course, have its limits. For example, during hot summers in Hong Kong or even Boston, conventional air conditioning would still be needed. But just using natural ventilation during spring and fall in Boston, for example, could save at least half the energy now used for year-round air conditioning, the researchers estimate.

Glicksman hopes that the new tool and better understanding will help overcome the biggest challenge to natural ventilation -- convincing architects and building operators that it will work and showing them how well it will work for proposed new designs.

This research was supported by the Cambridge-MIT Institute with funding from BP and the Permasteelisa Group.

A version of this article first appeared as a research spotlight on the Energy Research Council website.