New model of cancer syndrome could lead to treatments 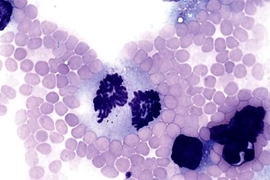 ↓ Download Image
Caption: A colon cancer cell circulating in the blood stream of an LFS mouse is in the process of dividing and contains substantially more than the normal number chromosomes, a feature that is characteristic of tumor cells. <a onclick="MM_openBrWindow('mousemodel-smear-enlarged.html','','width=509, height=583')">
<span onmouseover="this.className='cursorChange';">
<strong>Open image gallery</strong>
</span>
</a>
<noscript> <a href="mousemodel-smear-enlarged.html">
<em>(no JavaScript)</em>
</a>
</noscript>
Credits: Image courtesy / MIT Center for Cancer Research 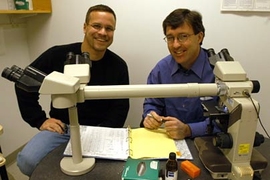 Caption:
A colon cancer cell circulating in the blood stream of an LFS mouse is in the process of dividing and contains substantially more than the normal number chromosomes, a feature that is characteristic of tumor cells. <a onclick="MM_openBrWindow('mousemodel-smear-enlarged.html','','width=509, height=583')">
<span onmouseover="this.className='cursorChange';">
<strong>Open image gallery</strong>
</span>
</a>
<noscript> <a href="mousemodel-smear-enlarged.html">
<em>(no JavaScript)</em>
</a>
</noscript>
Credits:
Image courtesy / MIT Center for Cancer Research

Scientists from MIT's Center for Cancer Research have developed a new mouse model that closely resembles Li-Fraumeni Syndrome (LFS) in humans, a syndrome that predisposes those affected to a broad range of cancers. Some 95 percent of LFS patients develop cancer by age 65.

This work, which was reported in the Dec. 17 issue of Cell, could lead to a treatment for LFS and aid in the development of treatments for other cancers.

The research shows that a single point mutation in the tumor suppressor gene p53 yields a mouse that develops a broad tumor spectrum reminiscent of LFS. Although LFS is a rare genetic disease, affecting fewer than 400 families worldwide, the p53 gene is very commonly mutated in tumors unrelated to LFS. Mutations in p53 are detected in more than 50 percent of all human tumors, such as colon, breast, skin, bladder and many cancers of the digestive tract. Consequently, the development of a therapy for LFS specifically targeted at p53 has the potential to be applied to a wide range of cancers.

"The LFS mouse strains, which have been many years in the making, will be extremely valuable in understanding how the common mutations in p53 contribute to tumor formation," said Tyler Jacks, David H. Koch professor of biology, director of the Center for Cancer Research and leader of the MIT team. "We expect these strains will also help us determine how to specifically treat p53 mutant tumors," explained Jacks, who is also an Investigator for the Howard Hughes Medical Institute.

Understanding the genetic basis of disease is the key to developing effective therapies in the fight against cancer, and mouse models of human cancer have played an integral role in research. However, previous attempts to create accurate mouse models of LFS by completely inactivating p53 were unsuccessful because the mice did not develop the wide range of tumors seen in human LFS patients.

In this study, two different mutations in p53 that are commonly found in human tumors were tested in the mouse. These mutations do not lead to deletion of p53, but have more subtle effects. The authors found that mice that possessed either of the two mutations in p53 developed more tumors and more different types of tumors than do mice completely lacking p53.

"By knocking out p53, the mice did not develop as many types of tumors as is typically seen with LFS," said Kenneth Olive, lead author of the paper and a graduate student in biology. "Therefore, it is important that we understand what it is about these subtle mutations that is different from simply inactivating the whole gene. More generally, if we are to truly understand human cancer, it is important that we study not just any mutation, but the right mutation."

Other MIT authors of the paper are David Tuveson, now an assistant professor at the University of Pennsylvania, biology undergraduates Zachary Ruhe and Bob Yin, and former research technician Nicholas Willis and research affiliate Denise Crowley of the Center for Cancer Research. Roderick Bronson of Tufts University School of Veterinary Medicine also contributed to this work.

The work is supported by the Howard Hughes Medical Institute and the National Cancer Institute Mouse Models of Human Cancer Consortium. Support also comes from a Koch Graduate Fellowship and a National Institutes of Health Training Grant.