“Visualizing the Proton” through animation and film

Caption:
An innovative animation conveys the current understanding of the structure of the proton.
Credits:
Image: James LaPlante/Sputnik Animation

Try to picture a proton — the minute, positively charged particle within an atomic nucleus — and you may imagine a familiar, textbook diagram: a bundle of billiard balls representing quarks and gluons. From the solid sphere model first proposed by John Dalton in 1803 to the quantum model put forward by Erwin Schrödinger in 1926, there is a storied timeline of physicists trying to visualize the invisible.

Now, MIT professor of physics Richard Milner, Jefferson Laboratory physicists Rolf Ent and Rik Yoshida, MIT documentary filmmakers Chris Boebel and Joe McMaster, and Sputnik Animation’s James LaPlante have teamed up to depict the subatomic world in a new way. Presented by MIT Center for Art, Science & Technology (CAST) and Jefferson Lab, “Visualizing the Proton” is an original animation of the proton, intended for use in high school classrooms. Ent and Milner presented the animation in contributed talks at the April meeting of the American Physics Society and also shared it at a community event hosted by MIT Open Space Programming on April 20. In addition to the animation, a short documentary film about the collaborative process is in progress. 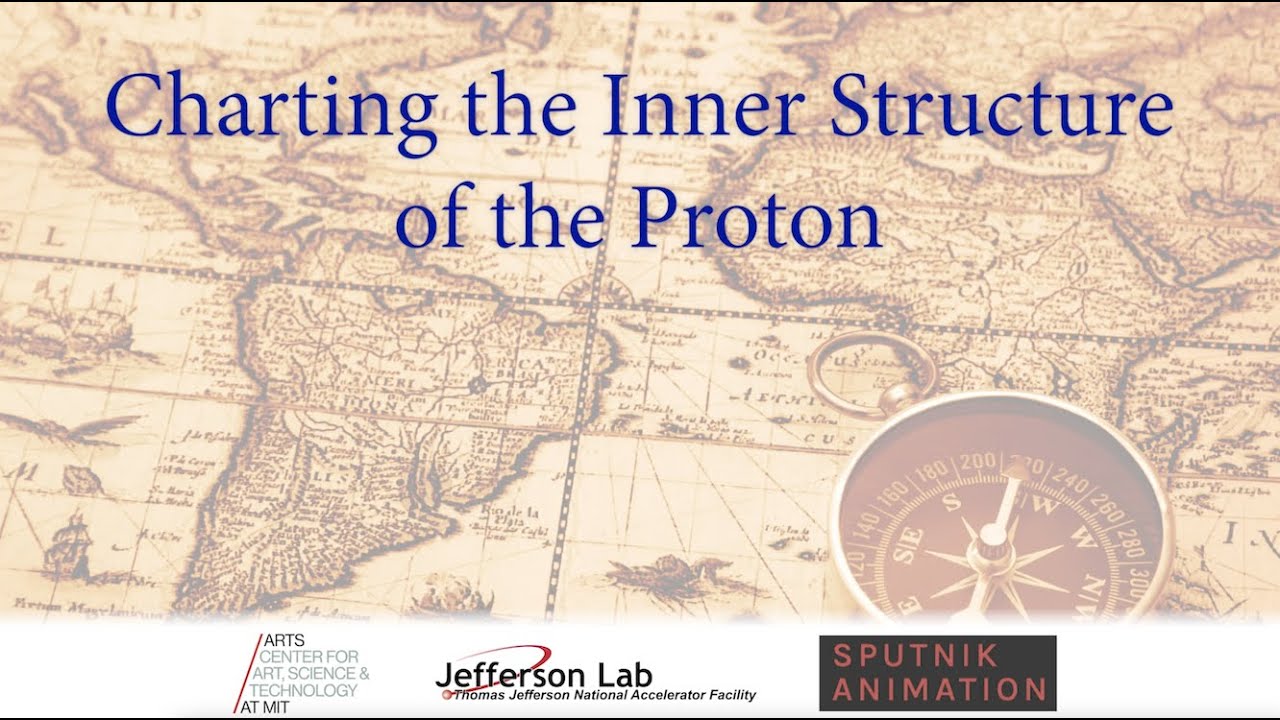 It’s a project that Milner and Ent have been thinking about since at least 2004 when Frank Wilczek, the Herman Feshbach Professor of Physics at MIT, shared an animation in his Nobel Lecture on quantum chromodynamics (QCD), a theory that predicts the existence of gluons in the proton. “There's an enormously strong MIT lineage to the subject,” Milner points out, also referencing the 1990 Nobel Prize in Physics, awarded to Jerome Friedman and Henry Kendall of MIT and Richard Taylor of SLAC National Accelerator Laboratory for their pioneering research confirming the existence of quarks.

For starters, the physicists thought animation would be an effective medium to explain the science behind the Electron Ion Collider, a new particle accelerator from the U.S. Department of Energy Office of Science — which many MIT faculty, including Milner, as well as colleagues like Ent, have long advocated for. Moreover, still renderings of the proton are inherently limited, unable to depict the motion of quarks and gluons. “Essential parts of the physics involve animation, color, particles annihilating and disappearing, quantum mechanics, relativity. It's almost impossible to convey this without animation,” says Milner.

In 2017, Milner was introduced to Boebel and McMaster, who in turn pulled LaPlante on board. Milner “had an intuition that a visualization of their collective work would be really, really valuable,” recalls Boebel of the project’s beginnings. They applied for a CAST faculty grant, and the team’s idea started to come to life.

“The CAST Selection Committee was intrigued by the challenge and saw it as a wonderful opportunity to highlight the process involved in making the animation of the proton as well as the animation itself,” says Leila Kinney, executive director of arts initiatives and of CAST. “True art-science collaborations are more complex than science communication or science visualization projects. They involve bringing together different, equally sophisticated modes of making creative discoveries and interpretive decisions. It is important to understand the possibilities, limitations, and choices already embedded in the visual technology selected to visualize the proton. We hope people come away with better understanding of visual interpretation as a mode of critical inquiry and knowledge production, as well as physics.”

Boebel and McMaster filmed the process of creating such a visual interpretation from behind the scenes. “It's always challenging when you bring together people who are truly world-class experts, but from different realms, and ask them to talk about something technical,” says McMaster of the team’s efforts to produce something both scientifically accurate and visually appealing. “Their enthusiasm is really infectious.”

In February 2020, animator LaPlante welcomed the scientists and filmmakers to his studio in Maine to share his first ideation. Although understanding the world of quantum physics posed a unique challenge, he explains, “One of the advantages I have is that I don't come from a scientific background. My goal is always to wrap my head around the science and then figure out, ‘OK, well, what does it look like?’”

Gluons, for example, have been described as springs, elastics, and vacuums. LaPlante imagined the particle, thought to hold quarks together, as a tub of slime. If you put your closed fist in and try to open it, you create a vacuum of air, making it harder to open your fist because the surrounding material wants to reel it in.

LaPlante was also inspired to use his 3D software to “freeze time” and fly around a motionless proton, only for the physicists to inform him that such an interpretation was inaccurate based on the existing data. Particle accelerators can only detect a two-dimensional slice. In fact, three-dimensional data is something scientists hope to capture in their next stage of experimentation. They had all come up against the same wall — and the same question — despite approaching the topic in entirely different ways.

“My art is really about clarity of communication and trying to get complex science to something that's understandable,” says LaPlante. Much like in science, getting things wrong is often the first step of his artistic process. However, his initial attempt at the animation was a hit with the physicists, and they excitedly refined the project over Zoom.

“There are two basic knobs that experimentalists can dial when we scatter an electron off a proton at high energy,” Milner explains, much like spatial resolution and shutter speed in photography. “Those camera variables have direct analogies in the mathematical language of physicists describing this scattering.”

As “exposure time,” or Bjorken-X, which in QCD is the physical interpretation of the fraction of the proton’s momentum carried by one quark or gluon, is lowered, you see the proton as an almost infinite number of gluons and quarks moving very quickly. If Bjorken-X is raised, you see three blobs, or Valence quarks, in red, blue, and green. As spatial resolution is dialed, the proton goes from being a spherical object to a pancaked object.

“We think we've invented a new tool,” says Milner. “There are basic science questions: How are the gluons distributed in a proton? Are they uniform? Are they clumped? We don't know. These are basic, fundamental questions that we can animate. We think it's a tool for communication, understanding, and scientific discussion.

“This is the start. I hope people see it around the world, and they get inspired.”

3 Questions: Richard Milner on the messier side of physics