Soft, pneumatic actuators might not be a phrase that comes up in daily conversations, but more likely than not you might have benefited from their utility. The devices use compressed air to power motion, and with sensing capabilities, they've proven to be a critical backbone in a variety of applications such as assistive wearables, robotics, and rehabilitative technologies.

But there’s a bit of a bottleneck in creating the little dynamic devices that have advantages like high response rates and power to input ratios. They require a manual design and fabrication pipeline, which translates to a lot of trial and error cycles to actually test and see whether the designs will work. 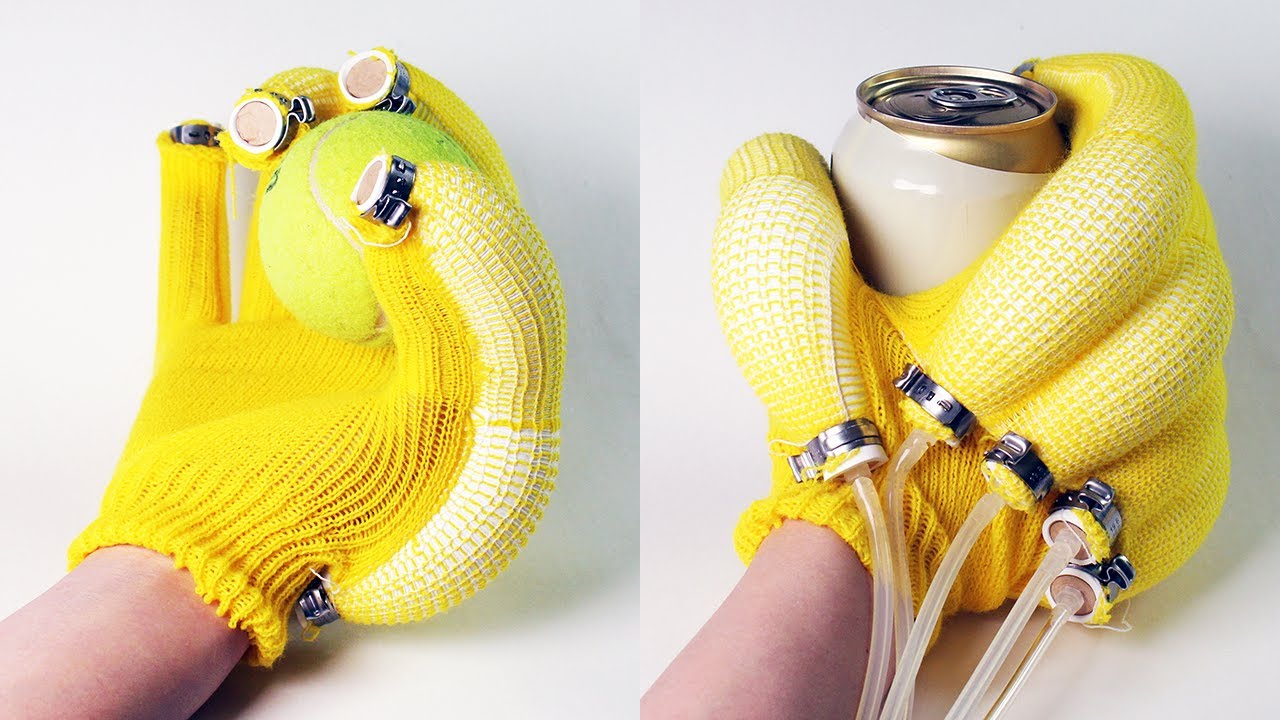 PneuAct uses a machine knitting process — not dissimilar to your grandma's plastic needle knitting — but this machine operates autonomously. A human designer simply specifies the stitch and sensor design patterns in software to program how the actuator will move, and it can then be simulated before printing. The textile piece is fabricated by the knitting machine, which can be fixed to an inexpensive, off-the-shelf rubber silicone tube to complete the actuator.

The knitted actuator integrates conductive yarn for sensing, allowing the actuators to "feel" what they touch. The team cooked up several prototypes spanning an assistive glove, a soft hand, an interactive robot, and a pneumatic walking quadruped. Their devices were wrapped in a soft, yellow fabric that made them look a little bit like banana fingers.

While there’s been plenty of movement in the hardware development of soft pneumatic actuators over the years — a 2019 prototype of a collaborative robot used such actuators to reproduce human-like gripping in its hands — the design tools haven’t improved with quite as much speed. Old processes have typically used polymers and molding, but the scientists used a combination of elastic and sensing stitches (with conductive yarn) that allows for programming bending of the devices when they’re inflated, and the ability to incorporate real world feedback.

For example, the team used the actuators to build a robot that sensed when it was touched specifically by human hands, and reacted to that touch.

The team’s glove can be worn by a human to supplement finger muscle movement, minimizing the amount of muscle activity needed to complete tasks and motions. This could hold a lot of potential for those with injury, limited mobility, or other trauma to the fingers. The method can also be used to make an exoskeleton (wearable robotic units controlled by a computer that supplement human motion and restore locomotion and movement); to that end the researchers made a sleeve that can help wearers bend their elbow, knee, or other body parts.

“Digital machine knitting, which is a very common manufacturing method in today’s textile industry, enables ‘printing’ a design in one go, which makes it much more scalable,” says Yiyue Luo, MIT CSAIL PhD student and lead author of a new paper about the research. “Soft pneumatic actuators are intrinsically compliant and flexible, and combined with intelligent materials, they’ve become a necessary force in many robots and assistive technologies — and rapid fabrication, with our design tool, can hopefully increase ease and ubiquity.”

One type of sensing the team incorporated was called “resistive pressure sensing,” where the actuator “sends” pressure. When fabricating a robotic gripper, it would try to grab onto something, and the pressure sensor would sense how much force was being applied to the object, and then it would try to see whether the grasp was successful or not. The other type is “capacitive sensing,” where the sensor discerns some information on the materials that the actuator is getting in touch with.

The actuators are sturdy — no yarn was harmed in the process. One limitation of the system is that they were limited to tube-shaped actuators, because it’s very easy to buy them off the shelf. A logical next step is exploring actuators of different shapes, to avoid being constrained by that single structure. Another extension the scientists will explore is extending the tool to incorporate a task-driven, optimization-based design, where users can specify target poses and optimal stitch patterns that can be automatically synthesized.

“Our software tool is fast, easy to use, and it accurately previews users' designs, allowing them to quickly iterate virtually while only needing to fabricate once. But this process still requires some trial-and-error from humans. Can a computer reason about how textiles should be physically programmed in actuators to allow for rich, sensing-driven behavior? That's the next frontier,” says Andrew Spielberg, postdoc in materials science and mechanical engineering at Harvard University, another author on the paper.

MIT scientists have created a new tool that can improve robotic wearables, reports Danica D’Souza for Mashable. “The tool provides a pipeline for digital creating pneumatic actuators – devices that power motion with compressed air in many wearables and robotics,” writes D’Souza.

CSAIL researchers have developed a robotic glove that utilizes pneumatic actuation to serve as an assistive wearable, reports Brian Heater for TechCrunch. “Soft pneumatic actuators are intrinsically compliant and flexible, and combined with intelligent materials, have become the backbone of many robots and assistive technologies – and rapid fabrication with our design tool can hopefully increase ease and ubiquity,” says graduate student Yiyue Luo.