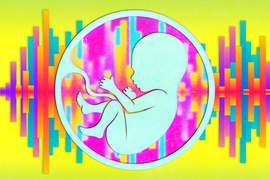 Inside the womb, fetuses can begin to hear some sounds around 20 weeks of gestation. However, the input they are exposed to is limited to low-frequency sounds because of the muffling effect of the amniotic fluid and surrounding tissues.

A new MIT-led study suggests that this degraded sensory input is beneficial, and perhaps necessary, for auditory development. Using simple computer models of the human auditory processing, the researchers showed that initially limiting input to low-frequency sounds as the models learned to perform certain tasks actually improved their performance.

Along with an earlier study from the same team, which showed that early exposure to blurry faces improves computer models’ subsequent generalization ability to recognize faces, the findings suggest that receiving low-quality sensory input may be key to some aspects of brain development.

“Instead of thinking of the poor quality of the input as a limitation that biology is imposing on us, this work takes the standpoint that perhaps nature is being clever and giving us the right kind of impetus to develop the mechanisms that later prove to be very beneficial when we are asked to deal with challenging recognition tasks,” says Pawan Sinha, a professor of vision and computational neuroscience in MIT’s Department of Brain and Cognitive Sciences, who led the research team.

In the new study, the researchers showed that exposing a computational model of the human auditory system to a full range of frequencies from the beginning led to worse generalization performance on tasks that require absorbing information over longer periods of time — for example, identifying emotions from a voice clip. From the applied perspective, the findings suggest that babies born prematurely may benefit from being exposed to lower-frequency sounds rather than the full spectrum of frequencies that they now hear in neonatal intensive care units, the researchers say.

Marin Vogelsang and Lukas Vogelsang, currently both students at EPFL Lausanne, are the lead authors of the study, which appears in the journal Developmental Science. Sidney Diamond, a retired neurologist and now an MIT research affiliate, is also an author of the paper.

Several years ago, Sinha and his colleagues became interested in studying how low-quality sensory input affects the brain’s subsequent development. This question arose in part after the researchers had the opportunity to meet and study a young boy who had been born with cataracts that were not removed until he was four years old.

This boy, who was born in China, was later adopted by an American family and referred to Sinha’s lab at the age of 10. Studies revealed that his vision was nearly normal, with one notable exception: He performed very poorly in recognizing faces. Other studies of children born blind have also revealed deficits in face recognition after their sight was restored.

The researchers hypothesized that this impairment might be a result of missing out on some of the low-quality visual input that babies and young children normally receive. When babies are born, their visual acuity is very poor — around 20/800, 1/40 the strength of normal 20/20 vision. This is in part because of the lower packing density of photoreceptors in the newborn retina. As the baby grows, the receptors become more densely packed and visual acuity improves.

“The theory we proposed was that this initial period of blurry or degraded vision was very important. Because everything is so blurry, the brain needs to integrate over larger areas of the visual field,” Sinha says.

To explore this theory, the researchers used a type of computational model of vision known as a convolutional neural network. They trained the model to recognize faces, giving it either blurry input followed later by clear input, or clear input from the beginning. They found that the models that received fuzzy input early on showed superior generalization performance on facial recognition tasks. Additionally, the neural networks’ receptive fields — the size of the visual area that they cover — were larger than the receptive fields in models trained on the clear input from the beginning.

After that study was published in 2018, the researchers wanted to explore whether this phenomenon could also be seen in other types of sensory systems. For audition, the timeline of development is slightly different, as full-term babies are born with nearly normal hearing across the sound spectrum. However, during the prenatal period, while the auditory system is still developing, babies are exposed to degraded sound quality in the womb.

Low frequency followed by full frequency most closely mimics what developing infants are exposed to, and the researchers found that the computer models exposed to that scenario exhibited the most generalized performance profile on the emotion recognition task. Those models also generated larger temporal receptive fields, meaning that they were able to analyze sounds occurring over a longer time period.

“It supports the idea that starting with very limited information, and then getting better and better over time might actually be a feature of the system rather than being a bug,” Lukas Vogelsang says.

Previous research done by other labs has found that babies born prematurely do show impairments in processing low-frequency sounds. They perform worse than full-term babies on tests of emotion classification, later in life. The MIT team’s computational findings suggest that these impairments may be the result of missing out on some of the low-quality sensory input they would normally receive in the womb.

“If you provide full-frequency input right from the get-go, then you are taking away the impetus on the part of the brain to try to discover long range or extended temporal structure. It can get by with just local temporal structure,” Sinha says. “Presumably that is what immediate immersion in full-frequency soundscapes does to the brain of a prematurely born child.”

The researchers suggest that for babies born prematurely, it could be beneficial to expose them to primarily low-frequency sounds after birth, to mimic the womb-like conditions they’re missing out on.

The research team is now exploring other areas in which this kind of degraded input may be beneficial to brain development. These include aspects of vision, such as color perception, as well as qualitatively different domains such as linguistic development.

“We have been surprised by how consistent the narrative and the hypothesis of the experimental results are, to this idea of initial degradations being adaptive for developmental purposes,” Sinha says. “I feel that this work illustrates the gratifying surprises science offers us. We did not expect that the ideas which germinated from our work with congenitally blind children would have much bearing on our thinking about audition. But, in fact, there appears to be a beautiful conceptual commonality between the two domains. And, maybe that common thread goes even beyond these two sensory modalities. There are clearly a host of exciting research questions ahead of us.”

Out of darkness, sight