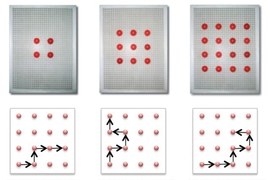 Caption:
MIT neuroscientists tested children's spatial imagery abilities by asking them to mentally trace paths along a grid.
Credits:
Image courtesy of the researchers
Try to conjure a mental image of your kitchen, or imagine the route that you take to work every day. For most people, this comes so naturally that we think nothing of it, but for neuroscientists, there is still much to learn about how the brain develops this critical skill, known as spatial imagery.

Sensory information from the eyes, ears, and sense of touch all contribute to our ability to imagine spatial structures, but questions remain about the influence of each sensory system. A new study from MIT neuroscientists suggests that visual input plays a special role in developing these skills, particularly for more complex tasks.

By studying children in India who were born blind but whose blindness could be treated, the researchers found that the children’s ability to perform more complex spatial imagery tasks improved markedly following surgery that restored their sight.

“Just four months of vision seems to have a significant impact on spatial imagery skills,” says Pawan Sinha, an MIT professor of brain and cognitive sciences and senior author of the paper. “That seems to be consistent with the greater richness of spatial information that vision provides. With audition and touch we get a coarser sense of the environment. With vision we have a much more fine-grained appreciation of the environment.”

The study, which appeared in a recent issue of the journal Psychological Science, grew out of Project Prakash, a charitable effort Sinha launched to identify and treat children in India suffering from curable forms of blindness, such as cataracts or corneal scarring.

Tapan Gandhi, a postdoc in Sinha’s lab, is the paper’s lead author; Suma Ganesh, an ophthalmologist at Dr. Shroff’s Charity Eye Hospital in New Delhi, is also an author.

The role of vision

“Blind individuals, even those who have been blind from birth, are not entirely at a loss for spatial abilities. Blind individuals can navigate through the environment, and that must tap into some imagery abilities,” Gandhi says. “However, some studies had indicated that blind individuals might be a little worse off relative to their sighted counterparts.”

These differences might result from lack of visual input, but could also stem from the more limited opportunities that blind people have to interact with their environment. “There’s still a question mark about the role of vision, despite the previous results,” Sinha says.

Studying the Project Prakash patients offered a unique opportunity to try to answer this question. But first, the researchers studied two other groups of children — 30 children whose blindness was not treatable, and 30 normally sighted children.

To test their spatial imagery skills, children were first given a pegboard with a grid of pegs arranged 2 by 2, 3 by 3, or 4 by 4. Sighted children were blindfolded during the task. After a child became familiar with the pegboard, it was taken away and the experimenter asked him or her to mentally trace a verbally described path (e.g. “right, up, right, up, left, right”) along the board, beginning from the lower left peg.

In their next set of tests, with 10 children treated through Project Prakash, the researchers investigated whether the onset of vision would improve performance.

“When they didn’t have visual experience, they were still able to perform very simple tasks, but not very complex tasks. But when they received sight after the surgery, they developed this ability very fast,” Gandhi says.

Albert Yonas, a professor of child psychology at the University of Minnesota, says the work takes a sophisticated approach to investigating vision’s role in spatial imagery. “One could ask a simple question, ‘Does visual experience influence imagery or not?’ Rather, this work varies the difficulty of the task and finds both no effects when representational demands are minimal and a large effect of experience when the task requires a flexible and extensive spatial representation,” says Yonas, who was not part of the research team.

The findings suggest that either there is no strictly defined time window for vision to contribute to spatial imagery ability, or that if there is a “critical period,” it extends at least into late adolescence, Sinha says.

The study also raises questions about how visual input affects the development of spatial imagery abilities, Sinha says. One major question is whether visual input changes the nature of the spatial representations used by blind children.

“The spatial information they develop about the environment through their tactile system could be qualitatively different from the spatial structures they develop through the use of vision,” Sinha says. “Or, it could be the case that vision simply elaborates the representations that they already possess.”

The researchers hope to answer this question by using functional magnetic resonance imaging (fMRI) to scan children’s brains as they perform spatial imagery tasks before and after being treated for blindness. Gandhi and Sinha are also interested in exploring whether there is any way to enhance spatial imagery abilities in blind children whose blindness is not treatable.

The study was funded by the James McDonnell Foundation and the National Eye Institute.

In an article for Science, Rhitu Chatterjee writes about Project Prakash, an effort started by Prof. Pawan Sinha to help children with preventable or treatable blindness see. Chatterjee writes that the project has brought hundreds of young people, “into the light—while putting the field of visual neuroscience in a new light as well.”