How Omicron escapes from antibodies 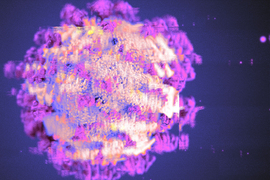 A new study from MIT suggests that the dozens of mutations in the spike protein of the Omicron variant help it to evade all four of the classes of antibodies that can target the SARS-CoV-2 virus that causes Covid-19.

This includes antibodies generated by vaccinated or previously infected people, as well as most of the monoclonal antibody treatments that have been developed, says Ram Sasisekharan, the Alfred H. Caspary Professor of Biological Engineering and Health Sciences and Technology (HST) at MIT.

Using a computational approach that allowed them to determine how mutated amino acids of the viral spike protein influence nearby amino acids, the researchers were able to get a multidimensional view of how the virus evades antibodies. According to Sasisekharan, the traditional approach of only examining changes in the virus’ genetic sequence reduces the complexity of the spike protein’s three-dimensional surface and doesn’t describe the multidimensional complexity of the protein surfaces that antibodies are attempting to bind to.

“It is important to get a more comprehensive picture of the many mutations seen in Omicron, especially in the context of the spike protein, given that the spike protein is vital for the virus’s function, and all the major vaccines are based on that protein,” he says. “There is a need for tools or approaches that can rapidly determine the impact of mutations in new virus variants of concern, especially for SARS-CoV-2.”

Sasisekharan is the senior author of the study, which appears this week in Cell Reports Medicine. The lead author of the paper is MIT HST graduate student Nathaniel Miller. Technical associate Thomas Clark and research scientist Rahul Raman are also authors of the paper.

Even though Omicron is able to evade most antibodies to some degree, vaccines still offer protection, Sasisekharan says.

“What’s good about vaccines is they don’t just generate B cells, which produce the monoclonal [antibody] response, but also T cells, which provide additional forms of protection,” he says.

After the Omicron variant emerged last November, Sasisekharan and his colleagues began to analyze its trimeric spike protein using a network-based computational modeling method they had originally developed several years ago to study the hemagglutinin spike protein on flu viruses. Their technique allows them to determine how mutations in the genetic sequence are related in the three-dimensional space through a network of inter-amino-acid interactions that critically impact the structure and function of the viral protein.

The researchers’ approach, known as amino acid interaction network analysis, evaluates how one mutated amino acid can influence nearby amino acids depending on how “networked” they are — a measure of how much a given amino acid interacts with its neighbors. This yields richer information than simply examining individual changes in the one-dimensional amino acid sequence space, Sasisekharan says.

Sasisekharan’s lab has previously used this technique to determine how mutations in the hemagglutinin protein of an avian flu virus could help it to infect people. In that study, he and his laboratory identified mutations that could change the structure of hemagglutinin so that it could bind to receptors in the human respiratory tract.

When Omicron emerged, with about three dozen mutations on the spike protein, the researchers decided to rapidly use their method to study the variant’s ability to evade human antibodies. They focused their analysis on the receptor binding domain (RBD), which is the part of the spike protein targeted by antibodies. The RBD is also the part of the viral protein that attaches to human ACE2 receptors and allows the virus to enter cells.

Using their network modeling approach, the researchers studied how each of the mutations on the RBD changes the protein’s shape and affect its interactions with four classes of human antibodies that target SARS-CoV-2. Class 1 and 2 antibodies target the RBD site that binds to the ACE2 receptor, while class 3 and 4 antibodies bind to other parts of the RBD.

“With Omicron you can see a significant number of sites being perturbed compared to Beta and Delta,” Sasisekharan says. “From the original strain to the Beta strain, and then the Delta strain, there is a general trend towards a greater ability to escape.” Those perturbations allow the virus to evade not only antibodies generated by vaccination or previous SARS-CoV-2 infection, but also many of the monoclonal antibody treatments that pharmaceutical companies have developed.

As patients began to appear with Omicron infections, researchers and pharmaceutical companies sought to guide treatment by predicting which antibodies were most likely to retain their efficacy against the new variant.

Based on their one-dimensional sequence and single point mutation analyses, pharmaceutical companies believed that their monoclonal antibodies were likely to bind Omicron and not lose any potency. However, when experimental data became available, the Omicron variant was found to substantially escape from monoclonal antibodies known as ADG20, AZD8895, and AZD1061, as predicted by the network analyses in this study, while the activity of monoclonal antibody S309 was also reduced by threefold.

Additionally, the study revealed that some of the mutations in the Omicron variant make it more likely that the RBD will exist in a configuration that makes it easier to grab onto the ACE2 receptor, which may contribute to its enhanced transmissibility.

The researchers plan to use the tools described in this paper to analyze future variants of concern that may emerge.

The findings from the new study could help to identify regions of the RBD that could be targeted with future vaccines and therapeutic antibodies. The Sasisekharan lab has previously engineered a therapeutic antibody that potently and specifically neutralized the Zika virus by targeting a highly networked envelope surface protein of the Zika virus. Sasisekharan hopes to identify RBD sites where mutations would be harmful to the SARS-CoV-2 virus, making it harder for the virus to escape antibodies that target those regions.

“Our hope is that as we understand the viral evolution, we’re able to hone in on regions where we think that any perturbation would cause instability to the virus, so that they would be the Achilles heels, and more effective sites to target,” he says.

To create more effective antibody treatments, Sasisekharan believes it may be necessary to develop cocktails of antibodies that target different parts of the spike protein. Those combinations would likely need to include class 3 and 4 antibodies, which appear to offer fewer escape routes for the virus to evade them, he says.

The research was funded by the National Institutes of Health and the Singapore-MIT Alliance for Research and Technology.