John Tirman, political theorist and executive director of the MIT Center for International Studies, dies at 72 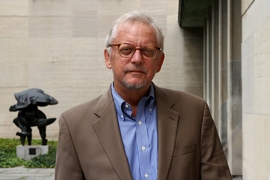 ↓ Download Image
Caption: John Tirman, an MIT scholar in political theory and expert on U.S.-Iran relations and human security, has died at age 72. Tirman served as the executive director of and principal research scientist at the MIT Center for International Studies.
Credits: Photo: Allegra Boverman

Caption:
In addition to service at the Center for International Studies, John Tirman wrote more than 100 articles for popular media and coauthored and edited more than 15 books on international affairs, including, most recently, “Republics of Myth: National Narratives and the US-Iran Conflict.”
Credits:
Photo: Allegra Boverman

John Tirman, an MIT scholar in political theory and expert on U.S.-Iran relations and human security, passed away on the morning of Aug. 19 after suffering cardiac arrest. He was 72.

Since 2004, Tirman served as the executive director of and principal research scientist at the MIT Center for International Studies (CIS). During this time, he was a prolific and thoughtful — but always modest — leader of many of the center’s initiatives.

He spearheaded several projects on U.S.-Iran relations, and convened conferences and published on the regional dimension of the Iraq War, the role of terrorism in upsetting diplomatic relations, and the challenges of political instability in the Persian Gulf. He also wrote extensively on the human costs of war to civilian populations in war zones and about forced migration.

Tirman coauthored and edited more than 15 books on international affairs, including, most recently, “Republics of Myth: National Narratives and the US-Iran Conflict” (Johns Hopkins University Press, 2022), “Dream Chasers: Immigration and the American Backlash” (MIT Press, 2015), and “The Deaths of Others: The Fate of Civilians in America’s Wars” (Oxford University Press, 2011).

Earlier work included: “Women, Migration, and Conflict: Breaking a Deadly Cycle” (Springer, 2009); a special post-9/11 series jointly organized by The New Press and the Social Science Research Council, “The Maze of Fear: Security and Migration After 9/11;” “The Fallacy of Star Wars” (1984), the first important critique of strategic defense; and “Spoils of War: The Human Cost of America's Arms Trade” (1997).

In addition, he published more than 100 articles in periodicals such as The Nation, The Boston Globe, The New York Times, The Washington Post, Esquire, The Wall Street Journal, and Boston Review.

“John was an exceptionally able and reliable partner in the leadership of CIS,” shares Richard Samuels, director of CIS and Ford International Professor of Political Science. “Apart from managing a large swath of administrative responsibilities, he sustained a steady and prolific agenda of research and publishing. The center and the larger intellectual community benefited immeasurably from John’s commitment to explore the intersection of human security and international affairs — what he referred to as ‘the consequences of war for the innocent people caught up in conflict.’ What was there not to admire in this fine public intellectual?”

“John was a good friend, capable administrator, and fine scholar. Most significantly, he was the conscience of our center, with an intense commitment to human rights, justice, and truth,” says Kenneth Oye, director of the CIS Program on Emerging Technologies and professor of political science and of data systems and society. “John walked the walk with hardheaded assessments of the civilian costs of war. John supported those who had the guts to reach across lines of ethnic and religious conflict. John brought new scholarship to CIS by inviting senior practitioners to MIT through the Robert E Wilhelm Fellowship Program. John supported truth tellers by helping bring courageous journalists from conflict zones to MIT through the Neuffer Program and by encouraging reporting on the front lines through the Institute for War Peace Reporting. He will be sorely missed.”

“For women faculty in CIS, like me, his support was particularly critical — he cared deeply that everyone was at the table and had a voice,” says Elizabeth Wood, MIT professor of history and co-director of the MIT-Eurasia Program. “He had an outsized influence in making the center an outstanding place for talk that led to new thinking, for talk that meant people cared deeply about their ideas and how they affected the world as a whole.”

Anat Biletzki, a CIS research affiliate and co-founding director with Tirman of the center’s Human Rights and Technology Program, says, “working with John on the Human Rights and Technology program meant putting together MIT’s strengths in technology (and amazing students centered on technology) with the call for morality that must never be ignored, especially in technology. The strength of that combination received, in John’s hands, a focus of modest excellence that we must continue to uphold in his memory. I think of him as the paradigm of Hannah Arendt’s concept of 'radical goodness.'” Biletzki is the Albert Schweitzer Professor of Philosophy at Quinnipiac University.

Before coming to MIT in 2004, Tirman was program director of the Social Science Research Council. From 1986 to 1999, he was executive director of the Winston Foundation for World Peace, a leading funder of work to prevent nuclear war and promote nonviolent resolution of conflict. In 1999–2000, he was Fulbright Senior Scholar in Cyprus and produced an educational website on the conflict. He has been a trustee of International Alert, Mother Jones magazine, the Institute for War and Peace Reporting, and the Center for Contemporary Art at Nanyang Technological University in Singapore.

“John’s early support through the Winston Foundation was crucial to the National Security Archive's work on Iran. He later brought together a wonderful group to launch a full-scale project on the rocky history of U.S.-Iran relations. His love of international affairs, his deep passion for exploring and disseminating knowledge, especially on basic human subjects like casualties of war, his leadership and initiative, his warm and generous friendship and encouragement, and over these last months his dignity in facing serious health issues have touched many of us permanently,” says Malcolm Byrne, a CIS research affiliate and a co-author with Tirman on his latest book, “Republics of Myth.” Byrne is the deputy director and research director of the National Security Archive at George Washington University.

“It's not an exaggeration in the least to say that I partly owe my academic career and life trajectory to him,” says Hussein Banai, a CIS research affiliate, co-author with Tirman and Byrne on “Republics of Myth,” and associate professor at the Hamilton Lugar School of Global and International Studies at Indiana University Bloomington. “He was a mentor, generous benefactor, intellectual resource, and a kind, dear friend. I will miss his erudition, the warmth of his presence, and his acerbic charm.”

Tirman studied at Indiana University, graduating with a BA in 1972. He received his doctorate from Boston University. His mentors included Howard Zinn, Frances Fox Piven, Murray Levin, and Alasdair MacIntyr.

“As engaged and passionate as he was about his research, John brought this same dedication as a father to our cherished daughter Coco, and to so many other outside interests that he shared with us, including his love for travel,” says Nike Tirman, his former wife and mother to Coco Tirman.

The center and Tirman's family will host a memorial event in his honor. Please contact Michelle English if you would like to submit a personal tribute and to stay apprised of the forthcoming activity.

3Q: John Tirman on a new US human rights commission

3 Questions: How political science contributes to national policies on immigration and military conflict