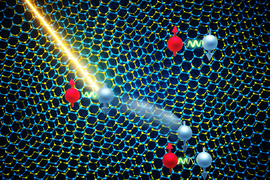 ↓ Download Image
Caption: In the moiré superlattice of trilayer graphene and hBN, a localized electron absorbs a photon and hops to a neighboring site.
Credits: Image: Ella Maru Studio 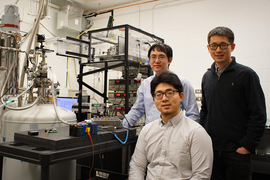 Caption:
In the moiré superlattice of trilayer graphene and hBN, a localized electron absorbs a photon and hops to a neighboring site.
Credits:
Image: Ella Maru Studio

In recent years, physicists have discovered materials that are able to switch their electrical character from a metal to an insulator, and even to a superconductor, which is a material in a friction-free state that allows electrons to flow with zero resistance. These materials, which include “magic-angle” graphene and other synthesized two-dimensional materials, can shift electrical states depending on the voltage, or current of electrons, that is applied.

The underlying physics driving these switchable materials is a mystery, though physicists suspect it has something to do with “electron correlations,” or effects from the interaction felt between two negatively charged electrons. These particle repulsions have little to no effect in shaping the properties in most materials. But in two-dimensional materials, these quantum interactions can be a dominating influence. Understanding how electron correlations drive electrical states can help scientists engineer exotic functional materials, such as unconventional superconductors.

Now, physicists at MIT and elsewhere have taken a significant step toward understanding electron correlations. In a paper appearing today in Science, the researchers reveal direct evidence of electron correlations in a two-dimensional material called ABC trilayer graphene. This material has previously been shown to switch from a metal to an insulator to a superconductor.

For the first time, the researchers directly detected electron correlations in a special insulating state of the material. They also quantified the energy scales of these correlations, or the strength of the interactions between electrons. The results demonstrate that ABC trilayer graphene can be an ideal platform to explore and possibly engineer other electron correlations, such as those that drive superconductivity.

“Better understanding of the underlying physics of superconductivity will allow us to engineer devices that could change our world, from zero-loss energy transmission to magnetically levitating trains,” says lead author Long Ju, assistant professor of physics at MIT. “This material is now a very rich playground to explore electron correlations and build even more robust phenomena and devices.”

An ABC trilayer graphene, stacked atop a layer of hexagonal boron nitride, is similar to the more well-studied magic-angle bilayer graphene, in that both materials involve layers of graphene — a material that is found naturally in graphite and can exhibit exceptional properties when isolated in its pure form. Graphene is made from a lattice of carbon atoms arranged in a hexagonal pattern, similar to chicken wire. Hexagonal boron nitride, or hBN, has a similar, slightly larger hexagonal pattern.

In ABC trilayer graphene, three graphene sheets are stacked at the same angle and slightly offset from each other, like layered slices of cheese. When ABC trilayer graphene sits on hBN at a zero-degree twist angle, the resulting structure is a moiré pattern, or “superlattice,” made up of periodic energy wells, the configuration of which determines how electrons flow through the material.

“This lattice structure forces electrons to localize, and sets the stage for electron correlations to have a huge impact on the material’s macroscopic property,” Ju says.

He and his colleagues sought to probe ABC trilayer graphene for direct evidence of electron correlations and to measure their strength. They first synthesized a sample of the material, creating a superlattice with energy wells, each of which can normally hold two electrons. They applied just enough voltage to fill each well in the lattice.

They then looked for signs that the material was in an ideal state for electron correlations to dominate and affect the material’s properties. They specifically looked for signs of a “flat band” structure, where all electrons have almost the same energy. The team reasoned that an environment hosting electrons with a wide range of energies would be too noisy for the tiny energy of electron correlations to have an effect. A flatter, quieter environment would allow for these effects to come through.

The team used a unique optical technique they developed to confirm that the material indeed has a flat band. They then tuned down the voltage slightly, so that only one electron occupied each well in the lattice. In this “half-filled” state, the material is considered a Mott insulator — a curious electrical state that should be able to conduct electricity like metal, but instead, due to electron correlations, the material behaves as an insulator.

Ju and his colleagues wanted to see if they could detect the effect of these electron correlations in a half-filled, Mott insulating state. They looked to see what would happen if they disturbed the state by moving electrons around. If electron correlations have any effect, such perturbations of electron configurations would meet resistance, since electrons naturally repel each other. For example, an electron that attempts to move to a neighboring well would be pushed back by the electron already occupying that well, even if that well can technically accommodate an additional electron.

In order to overcome this resistance, it would require an extra boost of energy — just enough to overcome the electron’s natural repulsion. The team reasoned that the magnitude of this boost would be a direct measure of the electron correlation’s strength.

The researchers supplied the extra boost using light. They shone light of different colors, or wavelengths, onto the material, and looked for a peak, or a single specific wavelength that the material absorbed. This wavelength corresponded to a photon with just enough energy to kick an electron into a neighboring half-filled well.

In their experiment, the team indeed observed a peak — the first direct detection of electron correlations in this specific moiré superlattice material. They then measured this peak to quantify the correlation energy, or the strength of the electron’s repulsive force. They determined this to be about 20 millielectronvolts, or 1/50 of an electronvolt.

The results show that strong electron correlations underlie the physics of this particular 2D material. Ju says the Mott insulating state is particularly important, as it is the parent state of unconventional superconductivity, the physics of which remains illusive. With this new study, the team has demonstrated that ABC trilayer graphen/hBN moiré superlattice is an ideal platform to explore and engineer the more exotic electrical states, including the unconventional superconductivity.

“Today, superconductivity happens only at very low temperatures in a realistic setting,” notes Ju, who says the team’s optical technique can be applied to other 2D materials to reveal similar exotic states. “If we can understand the mechanism of unconventional superconductivity, maybe we can boost that effect to higher temperatures. This material forms a foundation to understand and engineer even more robust electrical states and devices.”

This research was supported, in part, by the National Science Foundation, the Simons Foundation, and the MIT Skoltech program.