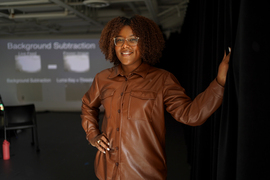 Chelsi Cocking is an interdisciplinary artist who explores the human body with the help of computers. For her work, she develops sophisticated software to use as her artistic tools, including facial detection techniques, body tracking software, and machine learning algorithms.

Cocking’s interest in the human body stems from her childhood training in modern dance. Growing up in Kingston, Jamaica, she equally loved the arts and sciences, refusing to pick one over the other. For college, “I really wanted to find a way to do both, but it was hard,” she says. “Luckily, through my older brother, I found [the field of] computational media at Georgia Tech.” There, she learned to develop technology for computer-based media, such as animation and graphics.

In her final year of undergrad, Cocking took a studio class where she worked with two other students on a dance performance piece. Together, they tracked the movements of three local dancers and projected visualizations of these movements in real-time. Cocking quickly fell in love with this medium of computational art. But before she could really explore it, she graduated and left to start a full-time job in product design that she had already lined up.

Cocking worked in product design for four years, first at a startup, then at Dropbox. “In the back of my mind, I always wanted to go back to grad school” to continue exploring computational art, she says. “But I didn’t really have the courage to do so.” When the pandemic hit and everything moved online, she saw an opportunity to chase her dreams. With encouragement from her family, she sought out online courses at the School for Poetic Computation, while still keeping her day job. As soon as she started, everything clicked: “This is what I want to do,” she says.

Through the school, Cocking heard that her current advisor, Zach Lieberman, an adjunct associate professor in the Media Lab, had an opening in his research group, the Future Sketches group. Now, she spends each day exploring new ideas for making art through computation. “Fun is enough justification for my research,” she says.

A long-awaited return to computational art

When Cocking first joined the Future Sketches group last fall, she was filled with ideas and armed with strong design skills, which she had developed as a product designer. But she had also been on a four-year hiatus from full-time coding and needed to get back in shape. After consulting with Lieberman, she set out on a project where she could ramp up her coding skills while still exploring her interests in the human body.

For this project, Cocking delved into a new medium: photography. In a series of images entitled Photorythms, she took photographic portraits of people and manipulated them using techniques from facial detection. “Within facial detection, you get 68 points of your face,” she says. “Using those points, you can manipulate how the image looks to create more expressive portrait photography.” Many of her images slice portraits using a particular shape, such as concentric rings or vertical stripes, and reassemble them in different configurations, reminiscent of cubism.

Through Photorythms, Cocking also adopted a practice of “daily sketching” from her advisor, where she develops new code every day to generate a new piece of art. If the resulting work turns out to be something she’s proud of, she shares it with the world, sometimes through Instagram. But “even if the code doesn’t amount to anything, [I’m] sharpening [my] coding skills every day,” she says.

Now that she’s reacclimated to intensive coding, “I really want to dive into body tracking this summer,” Cocking says. She’s currently in the ideation phase, brainstorming different ways to interactively combine body tracking and live performance. “I am half-scared and half-excited,” she says.

To help generate ideas, she’s participating in an intensive five-day workshop in early July that will bring together artists interested in computational art for dance. Cocking plans to attend the workshop with her best friend from college, Raianna Brown, who’s a dancer. “We’re going to be there for a week in Chatham [UK], just playing around with choreography and code,” she says. “Hopefully that can spark new ideas and new relationships” for future collaborations.

Spreading love for coding and design

Throughout her circuitous and hard-working journey to computational art, “I’ve never taken the position that I was in for granted,” Cocking says. She recognizes the value of having access to opportunities from her own experience, with a self-sustaining cycle of access in one place opening doors for her in another place. But “there’s so many people that I’m surrounded by who are intelligent and talented but don’t have access to opportunities,” especially in computer science and design, she says. Because of this, since college, Cocking has devoted some of her time to providing access to these fields to children and young professionals from underrepresented backgrounds.

This past spring, Cocking worked with fellow Media Lab student Cecilé Sadler to develop a workshop for introducing kids to coding concepts in a fun way. The two partners taught the workshop in parallel at different places in May and June: Sadler taught a series in Cambridge in collaboration with blackyard, a grassroots organization centering Black, Indigenous, and POC youth, while Cocking returned to her home country of Jamaica and taught at the Freedom Skatepark youth center near Kingston.

To get the workshop curriculum to Jamaica, Cocking reached out to her friend Rica G., who teaches computer science at the Freedom Skatepark youth center. Together, they co-taught the curriculum over several weeks. “I was so nervous [the kids] would just walk out,” Cocking says. “But they actually liked it!”

Cocking hopes to use this workshop as a stepping stone to someday establish “a core center for kids in Jamaica to explore creative coding or computational art,” she says. “Hopefully people will see coding as a tool for creation and expression without feeling intimidated, and use it to make the world a little weirder.”

Design in a major key