Could we make cars out of petroleum residue? 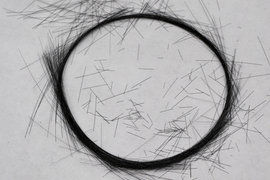 ↓ Download Image
Caption: A circle of carbon fibers which have a diameter of about 10 micrometers.
Credits: Photo: Nicola Ferralis 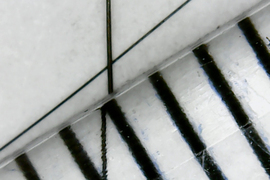 ↓ Download Image
Caption: A human hair and carbon fiber, with a clear ruler on the bottom half of the image. The human hair, pictured in a vertical orientation, is thicker (about 60 micrometers) than the carbon fiber behind it.
Credits: Photo: Nicola Ferralis

Caption:
A circle of carbon fibers which have a diameter of about 10 micrometers.
Credits:
Photo: Nicola Ferralis

Caption:
A human hair and carbon fiber, with a clear ruler on the bottom half of the image. The human hair, pictured in a vertical orientation, is thicker (about 60 micrometers) than the carbon fiber behind it.
Credits:
Photo: Nicola Ferralis

As the world struggles to improve the efficiency of cars and other vehicles in order to curb greenhouse gas emissions and improve the range of electric vehicles, the search is on for ever-lighter materials that are strong enough to be used in the bodies of cars.

Lightweight materials made from carbon fiber, similar to the material used for some tennis rackets and bicycles, combine exceptional strength with low weight, but these have been more expensive to produce than comparable structural elements made of steel or aluminum. Now, researchers at MIT and elsewhere have come up with a way of making these lightweight fibers out of an ultracheap feedstock: the heavy, gloppy waste material left over from the refining of petroleum, material that refineries today supply for low-value applications such as asphalt, or eventually treat as waste.

Not only is the new carbon fiber cheap to make, but it offers advantages over the traditional carbon fiber materials because it can have compressional strength, meaning it could be used for load-bearing applications. The new process is described today in the journal Science Advances, in a paper by graduate student Asmita Jana, research scientist Nicola Ferralis, professor Jeffrey Grossman, and five others at MIT, Western Research Institute in Wyoming, and Oak Ridge National Laboratory in Tennessee.

The research began about four years ago in response to a request from the Department of Energy, which was seeking ways to make cars more efficient and reduce fuel consumption by lowering their overall weight. “If you look at the same model car now, compared to 30 years ago, it’s significantly heavier,” Ferralis says. “The weight of cars has increased more than 15 percent within the same category.”

A heavier car requires a bigger engine, stronger brakes, and so on, so the reducing the weight of the body or other components has a ripple effect that produces additional weight savings. The DOE is pushing for the development of lightweight structural materials that match the safety of today’s conventional steel panels but also can be made cheaply enough to potentially replace steel altogether in standard vehicles.

Composites made from carbon fibers are not a new idea, but so far in the automotive world they have only been used in a few very expensive models. The new research aims to turn that around by providing a low-cost starting material and relatively simple processing methods.

Carbon fibers of the quality needed for automotive use cost at least $10 to $12 per pound currently, Ferralis says, and “can be way more,” up to hundreds of dollars a pound for specialized application like spacecraft components. That compares to about 75 cents a pound for steel, or $2 for aluminum, though these prices fluctuate widely, and the materials often rely on foreign sources. At those prices, he says, making a pickup truck out of carbon fiber instead of steel would roughly double the cost.

These fibers are typically made from polymers (such as polyacrilonitrile) derived from petroleum, but use a costly intermediate step of polymerizing the carbon compounds. The cost of the polymer can account for more than 60 percent of the total cost of the final fiber, Ferralis says. Instead of using a refined and processed petroleum product to start with, the team’s new approach uses what is essentially the dregs left after the refining process, a material known as petroleum pitch. “It’s what we sometimes call the bottom of the barrel,” Ferralis says.

“Pitch is incredibly messy,” he says. It’s a hodgepodge of mixed heavy hydrocarbons, and “that’s actually what makes it beautiful in a way, because there’s so much chemistry that can be exploited. That makes it a fascinating material to start with.”

It’s useless for combustion; although it can burn, it’s too dirty a fuel be practical, and this is especially true with tightening environmental regulations. “There’s so much of it,” he says, “the inherent value of these products is very low, so then it is often landfilled.” An alternative source of pitch, which the team also tested, is coal pitch, a similar material that is a byproduct of coking coal, used for example for steel production. That process yields about 80 percent coke and 20 percent coal pitch, “which is basically a waste,” he says.

Working in collaboration with researchers at Oak Ridge National Laboratory, who had the expertise in manufacturing carbon fibers under a variety of conditions, from lab scale all the way up to pilot-plant scale, the team set about finding ways to predict the performance in order to guide the choice of conditions for those fabrication experiments.

By carefully modeling the ways bonds form and crosslink between the constituent molecules, Jana was able to develop a way of predicting how a given set of processing conditions would affect the resulting fiber properties. “We were able to reproduce the results with such startling accuracy,” she says, “to the point where companies could take those graphs and be able to predict” characteristics such as density and elastic modulus of the fibers.

The work produced results showing by adjusting the starting conditions, carbon fibers could be made that were not only strong in tension, as most such fibers are, but also strong in compression, meaning they could potentially be used in load-bearing applications. This opens up entirely new possibilities for the usefulness of these materials, they say.

DOE’s call was for projects to bring the cost of lightweight materials down below $5 a pound, but the MIT team estimates that their method can to do better than that, reaching something like $3 a pound, though they haven’t yet done a detailed economic analysis.

“The new route we’re developing is not just a cost effect,” Ferralis says. “It might open up new applications, and it doesn’t have to be vehicles.” Part of the complication of making conventional fiber composites is that the fibers have to be made into a cloth and laid out in precise, detailed patterns. The reason for that, he says, “is to compensate for the lack of compressive strength.” It’s a matter of engineering to overcome the deficiencies of the material, he says, but with the new process all that extra complexity would not be needed.

The research team included Taishan Zhu and Yanming Wang at MIT, Jeramie Adams at the Western Research Institute, and Logan Kearney and Amit Naskar at Oak Ridge National Laboratory. The work was supported by the U.S. Department of Energy.

Daily Beast reporter Miriam Fauzia writes that MIT researchers have developed a new way to create carbon fibers that are stronger and lighter than steel, using leftover waste from crude oil processing. “The new findings could usher in an age of heavy-duty cars that consume less fuel thanks to their decreased weight,” writes Fauzia.

Hill reporters Saul Elbein and Sharon Udasin spotlight how MIT researchers have developed a way to make lightweight fibers for possible use in the bodies of cars out of the waste material from the refining of petroleum. “The ‘heavy, gloppy’ leftovers from the petroleum refining process could become a key ingredient in making electric vehicles lighter, less expensive and more efficient,” they write.

Making electronics out of coal