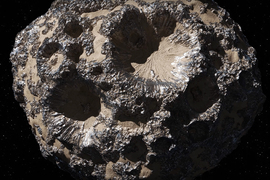 ↓ Download Image
Caption: Astronomers at MIT and elsewhere have mapped the composition of asteroid Psyche, revealing a surface of metal, sand, and rock.
Credits: Credit: Screenshot courtesy of NASA

Caption:
Astronomers at MIT and elsewhere have mapped the composition of asteroid Psyche, revealing a surface of metal, sand, and rock.
Credits:
Credit: Screenshot courtesy of NASA

Later this year, NASA is set to launch a probe the size of a tennis court to the asteroid belt, a region between the orbits of Mars and Jupiter where remnants of the early solar system circle the sun. Once inside the asteroid belt, the spacecraft will zero in on Psyche, a large, metal-rich asteroid that is thought to be the ancient core of an early planet. The probe, named after its asteroid target, will then spend close to two years orbiting and analyzing Psyche’s surface for clues to how early planetary bodies evolved.

Ahead of the mission, which is led by principal investigator Lindy Elkins-Tanton ’87, SM ’87, PhD ’02, planetary scientists at MIT and elsewhere have now provided a sneak peak of what the Psyche spacecraft might see when it reaches its destination.

In a paper appearing today in the Journal of Geophysical Research: Planets, the team presents the most detailed maps of the asteroid’s surface properties to date, based on observations taken by a large array of ground telescopes in northern Chile. The maps reveal vast metal-rich regions sweeping across the asteroid’s surface, along with a large depression that appears to have a different surface texture between the interior and its rim; this difference could reflect a crater filled with finer sand and rimmed with rockier materials.

Overall, Psyche’s surface was found to be surprisingly varied in its properties.

The new maps hint at the asteroid’s history. Its rocky regions could be vestiges of an ancient mantle — similar in composition to the rocky outermost layer of Earth, Mars, and the asteroid Vesta — or the imprint of past impacts by space rocks. Finally, craters that contain metallic material support the idea proposed by previous studies that the asteroid may have experienced early eruptions of metallic lava as its ancient core cooled.

The surface of Psyche has been a focus of numerous previous mapping efforts. Researchers have observed the asteroid using various telescopes to measure light  emitted from the asteroid at infrared wavelengths, which carry information about Psyche’s surface composition. However, these studies could not spatially resolve variations in composition over the surface.

Cambioni and his colleagues instead were able to see Psyche in finer detail, at a resolution of about 20 miles per pixel, using the combined power of the 66 radio antennas of the Atacama Large Millimeter/submillimeter Array (ALMA) in northern Chile. Each antenna of ALMA measures light emitted from an object at millimeter wavelengths, within a range that is sensitive to temperature and certain electrical properties of surface materials.

“The signals of the ALMA antennas can be combined into a synthetic signal that’s equivalent to a telescope with a diameter of 16 kilometers (10 miles),” de Kleer says. “The larger the telescope, the higher the resolution.”

On June 19, 2019, ALMA focused its entire array on Psyche as it orbited and rotated within the asteroid belt. De Kleer collected data during this period and converted it into a map of thermal emissions across the asteroid’s surface, which the team reported in a 2021 study. Those same data were used by Shepard to produce the most recent high-resolution 3D shape model of Psyche, also published in 2021. 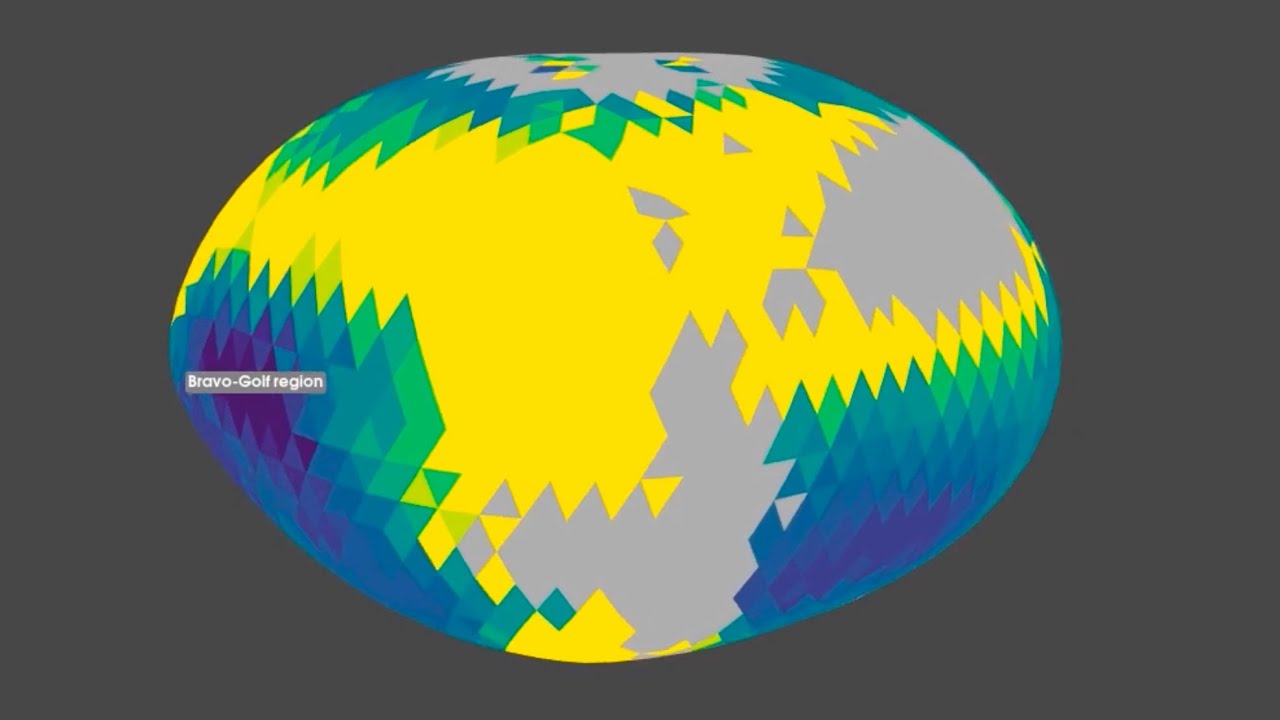 Play video
On the left, this map shows surface properties on Psyche, from sandy areas (purple/low) to rocky areas (yellow/high). The map on the right shows metal abundances on Psyche, from low (purple) to high (yellow).

To catch a match

“We ran these simulations area by area so we could catch differences in surface properties,” Cambioni says.

The study produced detailed maps of Psyche’s surface properties, showing that the asteroid’s façade is likely covered in a large diversity of materials. The researchers confirmed that, overall, Psyche’s surface is rich in metals, but the abundance of metals and silicates varies across its surface. This may be a further hint that, early in its formation, the asteroid may have had a silicate-rich mantle that has since disappeared.

They also found that, as the asteroid rotates, the material at the bottom of a large  depression — likely a crater — changes temperature much faster than material along the rim. This suggests that the crater bottom is covered in “ponds” of fine-grained material, like sand on Earth, which heats up quickly, whereas the crater rims are composed of rockier, slower-to-warm materials.

“These data show that Psyche’s surface is heterogeneous, with possible remarkable variations in composition,” says Simone Marchi, staff scientist at the Southwest Research Institute and a co-investigator on NASA’s Psyche mission, who was not involved in the current study. “One of the primary goals of the Psyche mission is to study the composition of the asteroid surface using its gamma rays and neutron spectrometer and a color imager. So, the possible presence of compositional heterogeneties is something that the Psyche Science Team is eager to study more.”

This research was supported by the EAPS Crosby Distinguished Postodoctoral Fellowship, and in part by the Heising-Simons Foundation.

How to deflect an asteroid