How to deflect an asteroid 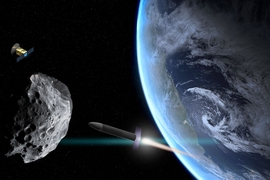 ↓ Download Image
Caption: MIT researchers have devised a framework for deciding which type of mission would be most successful in deflecting an incoming asteroid, taking into account an asteroid’s mass and momentum, its proximity to a gravitational keyhole, and the amount of warning time that scientists have of an impending collision.
Credits: Photo collage: Christine Daniloff, MIT

Caption:
MIT researchers have devised a framework for deciding which type of mission would be most successful in deflecting an incoming asteroid, taking into account an asteroid’s mass and momentum, its proximity to a gravitational keyhole, and the amount of warning time that scientists have of an impending collision.
Credits:
Photo collage: Christine Daniloff, MIT

On April 13, 2029, an icy chunk of space rock, wider than the Eiffel Tower is tall, will streak by Earth at 30 kilometers per second, grazing the planet’s sphere of geostationary satellites. It will be the closest approach by one of the largest asteroids crossing Earth’s orbit in the next decade.

Observations of the asteroid, known as 99942 Apophis, for the Egyptian god of chaos, once suggested that its 2029 flyby would take it through a gravitational keyhole — a location in Earth’s gravity field that would tug the asteroid’s trajectory such that on its next flyby, in the year 2036, it would likely make a devastating impact.

Thankfully, more recent observations have confirmed that the asteroid will sling by Earth without incident in both 2029 and 2036. Nevertheless, most scientists believe it is never too early to consider strategies for deflecting an asteroid if one were ever on a crash course with our home planet.

Now MIT researchers have devised a framework for deciding which type of mission would be most successful in deflecting an incoming asteroid. Their decision method takes into account an asteroid’s mass and momentum, its proximity to a gravitational keyhole, and the amount of warning time that scientists have of an impending collision — all of which have degrees of uncertainty, which the researchers also factor in to identify the most successful mission for a given asteroid.

The researchers applied their method to Apophis, and Bennu, another near-Earth asteroid which is the target of OSIRIS-REx, an operational NASA mission that plans to return a sample of Bennu’s surface material to Earth in 2023. REXIS, an instrument designed and built by students at MIT, is also part of this mission and its task is to characterize the abundance of chemical elements at the surface.

In a paper appearing this month in the journal Acta Astronautica, the researchers use their decision map to lay out the type of mission that would likely have the most success in deflecting Apophis and Bennu, in various scenarios in which the asteroids may be headed toward a gravitational keyhole. They say the method could be used to design the optimal mission configuration and campaign to deflect a potentially hazardous near-Earth asteroid.

“People have mostly considered strategies of last-minute deflection, when the asteroid has already passed through a keyhole and is heading toward a collision with Earth,” says Sung Wook Paek, lead author of the study and a former graduate student in MIT’s Department of Aeronautics and Astronautics. “I’m interested in preventing keyhole passage well before Earth impact. It’s like a preemptive strike, with less mess.”

In 2007, NASA concluded in a report submitted to the U.S. Congress that in the event that an asteroid were headed toward Earth, the most effective way to deflect it would be to launch a nuclear bomb into space. The force of its detonation would blast the asteroid away, though the planet would then have to contend with any nuclear fallout. The use of nuclear weapons to mitigate asteroid impacts remains a controversial issue in the planetary defense community.

The second best option was to send up a “kinetic impactor” — a spacecraft, rocket, or other projectile that, if aimed at just the right direction, with adequate speed, should collide with the asteroid, transfer some fraction of its momentum, and veer it off course.

“The basic physics principle is sort of like playing billiards,” Paek explains.

For any kinetic impactor to be successful, however, de Weck, a professor of aeronautics and astronautics and engineering systems, says the properties of the asteroid, such as its mass, momentum, trajectory, and surface composition must be known “as precisely as possible.” That means that, in designing a deflection mission, scientists and mission managers need to take uncertainty into account.

“Does it matter if the probability of success of a mission is 99.9 percent or only 90 percent? When it comes to deflecting a potential planet-killer, you bet it does,” de Weck says. “Therefore we have to be smarter when we design missions as a function of the level of uncertainty. No one has looked at the problem this way before.”

Paek and his colleagues developed a simulation code to identify the type of asteroid deflection mission that would have the best possibility of success, given an asteroid’s set of uncertain properties.

The researchers fed into the simulation specific variables such as the asteroid’s mass, momentum, and trajectory, as well as the range of uncertainty in each of these variables. Most importantly, they factored in an asteroid’s proximity to a gravitational keyhole, as well as the amount of time scientists have before an asteroid passes through the keyhole.

“A keyhole is like a door — once it’s open, the asteroid will impact Earth soon after, with high probability,” Paek says.

The researchers tested their simulation on Apophis and Bennu, two of only a handful of asteroids for which the locations of their gravitational keyholes with respect to Earth are known. They simulated various distances between each asteroid and their respective keyhole, and also calculated for each distance a “safe harbor” region where an asteroid would have to be deflected so that it would avoid both an impact with Earth and passing through any other nearby keyhole.

They then evaluated which of the three main mission types would be most successful at deflecting the asteroid into a safe harbor, depending on the amount of time scientists have to prepare.

For instance, if Apophis will pass through a keyhole in five years or more, then there is enough time to send two scouts — one to measure the asteroid’s dimensions and the other to nudge it slightly off track as a test — before sending a main impactor. If keyhole passage occurs within two to five years, there may be time to send one scout to measure the asteroid and tune the parameters of a larger projectile before sending the impactor up to divert the asteroid. If Apophis passes through its keyhole within one Earth year or less, Paek says it may be too late.

“Even a main impactor may not be able to reach the asteroid within this timeframe,” Paek says.

Bennu is a similar case, although scientists know a bit more about its material composition, which means that it may not be necessary to send up investigatory scouts before launching a projectile.

With the team’s new simulation tool, Peak plans to estimate the success of other deflection missions in the future.

“Instead of changing the size of a projectile, we may be able to change the number of launches and send up multiple smaller spacecraft to collide with an asteroid, one by one. Or we could launch projectiles from the moon or use defunct satellites as kinetic impactors,” Paek says. “We’ve created a decision map which can help in prototyping a mission.”

This research was supported, in part, by NASA, Draper, and the Samsung Foundation of Culture.

Newsweek reporter Rosie McCall writes that MIT researchers have developed a decision map to help determine the best course of action when faced with an asteroid headed towards Earth. The decision map “considers the asteroid's mass, momentum, trajectory and how much warning time scientists have before collision,” writes McCall.

MIT researchers have developed a new framework aimed at determining the best method to avoid a collision with an Earth-bound asteroid, reports Sophie Lewis for CBS News. “The method developed at MIT could give scientists a handy guide to determine the best course of action before launching a full-scale attack on a potential planet-killer,” Lewis explains.

Inverse reporter Passant Rabie spotlights how a team of MIT researchers have developed three strategies aimed at deflecting asteroids headed for Earth.  “If you have enough time and you want a high probability of success, what you do is you send three missions,” explains Prof. Olivier de Weck.

TechCrunch reporter Darrell Etherington writes that MIT researchers have developed a framework for determining the best course of action to take to deflect an incoming asteroid. The researchers developed a “decision map” that takes into account “the mass and relative momentum of an approaching asteroid, as well as the expected time we have before it enters into a so-called ‘keyhole.’”

Paintballs may deflect an incoming asteroid