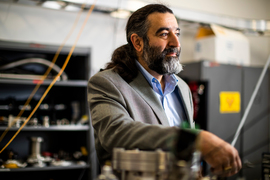 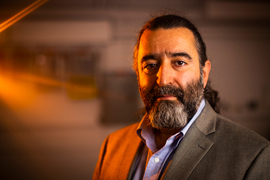 ↓ Download Image
Caption: “Most of my choices in life, when it comes to education, research, work, have been heavily influenced by mentorship,” Danagoulian says.
Credits: Photo: Adam Glanzman

Caption:
“Most of my choices in life, when it comes to education, research, work, have been heavily influenced by mentorship,” Danagoulian says.
Credits:
Photo: Adam Glanzman

Mentorship has played a central role in the twists and turns of Associate Professor Areg Danagoulian’s life.

As a boy, it led him first to mathematics, where a passionate teacher and mentorship from his parents instilled in him a love for the subject. He then followed in the footsteps of his physicist parents and became a physicist himself. During his career, mentorship has helped Danagoulian follow his research interests, from basic to applied nuclear physics and then to industry. More recently, Danagoulian returned to his alma mater, MIT, where he delights in guiding the students in his lab as they become mature scientists.

Joining the Institute’s faculty in 2014 was the latest phase change in a career full of shifting research interests. In that time Danagoulian, who was awarded tenure last year, has developed new technologies for detecting nuclear warhead materials, encrypting their technical details, and verifying their dismantlement.

On the edge of a breakthrough

Danagoulian could not believe his eyes. It was the beginning of 2020, and his lab had just finished running preliminary experiments with collaborators at Princeton University on a new, portable system for detecting fissionable material that could be used in nuclear warheads. The plan had been to gather baseline data and to optimize conditions from there. But as he looked at the early results, he noticed a small but unmistakable blip exactly where one would be if the system were already working.

“The dip was barely visible, but I realized it wasn’t just my eyes,” Danagoulian says. “We had this suboptimal setup and we already had a weak — but real — signal. That really motivated us. We got super excited.”

If the system could work with high enough accuracy, it could transform nuclear disarmament treaties between superpowers. In the past, such treaties have targeted the delivery systems (e.g. missiles and bomber aircraft) of the nuclear weapons rather than the weapons themselves, in part because the technology for verifying nuclear materials was not compact or sensitive enough to be used at nuclear sites. Danagoulian and his collaborators believed they were on the precipice of developing a technology that could change that.

Then the Covid-19 pandemic began. Danagoulian’s lab was temporarily closed, as was the lab at Princeton.

“We’re looking at this plot, and we’re thinking there is a gold mine waiting for us,” Danagoulian says.

After months of analyzing data and planning further experiments, Danagoulian’s lab reopened in June of last year with safety precautions in place.

“We were itching for action. The moment the doors opened, we ran into the lab,” Danagoulian recalls. “We started gathering data — and this time it was really high-quality data due to optimized experimental conditions — and suddenly all these peaks started showing up exactly where they were supposed to. It was this very rewarding thing, this sense of triumph, to do something that had never been done before on such a small scale.”

Since then, Danagoulian has been working with national labs as well as members of the policy community to raise awareness of the technology and learn more about how it could be implemented.

Danagoulian says being at MIT has further exposed him to the field of public policy, helping him build impactful technical solutions and leading to collaborations. He has also developed a related tool for hiding the design details of nuclear warheads during the verification process. That system uses a physics-based analog to common digital encryption methods to scramble data about the weapon’s design. The system addresses another major hurdle to nuclear dismantlement by allowing the international community to inspect a country’s nuclear sites without jeopardizing military secrets.

“Verification of nuclear disarmament is very important, because a treaty without verification is worse than no treaty at all,” Danagoulian says, citing the Comprehensive Test Ban Treaty that was proposed in the 1950s but not fully adopted until 1996, in part because scientists lacked the technology to reliably differentiate underground testing from seismic events.

Amid the multidisciplinary culture of MIT, Danagoulian decided to merge his scientific work with politics. But for his parents, who were both physicists under the Soviet Union (in modern-day Armenia), science and social issues were inseparable.

“In Soviet Armenia, being in a scientist family made you a cultural minority, and it would inevitably become part of your identity,” Danagoulian says. “Here it’s a job, not a social class. But we saw ourselves as a cultural group or a political class. Later, the independence movement in Armenia was largely led by intellectuals and scientists.”

Danagoulian’s family moved to the United States when he was 16. His parents had tough lives as physicists, and while they fostered his love for the sciences, they also encouraged their son to be a computer scientist, which they thought would bring more prosperity and job security. But Danagoulian had discovered a love for physics while preparing for college, and he decided to ignore their pleas. He went on to major in physics at MIT, where he got the chance to work with Professor Richard Milner in the Laboratory of Nuclear Science as part of the Undergraduate Research Opportunities Program (UROP).

Danagoulian completed his PhD work in nuclear physics at the University of Illinois and became a researcher at the Los Alamos National Laboratory.  There, he became increasingly interested in applied science and decided to join a Boston-based company developing a cargo scanner for detecting nuclear materials at ports and border crossings around the world.

At sufficiently high energies, photons can pass through even dense structures like steel shipping containers. While working in industry, Danagoulian was trying to develop a system that would send a beam of photons into containers and scan for the subatomic particles that result from collisions with nuclear materials.

Danagoulian and collaborators developed and commercialized the system, which was deployed in the South Boston Container Terminal for two years before being abandoned during the Covid-19 pandemic, largely because of its high price tag. Danagoulian believes it was the first such system deployed in the world and considers it a major technical success. He believes it could be deployed quickly again if needed in a crisis involving nuclear terrorism.

In 2014, Danagoulian returned to MIT to join the faculty of the Department of Nuclear Science and Engineering.

“This department is very collaborative,” Danagoulian says. “Everyone is trying to help you any way they can. It’s a very supportive department, and I think my success is very much associated with the mentorship and advice I’ve gotten.”

Danagoulian has also embraced his role teaching and advising students, although he admits he had to learn to let students handle the research and experiments themselves.

“When I finally got the discipline to let go, it was very rewarding, because I started seeing my students get better, and I started seeing their work becoming better than my own work in that particular area. That was deeply gratifying,” Danagoulian says.

These days, Danagoulian is happy to be in a position to offer the support and guidance that’s played such a central role in his life.

“Most of my choices in life, when it comes to education, research, work, have been heavily influenced by mentorship,” he says. “Mentorship is critically important for shaping you, helping you pick a direction, and encouraging you. I try to help students understand they are capable of doing great things.”

3 Questions: Areg Danagoulian on a new arms control tool and the future of nuclear security