3 Questions: How the MIT mini cheetah learns to run

CSAIL scientists came up with a learning pipeline for the four-legged robot that learns to run entirely by trial and error in simulation.
Watch Video
Rachel Gordon | MIT CSAIL
Publication Date:
Press Inquiries

It’s been roughly 23 years since one of the first robotic animals trotted on the scene, defying classical notions of our cuddly four-legged friends. Since then, a barrage of the walking, dancing, and door-opening machines have commanded their presence, a sleek mixture of batteries, sensors, metal, and motors. Missing from the list of cardio activities was one both loved and loathed by humans (depending on whom you ask), and which proved slightly trickier for the bots: learning to run.

Researchers from MIT’s Improbable AI Lab, part of the Computer Science and Artificial Intelligence Laboratory (CSAIL) and directed by MIT Assistant Professor Pulkit Agrawal, as well as the Institute of AI and Fundamental Interactions (IAIFI) have been working on fast-paced strides for a robotic mini cheetah — and their model-free reinforcement learning system broke the record for the fastest run recorded. Here, MIT PhD student Gabriel Margolis and IAIFI postdoc Ge Yang discuss just how fast the cheetah can run.

Q: We’ve seen videos of robots running before. Why is running harder than walking?

A: Achieving fast running requires pushing the hardware to its limits, for example by operating near the maximum torque output of motors. In such conditions, the robot dynamics are hard to analytically model. The robot needs to respond quickly to changes in the environment, such as the moment it encounters ice while running on grass. If the robot is walking, it is moving slowly and the presence of snow is not typically an issue. Imagine if you were walking slowly, but carefully: you can traverse almost any terrain. Today’s robots face an analogous problem. The problem is that moving on all terrains as if you were walking on ice is very inefficient, but is common among today’s robots. Humans run fast on grass and slow down on ice — we adapt. Giving robots a similar capability to adapt requires quick identification of terrain changes and quickly adapting to prevent the robot from falling over. In summary, because it’s impractical to build analytical (human-designed) models of all possible terrains in advance, and the robot's dynamics become more complex at high-velocities, high-speed running is more challenging than walking. 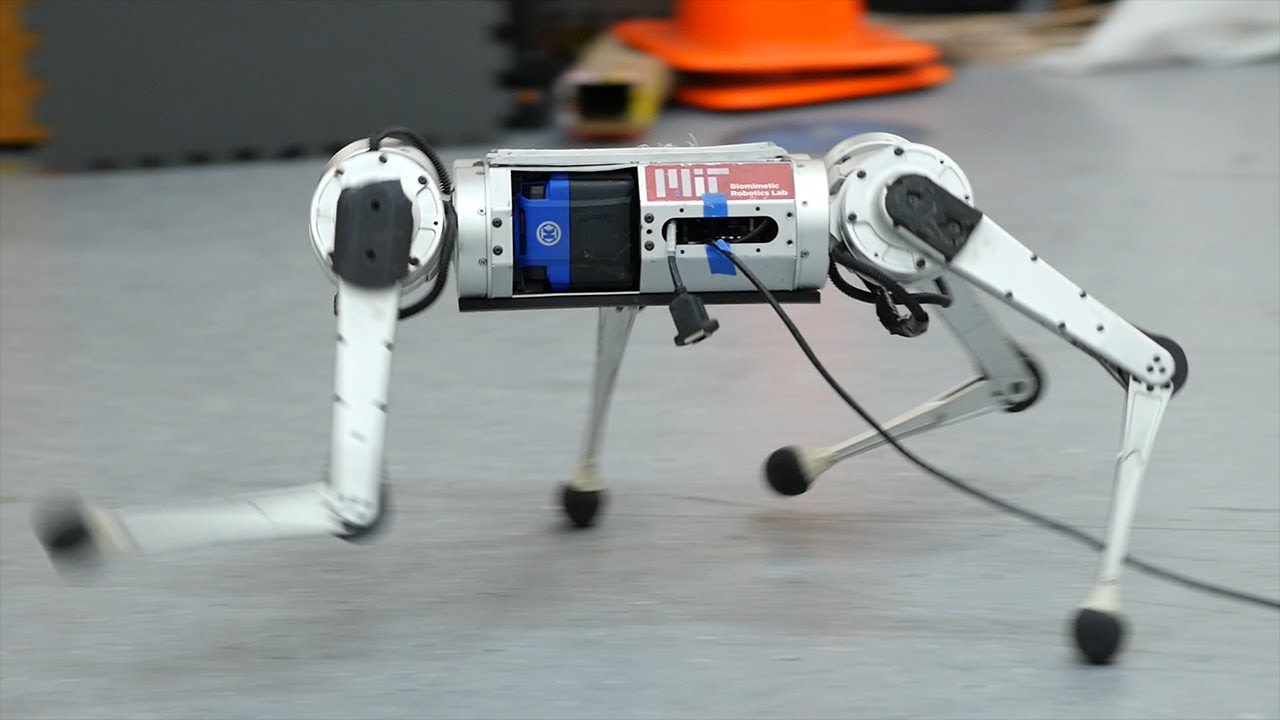 Play video
The MIT mini cheetah learns to run faster than ever, using a learning pipeline that’s entirely trial and error in simulation.

Q: Previous agile running controllers for the MIT Cheetah 3 and mini cheetah, as well as for Boston Dynamics’ robots, are “analytically designed,” relying on human engineers to analyze the physics of locomotion, formulate efficient abstractions, and implement a specialized hierarchy of controllers to make the robot balance and run. You use a “learn-by-experience model” for running instead of programming it. Why?

A: Programming how a robot should act in every possible situation is simply very hard. The process is tedious, because if a robot were to fail on a particular terrain, a human engineer would need to identify the cause of failure and manually adapt the robot controller, and this process can require substantial human time. Learning by trial and error removes the need for a human to specify precisely how the robot should behave in every situation. This would work if: (1) the robot can experience an extremely wide range of terrains; and (2) the robot can automatically improve its behavior with experience.

Thanks to modern simulation tools, our robot can accumulate 100 days’ worth of experience on diverse terrains in just three hours of actual time. We developed an approach by which the robot’s behavior improves from simulated experience, and our approach critically also enables successful deployment of those learned behaviors in the real world. The intuition behind why the robot’s running skills work well in the real world is: Of all the environments it sees in this simulator, some will teach the robot skills that are useful in the real world. When operating in the real world, our controller identifies and executes the relevant skills in real-time.

Q: Can this approach be scaled beyond the mini cheetah? What excites you about its future applications?

A: At the heart of artificial intelligence research is the trade-off between what the human needs to build in (nature) and what the machine can learn on its own (nurture). The traditional paradigm in robotics is that humans tell the robot both what task to do and how to do it. The problem is that such a framework is not scalable, because it would take immense human engineering effort to manually program a robot with the skills to operate in many diverse environments. A more practical way to build a robot with many diverse skills is to tell the robot what to do and let it figure out the how. Our system is an example of this. In our lab, we’ve begun to apply this paradigm to other robotic systems, including hands that can pick up and manipulate many different objects.

NBC 1st Look host Chelsea Cabarcas visits MIT to learn more about how faculty, researchers and students are “pioneering the world of tomorrow.” Cabarcas meets the MIT Solar Electric Vehicle team and gets a peek at Nimbus, the single-occupant vehicle that team members raced in the American Solar Challenge from Kansas City to New Mexico. Cabarcas also sees the back-flipping MIT mini cheetah that could one day be used in disaster-relief operations.

MIT’s mini cheetah robot was taught how to goal keep using simulation, reports Emmett Smith for Mashable. “The robot was able to block 87.5 percent of the shots taken, which is just slightly above the best professional goalies in the English Premiere League,” writes Smith.

In a new paper, MIT researchers detail the use of reinforcement learning to teach MIT’s mini cheetah robot to play goalie in a soccer match, reports Brian Heater for TechCrunch. “In this work, we focused solely on the goalkeeping task, but the proposed framework can be extended to other scenarios, such as multi-skill soccer ball kicking,” the researchers explain.

The MIT mini cheetah broke a speed record after learning to adapt to difficult terrain and upping its speed, reports Rienk De Beer for Popular Mechanics.

MIT researchers have developed a new system that enabled the mini robotic cheetah to learn to run, reports John Koetsier for Forbes. ““Traditionally, the process that people have been using [to train robots] requires you to study the actual system and manually design models,” explains Prof. Pulkit Agrawal. “This process is good, it’s well established, but it’s not very scalable. “But we are removing the human from designing the specific behaviors.”

MIT researchers have utilized a new reinforcement learning technique to successfully train their mini cheetah robot into hitting its fastest speed ever, reports Matt Simon for Wired. “Rather than a human prescribing exactly how the robot should walk, the robot learns from a simulator and experience to essentially achieve the ability to run both forward and backward, and turn – very, very quickly,” says PhD student Gabriel Margolis.

MIT researchers have created a new computer algorithm that has allowed the mini cheetah to maximize its speed across varying types of terrain, reports Shi En Kim for Popular Science. “What we are interested in is, given the robotic hardware, how fast can [a robot] go?” says Prof. Pulkit Agrawal. “We didn’t want to constrain the robot in arbitrary ways.”

CSAIL researchers developed a new machine learning system to teach the MIT mini cheetah to run, reports James Vincent for The Verge. “Using reinforcement learning, they were able to achieve a new top-speed for the robot of 3.9m/s, or roughly 8.7mph,” writes Vincent.

MIT researchers have used a new reinforcement learning system to teach robots how to acclimate to complex landscapes at high speeds, reports Emmett Smith for Mashable. “After hours of simulation training, MIT’s mini-cheetah robot broke a record with its fastest run yet,” writes Smith.

Gizmodo reporter Andrew Liszewski writes that CSAIL researchers developed a new AI system to teach the MIT mini cheetah how to adapt its gait, allowing it to learn to run. Using AI and simulations, “in just three hours’ time, the robot experienced 100 days worth of virtual adventures over a diverse variety of terrains,” writes Liszewski, “and learned countless new techniques for modifying its gait so that it can still effectively loco-mote from point A to point B no matter what might be underfoot.”