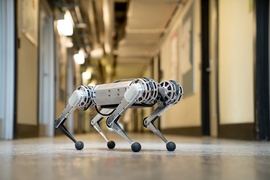 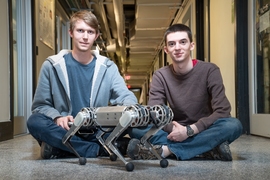 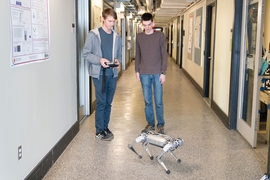 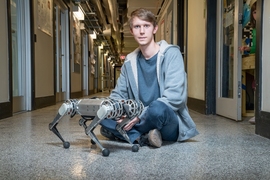 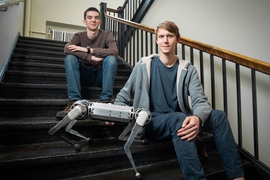 MIT’s new mini cheetah robot is springy and light on its feet, with a range of motion that rivals a champion gymnast. The four-legged powerpack can bend and swing its legs wide, enabling it to walk either right-side up or upside down. The robot can also trot over uneven terrain about twice as fast as an average person’s walking speed.

Weighing in at just 20 pounds — lighter than some Thanksgiving turkeys — the limber quadruped is no pushover: When kicked to the ground, the robot can quickly right itself with a swift, kung-fu-like swing of its elbows.

Perhaps most impressive is its ability to perform a 360-degree backflip from a standing position. Researchers claim the mini cheetah is designed to be “virtually indestructible,” recovering with little damage, even if a backflip ends in a spill. 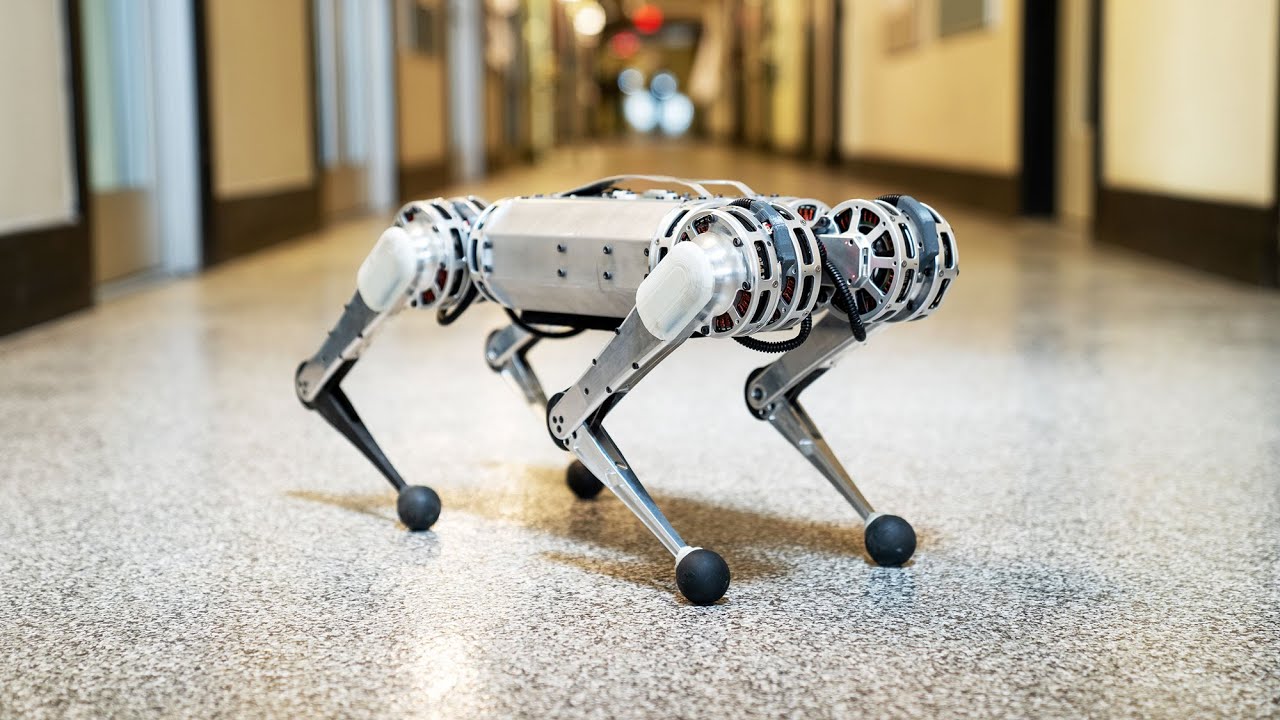 Play video
MIT's new mini cheetah robot is the first four-legged robot to do a backflip. At only 20 pounds, the limber quadruped can bend and swing its legs wide, enabling it to walk either right side up or upside down. The robot can also trot over uneven terrain about twice as fast as an average person's walking speed.

In the event that a limb or motor does break, the mini cheetah is designed with modularity in mind: Each of the robot’s legs is powered by three identical, low-cost electric motors that the researchers engineered using off-the-shelf parts. Each motor can easily be swapped out for a new one.

“You could put these parts together, almost like Legos,” says lead developer Benjamin Katz, a technical associate in MIT’s Department of Mechanical Engineering.

The researchers will present the mini cheetah’s design at the International Conference on Robotics and Automation, in May. They are currently building more of the four-legged machines, aiming for a set of 10, each of which they hope to loan out to other labs.

“A big part of why we built this robot is that it makes it so easy to experiment and just try crazy things, because the robot is super robust and doesn’t break easily, and if it does break, it’s easy and not very expensive to fix,” says Katz, who worked on the robot in the lab of Sangbae Kim, associate professor of mechanical engineering.

Kim says loaning mini cheetahs out to other research groups gives engineers an opportunity to test out novel algorithms and maneuvers on a highly dynamic robot, that they might not otherwise have access to.

“Eventually, I’m hoping we could have a robotic dog race through an obstacle course, where each team controls a mini cheetah with different algorithms, and we can see which strategy is more effective,” Kim says. “That’s how you accelerate research.”

The mini cheetah is more than just a miniature version of its predecessor, Cheetah 3, a large, heavy, formidable robot, which often needs to be stabilized with tethers to protect its expensive, custom-designed parts.

“In Cheetah 3, everything is super integrated, so if you want to change something, you have to do a ton of redesign,” Katz says. “Whereas with the mini cheetah, if you wanted to add another arm, you could just add three or four more of these modular motors.”

Katz came up with the electric motor design by reconfiguring the parts to small, commercially available motors normally used in drones and remote-controlled airplanes.

Each of the robot’s 12 motors is about the size of a Mason jar lid, and consists of: a stator, or set of coils, that generates a rotating magnetic field; a small controller that conveys the amount of current the stator should produce; a rotor, lined with magnets, that rotates with the stator’s field, producing torque to lift or rotate a limb; a gearbox that provides a 6:1 gear reduction, enabling the rotor to provide six times the torque that it normally would; and a position sensor that measures the angle and orientation of the motor and associated limb.

Each leg is powered by three motors, to give it three degrees of freedom and a huge range of motion. The lightweight, high-torque, low-inertia design enables the robot to execute fast, dynamic maneuvers and make high-force impacts on the ground without breaking gearboxes or limbs.

“The rate at which it can change forces on the ground is really fast,” Katz says. “When it’s running, its feet are only on the ground for something like 150 milliseconds at a time, during which a computer tells it to increase the force on the foot, then change it to balance, and then decrease that force really fast to lift up. So it can do really dynamic stuff, like jump in the air with every step, or run with two feet on the ground at a time. Most robots aren’t capable of doing this, so move much slower.”

The engineers ran the mini cheetah through a number of maneuvers, first testing its running ability through the hallways of MIT’s Pappalardo Lab and along the slightly uneven ground of Killian Court.

In both environments, the quadruped bound along at about 5 miles per hour. The robot’s joints are capable of spinning three times faster, with twice the amount of torque, and Katz estimates the robot could run about twice as fast with a little tuning.

The team wrote another computer code to direct the robot to stretch and twist in various, yoga-like configurations, showcasting its range of motion and ability to rotate its limbs and joints while maintaining balance. They also programmed the robot to recover from an unexpected force, such as a kick to the side. When the researchers kicked the robot to the ground, it automatically shut down.

“It assumes something terrible has gone wrong, so it just turns off, and all the legs fly wherever they go,” Katz says.

When it receives a signal to restart, the robot first determines its orientation, then performs a preprogrammed crouch or elbow-swing maneuver to right itself on all fours.

Katz and co-author Jared Di Carlo, an undergraduate in the Department of Electrical Engineering and Computer Science (EECS), wondered whether the robot could take on even higher-impact maneuvers. Inspired by a class they took last year, taught by EECS Professor Russ Tedrake, they set about programming the mini cheetah to perform a backflip.

“We thought it would be a good test of robot performance, because it takes a lot of power, torque, and there are huge impacts at the end of a flip,” Katz says.

The team wrote a “giant, nonlinear, offline trajectory optimizations” that incorporated the robot’s dynamics and actuator capabilities, and specified a trajectory in which the robot would start out in a certain, right-side-up orientation, and end up flipped 360 degrees. The program they developed then solved all the torques that needed to be applied to each joint, from each individual motor, and at every time period between start and end, in order to carry out the backflip.

“The first time we tried it, it miraculously worked,” Katz says.

“This is super exciting,” Kim adds. “Imagine Cheetah 3 doing a backflip — it would crash and probably destroy the treadmill. We could do this with the mini cheetah on a desktop.”

The team is building about 10 more mini cheetahs, each of which they plan to loan out to collaborating groups, and Kim intends to form a mini cheetah research consortium of engineers, who can invent, swap, and even compete with new ideas.

Meanwhile, the MIT team is developing another, even higher-impact maneuver.

“We’re working now on a landing controller, the idea being that I want to be able to pick up the robot and toss it, and just have it land on its feet,” Katz says. “Say you wanted to throw the robot into the window of a building and have it go explore inside the building. You could do that.”

CNN’s Bronte Lord spotlights the robotic mini cheetahs developed by Prof. Sangbae Kim’s research group that can run untethered, perform backflips and kick a soccer ball. Kim explains that his ultimate goal is to "achieve the same level of mobility as animals... as good as a dog following you around."

In this video, HuffPost highlights a robotic cheetah created by MIT researchers that can perform a backflip from a standing position. HuffPost notes that the robot has a “range of motions, making it agile enough to pick itself up if knocked to the ground.”

Verge reporter Chaim Gartenberg writes that MIT researchers have developed a new mini cheetah robot that can perform backflips. Gartenberg notes that the robot is the first four-legged robot that can do a backflip, adding that it weighs “around 20 pounds, and can trot along at up to 2.45 meters per second (around 5.5 miles per hour).”

Fortune reporter Alyssa Newcomb writes that MIT researchers have developed a 20-pound robotic cheetah that can successfully execute a backflip and nail the landing. “The robotic mini cheetah can also gallop over uneven terrain twice as fast as the average human,” writes Newcomb.

Forbes reporter Eric Mack writes about the latest iteration of MIT’s robotic cheetah: A new miniature version that weighs 20 pounds. “The cheetah has heavyweight skills like walking over uneven terrain, picking itself up after a fall or a swift kick and of course, its ability to pull off a 360-degree reverse flip from a standing position,” Mack explains.

MIT researchers have developed a miniature robotic cheetah that can perform a wide range of maneuvers, reports Brian Heater for TechCrunch. “The robot is capable of running up to five miles per hour, can perform a 360-degree backflip from a standing position and will right itself quickly after being kicked to the ground,” Heater explains.

Washington Post reporter Peter Holley writes that MIT researchers have created a mini robotic cheetah that can perform a backflip and walk right-side up or upside down. “Legged robots will have a variety of uses where human or animal-like mobility is necessary, but it may be unsafe to send a person,” explains technical associate Benjamin Katz.

A miniature version of the robotic cheetah developed by MIT researchers provides a testbed for researchers to experiment with new maneuvers like backflips, reports David Freeman for NBC Mach. “Having a platform that's relatively small and safe and cheap makes running experiments very easy,” says technical associate Benjamin Katz, “you don't have to worry about breaking the robot or getting hurt.”