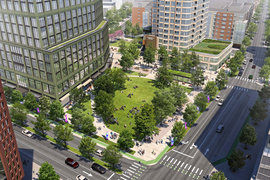 ↓ Download Image
Caption: Third Street Park: the 2-acre park at the corner of Broadway and Third Street, with a view into the center of the development.
Credits: Credit: Design Distill 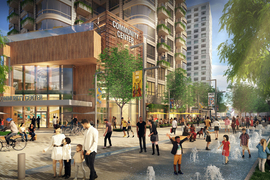 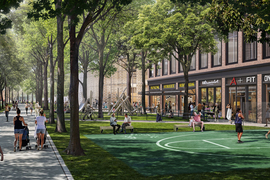 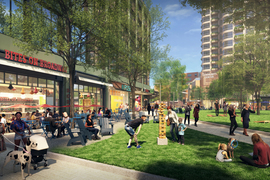 Caption:
Third Street Park: the 2-acre park at the corner of Broadway and Third Street, with a view into the center of the development.
Credits:
Credit: Design Distill

Caption:
Community Center: the facility that will provide cultural, educational, and recreational activities for the public.
Credits:
Credit: Interface

Ten years into a comprehensive process to reimagine the 14-acre Volpe parcel in Kendall Square, MIT has a Cambridge-approved master plan and is preparing to advance specific design proposals for the mixed-use development. Getting to this point required extensive public review, which led to city approvals for a rezoning of the site and special permits that will govern the “look and feel” of the eight-building development.

In addition to the design process, a final step in the creation of this vibrant district will be the Institute’s completion of the new federal facility to house the Volpe National Transportation Systems Center headquarters on four acres of the site. Once the new complex is turned over to the federal government in 2023, MIT will begin development on the remaining 10 acres of the parcel, in accordance with the Institute’s agreement with the U.S General Services Administration.

“We’re thrilled to reach this milestone moment in the course of the Volpe project,” says Glen Shor, MIT’s executive vice president and treasurer. “We’re also very grateful to our city colleagues and the Cambridge community for their steady collaboration and critical feedback during the proposal process. This revitalized parcel will serve as an important addition to the local innovation ecosystem by increasing the city’s housing stock and offering extensive benefits to all who live and work in Cambridge.”

MIT’s master plan will transform the Volpe parcel into a dynamic residential, recreational, and commercial center including:

Michael Owu, managing director of MIT’s real estate group, is the project executive for the Volpe redevelopment. “The final mix of uses will serve employees, students, city residents, and visitors alike,” he says. “There will be something for everyone and dozens of reasons for people to want to come to the site. The retail, entertainment, and cultural offerings alone will be a very strong draw.”

The project will include cutting-edge sustainability and resiliency practices. For example, MIT has committed to:

The most recent project presentation can be found on the Volpe project website.

Benefits for the broader community

As part of the process to secure the needed development rights for the project, MIT agreed with the city to provide the following meaningful community-wide benefits:

In addition, the project will contribute approximately $23 million annually in real estate taxes on property that is currently tax-exempt.

Equity and inclusion at the core of the project

A central feature of the project’s planning process was how to make the development as equitable and inclusive as it can possibly be. This desire resulted in a series of seven workshops focused on the community center, retail, employment, youth, collaboration with nonprofits, open space, and housing.

Five hundred members of the Cambridge community contributed to the multiple conversations and helped to create an overarching framework for equity and inclusion. Nearly every element of the Volpe plan was touched by this process and the results are manifested in open space details, operational and logistical practices, and the retail development planning process.

“We wanted to understand what would truly create equity and inclusion,” says Sarah Gallop, MIT’s co-director of government and community relations. “We focused on how the housing can be operated in an inclusive manner, what kinds of retail and active uses will celebrate Cambridge’s diverse community, how the Job Connector by MIT can help residents with employment, and what kinds of open space programming will maximize inclusiveness and participation. We’re indebted to all who participated in this critical effort.”