The Cambridge-area innovation hub has been buffeted by the events of the past year but also shown great resilience and creativity, speakers said.
Zach Winn | MIT News Office
Publication Date:
Press Inquiries 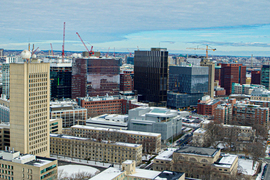 No community has been immune to the hardships of the last year. But there have been bright spots. In response to the global pandemic, scientists developed effective vaccines. In response to tragic killings, people have begun important conversations about racial injustice and equity. In response to social isolation, we’ve adopted new digital platforms and community-building initiatives.

In many ways, Kendall Square has been a microcosm for those responses. The community has leaned into issues around inclusion, striven to support struggling businesses, and developed programs to overcome the loneliness and anxiety that have followed sudden changes in life and work. Of course, Kendall Square has also been home to some of the vaccine development work critical for ending the global pandemic.

Those efforts gave the 13th annual meeting of the Kendall Square Association (KSA) a decidedly positive tone. This year’s event was titled “The New Kendall Challenge” in a nod to the transformed landscape for work and life we find ourselves in. Even as speakers acknowledged the tragedies of the last 12 months and the tough work ahead, they also saw signs of positive change.

Chief among the optimists was MIT president and keynote speaker L. Rafael Reif.

“I think it is safe to say that, when we all come back to Kendall, things will be different,” Reif said in his address. “But I have no doubt that Kendall will come back better than ever.”

Reif also expressed gratitude that companies with such a large a presence in Kendall Square, including Moderna, Pfizer, and Johnson and Johnson, were playing such a central role in vaccine efforts.

“To the general public, the vaccines seemed to come out of nowhere — an overnight success,” Reif said. “But of course, the ‘miracle’ of these vaccines was the fruit of about four decades of fundamental university science and applied industry research.”

Another speaker striking a positive tone was KSA President C.A. Webb. Webb said that while the KSA has been around for 14 years, the past 12 months has made the association rethink its role in the community.

“The KSA community has always been critical, but nothing like a global pandemic to take it from a nice-to-have to a must-have,” Webb said.

In the first few weeks of the pandemic, KSA brought together different segments of its community for discussion, including restaurant owners, human resources leaders, and facility operators. They quickly learned that everyone was grappling with similar problems.

In response to the value members were getting from those meetings, KSA launched the “Future of (how we) Work” task force to help answer questions about how the ecosystem will return to work after Covid-19.

Reif noted KSA’s task force is just one of several initiatives that show the alignment between KSA and MIT. Another is KSA’s Inclusion Drives Innovation program, which complements MIT’s Strategic Action Plan for Diversity, Equity, and Inclusion.

Sullivan first entered the life sciences industry 25 years ago with Johnson and Johnson. In that time, she said, she’s been inspired in her NAACP work by her biotech colleagues, who are tackling some of life’s most complex and persistent challenges.

Sullivan said the conversations around racial injustice in the last year have been hugely important for the country.

“We are making progress,” Sullivan said. “In many respects, the tragedies of the last year heightened our collective awareness about race and racism in our country. In the last year, we haven’t been afraid to ask the question, ‘Why?’ Why are we here? Why is this happening? That has led to a deeper understanding of racial inequality in our country and it’s led to more of a commitment on the part of some to do something meaningful about it.”

Sullivan and Sibold also acknowledged the country is still struggling to decide how to address issues like police accountability, educational equity, and voting access.

“Anything we did in the last year wasn’t good enough, and now we’re in a new trajectory that we all have to move in,” Sibold said.

Other speakers at the virtual event included Cambridge Mayor Sumbul Siddiqui, who thanked the Kendall community for raising money to provide bulk regional testing and Covid-19 vaccine trials, and Broad Institute Chief Communications Officer and KSA board chair Lee McGuire, who described a collaboration involving Cambridge-based groups to provide door-to-door Covid testing at every Cambridge nursing home in one weekend.

Overall, the event’s speakers believe Kendall Square’s community will help drive each of its members’ success moving forward. They also said the community is just getting started.

During a Q&A session with Reif after his keynote, Webb asked what inning he thought Kendall Square was in. Reif said the third.

The answer underscored the fact that there’s a lot of work to do and progress to be made in the area. It also alluded to the continued potential of what has been called the most innovative square mile on the planet.

“I would like Kendall Square to be a place that never forgets the source of its strength: a great system of mutual inspiration, support, and collaboration, stretching from fundamental science all the way to practical impact — a system that embraces absolutely everyone in this room today,” Reif said.