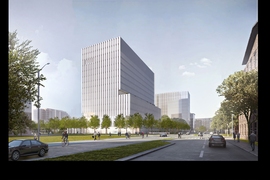 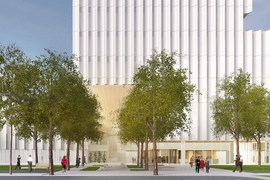 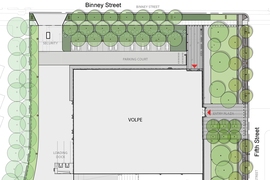 ↓ Download Image
Caption: The new U.S. DOT Volpe building will be located in the middle of a four-acre parcel at the northwest corner of the 14-acre Volpe site adjacent to Binney Street and Loughrey Way. The landscape plan includes over 100 new diverse native species trees.
Credits: Image courtesy of Reed Hilderbrand Landscape Architects 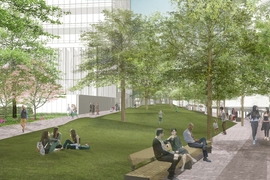 ↓ Download Image
Caption: A rendering of a section of the new open space showing a landscape-integrated art piece designed by artist Maya Lin in coordination with architecture firm Reed Hilderbrand. The design is a representation of the Doppler Effect, manifested in undulating grassy mounds that depict sound waves.
Credits: Image courtesy of Maya Lin Studio and Reed Hilderbrand Landscape Architects

Caption:
The new U.S. DOT Volpe building will be located in the middle of a four-acre parcel at the northwest corner of the 14-acre Volpe site adjacent to Binney Street and Loughrey Way. The landscape plan includes over 100 new diverse native species trees.
Credits:
Image courtesy of Reed Hilderbrand Landscape Architects

Caption:
A rendering of a section of the new open space showing a landscape-integrated art piece designed by artist Maya Lin in coordination with architecture firm Reed Hilderbrand. The design is a representation of the Doppler Effect, manifested in undulating grassy mounds that depict sound waves.
Credits:
Image courtesy of Maya Lin Studio and Reed Hilderbrand Landscape Architects

Since the Cambridge City Council approved MIT’s rezoning petition for the 14-acre U.S. Department of Transportation (DOT) Volpe site in October 2017, a team of architects and landscape planners has been working to imagine a new home for the John A. Volpe National Transportation Systems Center in Kendall Square.

As part of its January 2017 agreement with the federal government, MIT will build a new headquarters for the U.S. DOT Volpe Center on approximately four acres. The building site is located in the northwest corner of the parcel, next to Binney Street and Loughrey Walkway, which runs between Broadway and Binney Street. The new facility will consolidate operations that are currently carried out in six different buildings on the site.

The federal government, working through the General Services Administration (GSA), and MIT engaged architectural firm Skidmore, Owings and Merrill to design the new building, which is slated to meet the Leadership in Energy and Environmental Design (LEED) Gold level. The design includes robust sustainability and resiliency features, including solar panels on the roof that will supply at least 30 percent of the building’s hot water demand, and high-efficiency heating, ventilation, and cooling equipment. The team designed the building’s massing, glazing, and interior layouts to maximize daylight into the building, and designed fins on the exterior façades to minimize heating and cooling loads. In addition, the site will incorporate best practices in storm water management.

Although the project is not subject to local review, the design of the new 212-foot-tall center was subject to the federal government’s rigorous review process as part of the GSA Design Excellence Program. This process also considered design guidelines recommended by the City of Cambridge, included peer reviews, and ultimately was approved by the GSA’s regional chief architect and the chief architect of the U.S.

MIT Managing Director of Real Estate Steve Marsh says: “This is a very complex project that is being executed on behalf of the United States government. The collaboration with the federal government has gone very well, and we are pleased with the outcome of the building and landscape design processes. I believe that the new U.S. DOT Volpe Center will be a welcome and vibrant addition to the broader Kendall Square community.”

Inviting and engaging public spaces, including seating areas and walkways, will surround the federal headquarters. A primary goal of the public space is to bring the East Cambridge neighborhood and Kendall Square community together through a new north-south connection. The development of this currently inaccessible site, which comprises predominantly asphalt surface parking, will promote access to and from the residential neighborhood, the Charles River, the MBTA, and the many retail and restaurant offerings in Kendall Square.

In order to achieve this sense of openness and connectivity, the GSA and MIT engaged artist Maya Lin, known for her large-scale, site-specific outdoor earthworks, in coordination with landscape architecture firm Reed Hilderbrand, to create an engaging and inviting public landscape. Central to the open space will be Lin’s landscape-integrated art piece — a physical and visual representation of the Doppler effect, manifested in undulating grassy mounds that depict sound waves.

The incorporation of a Maya Lin art piece within the site is part of the Federal government’s Art in Architecture program which commissions artworks for new buildings nationwide.

Since the outset of the project, the GSA has been focused on constructing a headquarters that is inviting and reflects the context of the site’s surroundings. GSA Regional Commissioner of the Public Buildings Service Glenn Rotondo says: “We are committed to creating a public realm that is well-integrated within the community.”

Once completed, the new U.S. DOT Volpe development will include primarily below-grade vehicular parking and ample bicycle parking. In addition, over 100 new diverse native-species trees will be installed using current best practices in planting, and an extensive landscaping program will be available for the public to enjoy. Even though the federal government is exempt from Cambridge’s local tree ordinance, the tree replacement plan is designed to materially exceed the current local requirements for large projects. To prepare the site for construction, 21 private trees will be removed that are within the building’s footprint or security perimeter. Twenty of those trees are Norway Maples, an invasive species that Massachusetts prohibits from being sold, planted, or propagated. In addition, two street trees will need to be relocated or replaced to accommodate a curb cut required by the project.

Enabling utility work on the Federal site is ongoing, and construction of the garage and building is expected to start later this year and take approximately three years. Once the new John A. Volpe National Transportation Systems Center is up and running, the Institute will be able to commence redevelopment of the remaining 10 acres of the original U.S. DOT Volpe parcel. MIT’s proposal for that portion of the site, which was presented to the community during the rezoning process, features housing (including 280 affordable units), commercial and lab space, retail, open space, a community center, and a job connector.

MIT is currently advancing other commitments that were codified as part of the Volpe rezoning agreement. The Institute has already provided $500,000 toward the design of the Grand Junction multiuse community path, which will be followed by an additional $8 million contribution for continuing design and construction. MIT staff are currently working closely with the city and other stakeholders to implement this critical infrastructure project. In addition, the Institute is in the process of identifying a site for a new 500-bed graduate student residence hall — a commitment made to the City of Cambridge through the Volpe zoning process.

The U.S. DOT Volpe building and landscape design is being shared with the Cambridge Planning Board tonight at the board’s annual Town Gown public meeting.