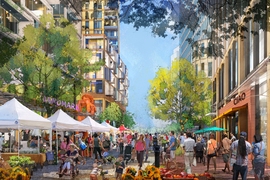 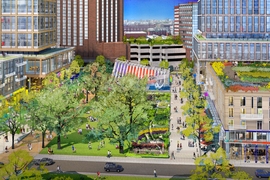 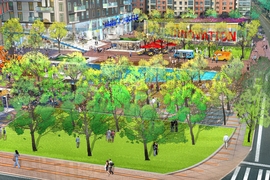 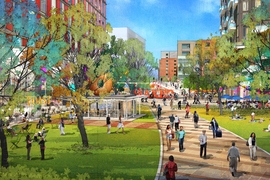 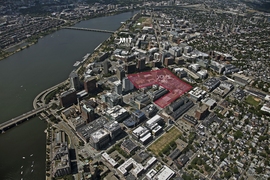 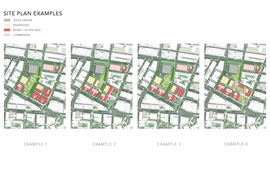 Caption:
A lively streetscape extending Broad Canal Way into the Volpe site, with active uses and retail leading pedestrians and bicyclists into the open space.

Caption:
The central open space connects 5th Street to Kendall Square and provides opportunities for recreation, outdoor dining, gardens, and a pavilion for innovation and entertainment.

Caption:
A large plaza at the corner of 3rd Street and Broadway provides green space, a water feature representing an extension of the Broad Canal, retail kiosks, and a multipurpose innovation facility.

Caption:
The team has identified four potential site plans that would work under the proposed zoning showing different locations for the open space and buildings.

Since January, when MIT and the U.S. General Services Administration (GSA) finalized an agreement for the redevelopment of the Volpe parcel in Kendall Square, an active effort has been underway to collect input about the future of the 14-acre site. Now, after five months of meetings and the consideration of feedback from two key working groups (one MIT-based, and one Cambridge-based), the Institute has officially filed a mixed-use rezoning petition for the parcel, which is located near MIT’s campus.

The proposal builds on several years of community-wide discussion and analysis, and includes a variety of components — including housing, retail, open space, community space, and commercial and lab space — that will serve to create a new, vibrant hub of activity on the last undeveloped parcel in Kendall Square.

“We’ve been guided by President Reif’s vision that re-imagining the Volpe parcel is a critical step in advancing the Kendall Square innovation ecosystem,” says Executive Vice President and Treasurer Israel Ruiz. MIT President L. Rafael Reif’s January message to the MIT community about the potential of the Volpe site described the synergistic relationship between MIT and Kendall Square: “Our future success depends on making sure that Kendall succeeds as a place — a place where people want to live, work, and play, and a place that makes our city stronger too.”

In his cover letter to the Cambridge City Council, Ruiz described the proposed redevelopment as “a unique and transformational opportunity for our entire community.” In addition to the principal mixed-use elements of the plan, the zoning petition contains provisions that address specific Cambridge, MIT, and Kendall Square needs.

The rezoning submittal also includes several different site plan examples, all of which could be accommodated within the proposed zoning. The examples show variations on the placement and configuration of the open space, as well as the commercial and residential buildings.

“Working with the GSA has been very productive, and I’ve been pleased to see the community-oriented focus of the Volpe officials,” says Steve Marsh, managing director of real estate in MIT’s Investment Management Company (MITIMCo). “The John A. Volpe National Transportation Systems Center is an incredibly important research organization, and I know that all of us in Cambridge are grateful that the Center has decided to re-invigorate its presence in Kendall Square.”

A critical element of the MIT-GSA agreement is the stipulation that a new Volpe headquarters be designed and constructed first, before the remainder of the parcel is developed. Since the federal government is exempt from local zoning regulations, that effort is underway. Volpe officials and MIT staff are working with architectural firm Skidmore, Owings, and Merrill to design the new building.

“We think it’s critical to advance MIT’s zoning petition now, so it can be considered at the same time that we’re designing the Volpe Center and its environs. In that manner, we can ensure maximum synergies between the new Volpe building’s presence, and the look and feel of the buildings and open space on the rest of the site,” Marsh says. “In fact, MIT and the federal government have hired the same landscape architect — Reed-Hilderbrand — in an effort to optimize the seamlessness of the entire development.”

Ruiz and Provost Martin Schmidt established a MIT Volpe working group in January 2017 to advise to the team developing the Institute’s plan for the Volpe site. The group was asked by the provost to provide an academic perspective to the planning process, helping to identify opportunities to create a vibrant development that complements and strengthens the Kendall Square innovation ecosystem.

Steven Hall, professor of aeronautics and astronautics, who served as chair of the group, reported preliminary findings of the effort to Schmidt, senior officers, and MIT’s deans. “We solicited input from faculty, staff, and students, and we were gratified to hear from nearly 100 people about the future of the Volpe site,” Hall says. “Our group, which included faculty and students, examined multiple aspects of the proposed redevelopment and determined what issues are important to our community and the Institute based on what we learned and the input that we received.”

Hall reported that the MIT working group’s findings, which should be issued formally by the end of June, address topics related to housing affordability and diversity, amenities and vital living space, transportation and infrastructure, open space, and continued engagement with the MIT community — including around plans for graduate student housing, broader integration of campus planning efforts, sustainability, and architecture.

“I’m thankful to Steve Hall and the entire MIT Volpe working group for taking on this important responsibility,” Schmidt says. “The areas of focus that the group has identified are vital to the success of the Volpe development and MIT’s future, and they will be integral to the process ahead.”

Schmidt adds, “The Working Group also highlighted topics which it believes warrant continued attention through our campus planning processes — most notably the need to add to our graduate housing stock. The new graduate residence hall in Kendall Square, which is underway, will help, but we need to continue to increase our capacity as recommended by the 2014 Graduate Student Housing Working Group report prepared by Professor Philip Clay.”

Meanwhile, before his retirement, former Cambridge City Manager Richard Rossi established a Cambridge Volpe working group of residents, business representatives, city staff and officials, and MIT representatives (once the Institute was designated as the developer) to examine the potential development of the Volpe site. That group was asked to prepare an urban design framework and planning principles, and has been working steadily since October 2016, building on several years of study carried out by city staff and the Cambridge Planning Board. A draft set of Planning and Design Principles has been developed as a result of the group’s examination, which will serve to steer the zoning discussions.

MIT began seeking input on the potential redevelopment of the Volpe parcel soon after the agreement with the federal government was finalized. The process of collecting feedback kicked off with two community-wide meetings in February which attracted approximately 200 MIT and Cambridge individuals. After that, MIT staff participated in more than 50 meetings with elected officials, neighborhood groups, civic associations, residents, city planning staff, and the MIT and the Cambridge Volpe working groups.

“Every time we meet with people, whether it’s in the setting of a large public meeting, or a conversation with a few residents, we learn something important,” says Co-Director of Government and Community Relations Sarah Gallop. “The perspective of each person or group is valid and must be considered. In the end, we’ll need to collectively evaluate the decisions before us, particularly those related to retail, open space, and the nature of the proposed community space. For now, we’re grateful to all who have contributed their ideas and observations, and look forward to the continued dialogue during the public hearing process.”

Once the rezoning petition is referred by the City Council to the state-mandated public process, hearings will be scheduled with the City Council’s Ordinance Committee and the Planning Board to review the Institute’s proposal.

The Institute is hosting a community-wide Volpe workshop on Thursday, June 29, at the Boston Marriott Cambridge from 5:30 to 7:30 pm. All are welcome. This activity-based interactive program will focus on the three primary topics that have arisen from the community dialogue to-date: retail, open space, and the proposal to establish community space.

More background and information about the Volpe project, including several presentations, can be found here: https://volpe.mit.edu/

Questions, feedback, and ideas about the Volpe redevelopment may be sent to the Volpe team at: volpemit@mit.edu

Writing for The Boston Globe, Tim Logan writes that MIT filed a mixed-use zoning petition for the 14-acre Volpe site in Kendall Square. Logan notes that the Volpe redevelopment is part of a broader push by MIT to make Kendall Square, “feel more like a fully-fledged neighborhood.”