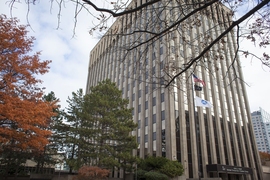 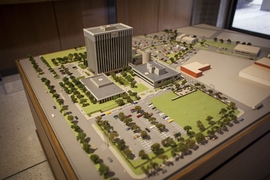 On Tuesday, the U.S. General Services Administration (GSA) announced that the federal government has made “the initial selection of Massachusetts Institute of Technology (MIT) as the Exchange Partner for the Volpe Project. The next step of the process will be the joint selection of the Design Team by the federal government and the Exchange Partner for the new federal facility.”

Israel Ruiz, MIT’s executive vice president and treasurer, spoke with MIT News about what the government’s announcement may mean for MIT and its role in shaping the future of the Volpe Center, a 14-acre federal property in Kendall Square. He also described what is now known about the path ahead, and the principles that will guide MIT’s involvement with the Volpe property.

Q. What is the Volpe Center, and what steps brought us to Tuesday’s announcement?

A. The John A. Volpe National Transportation Systems Center, part of the U.S. Department of Transportation, sits on 14 acres in Kendall Square, near MIT. Located across Broadway from the Boston Marriott Cambridge, the property is primarily bounded by Broadway, Third Street, Binney Street, and the Mid-Block Connector.

In 2015 the GSA — the federal agency that constructs and manages buildings for the government — invited bids to develop a new federal building on the site to house the Volpe Center; in return, the successful bidder would recover its costs by redeveloping the remainder of the parcel. The new federal building would replace the 375,000 square feet now scattered across six buildings on the Volpe Center property.

A number of entities, including MIT, submitted bids. On Tuesday, we learned from the GSA that it has made an initial selection of MIT as its partner on the Volpe Center site.

Q. Why is MIT interested in the Volpe Center property?

A. Our bid reflects two guiding principles that President Reif has articulated and is advancing: our desire to foster Kendall Square’s growth into one of the world’s most compelling innovation districts, and MIT’s longstanding efforts to help make sure that technologies created on our campus can reach the marketplace and make a positive impact in the world.

Naturally, MIT is interested in the future of the site, given its proximity to campus and the important role it plays in supporting the evolution of the innovative, mixed-use community in Kendall Square. The revitalization of the Volpe parcel is a tremendous opportunity for the City of Cambridge and the growing Kendall Square innovation ecosystem.

MIT has made concerted efforts to foster the advancement of Kendall Square — both in service of the Institute’s own entrepreneurs and to maintain the very special innovation ecosystem in Cambridge. The Institute has taken a series of steps over decades to foster the full entrepreneurial life cycle, helping to move research out of the laboratory and into the marketplace: Most recently, on Oct. 26, we launched The Engine, MIT’s new enterprise to support startups that are working on scientific and technological innovation with the potential for transformative societal impact.

Through these longstanding efforts to support entrepreneurship, we have learned much about what is needed to support an innovation ecosystem — and the knowledge that led us to recognize the need for The Engine will now inform how the Volpe property can best be used to further cultivate a robust innovation ecosystem in Kendall Square.

Last but not least: MIT’s engagement with the Volpe property will allow us to further help shape our neighborhood — which we expect will provide long-term benefits for our industry collaborators, our neighbors, and for the Institute itself. Tuesday’s announcement reflects MIT’s success in competing in a commercial arena and in producing a commercially viable bid. While we don’t anticipate that the Volpe property will house academic buildings in the near term, it’s important to note that the long-term proceeds from our successful bid will support the Institute’s academic and research enterprise for decades to come.

Additionally, we fully expect that a developed Volpe parcel will contribute to creating an even more exciting Kendall Square region for members of the MIT community to live and work.

Q. What are the next steps?

A. We are following the lead of the the federal government, which has instructed us to maintain the confidentiality of our bid and the process — so we cannot share details of our bid, which we formulated with the advice and approval of the Executive Committee of the MIT Corporation.

We intend to engage MIT faculty, students, and staff in this process; Provost Marty Schmidt is now working to create a mechanism for the MIT community to offer input. We are also enthusiastic about working with the city, and with the Cambridge community, in the months ahead on the development of the Volpe property. Ultimately, the redevelopment will require a rezoning of the entire parcel and a planning process involving the Cambridge City Council and Planning Board.

As we begin this process, I can share a few guiding ideas — honed through MIT’s recent engagement with the city and with our neighbors as part of MIT’s ongoing Kendall Square Initiative.

We learned a great deal through our Kendall Square Initiative process about how best to integrate the desires of the neighborhood, the business community, and the MIT community. We see the tremendous contributions that dynamic street fronts, good retail, conveniently located housing, and active open space can bring to mixed-use developments, and we plan to follow that same framework as we envision the future of the Volpe site with our city and neighborhood colleagues.

A key objective for us will be to build on all of the good work that has already taken place in Kendall. We understand and agree with the city’s overarching vision around the creation of vibrant mixed-use places that foster authentic connectivity and collaboration.

We feel very fortunate that the city has already been taking a close look at the future of the Volpe site through extensive planning efforts over the past few years, and through the establishment of the Volpe Working Group several months ago. We look forward to working with that committee once we have a greater understanding of the process ahead.

I believe that MIT has been a good and strong partner with the broader community in Kendall, and I can say with certainty that we will endeavor to continue in that same manner as we work collectively to embrace this incredibly important opportunity for Cambridge and MIT.

We have learned that great places require strong collaboration and creative thinking, and we are extremely excited to advance this process in that spirit.