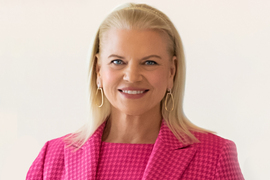 Virginia M. “Ginni” Rometty, a business leader and champion of diversity in the workplace, will serve as the next MIT Visiting Innovation Fellow for the coming academic year.

Formerly chairperson, president, and CEO of IBM, Rometty helped streamline the company’s portfolio by transforming it into a leader in AI, hybrid cloud, and quantum computing, both within the company and through acquisition. Under Rometty’s leadership, IBM acquired 65 companies, including Red Hat, a provider of enterprise open-source solutions, which was the largest acquisition in the company’s history.

During her MIT appointment, Rometty will focus on advancing women in STEM and in entrepreneurship, as well as on bolstering ethics and responsibility in a digital age.

"The Visiting Innovation Fellowship brings to campus thoughtful, visionary leaders to inspire and educate the next generation of entrepreneurs and innovators. Ginni Rometty is just such a leader, and I am delighted that our entire community will have this opportunity to learn from her,” says MIT President L. Rafael Reif. “Ginni believes deeply in MIT’s mission, and she has been a wise and insightful advisor to me and others on our campus. We are honored to welcome her to MIT.”

The MIT Visiting Innovation Fellows are part of MIT’s Innovation Initiative, which collaborates with all five of MIT’s schools and the MIT Schwarzman College of Computing. The Innovation Initiative provides the knowledge, tools, and the ecosystem needed for alumni and students to move high-potential ideas “from conception to impact” and generate important local and global innovations.

Visiting Innovation Fellows are drawn from policy, corporate, risk capital, and entrepreneurial settings. In their role, fellows often interact with the MIT community by convening events, lectures, and one-on-one sessions with student entrepreneurs and others seeking to engage more deeply with innovation practitioners.

The human component at the core of tech issues

Describing her interest in the Visiting Innovation Fellowship, Rometty says, “MIT understands that the future lies at the integration of tech and business — but it also understands the human element that’s at the core of these issues. Research in these areas, like AI and cybersecurity, is incredibly urgent for our economy and our society — especially in light of the changes we’ve seen during the pandemic.”

“At IBM, we shared a belief in the fundamental promise of technology: that when we apply science to real-world problems, we can create a tomorrow that is better than today. I’m looking forward to further advancing that mission during my time at MIT,” she adds.

Rometty is already familiar with the Institute after serving as a member of the MIT Presidential CEO Advisory Board. She was also a member of the advisory board for the MIT Task Force on the Work of the Future, a two-and-a-half year effort aimed at understanding how emerging technologies are changing the nature of human work and the skills required, and exploring how we can design and leverage technological innovations for the benefit of everyone in society.

MIT Provost Martin A. Schmidt says Rometty’s background and experience dovetail well with MIT’s innovation goals. “Ginni Rometty embodies the essence of MIT’s innovation mission for the campus and the world, and we are honored to welcome her to our community,” Schmidt says. “Her extensive work to strengthen job readiness, address ethics and privacy challenges in computing, and build a diverse and inclusive workforce will help inform how to efficiently and effectively prepare workers for the future and move innovation from ideas into real-world solutions.”

During her eight years at the helm of IBM, Rometty was also known for her work in championing diversity and inclusion.

“You cannot be what you cannot see. It’s important for women, communities of color, or any group to have role models to see what’s possible,” Rometty says.

One of her proudest accomplishments was taking action around diversity initiatives, she says: “I knew it was my responsibility as CEO to break down systemic barriers that keep people out of the workforce and deny economic opportunity.”

While at IBM, Rometty championed a global movement sometimes referred to as “skills first,” which is a paradigm that hires new workers based on their skills and aptitude, not just their degrees. These “new collar workers” represented 15 percent of IBM’s new U.S. hires during Rometty’s final year at IBM.

“Economic opportunity is the best equalizer. At IBM, we invested in recruiting and training new collar workers to take on valuable, tech-based jobs that don’t require a traditional four-year degree to start, but do require the right mix of skills,” Rometty says.

IBM also saw the growth of its Pathways to Technology Early College High Schools, or P-TECH programs, a global education model co-designed with the New York City Department of Education and the City University of New York that now operates about 200 schools in the United States and another 100 across the globe.

“Now, I’m proud to serve as co-chair of OneTen, a coalition that aims to close the opportunity gap for Black talent in America by hiring and advancing 1 million Black Americans, who have skills but not college degrees, into family-sustaining careers over the next 10 years. We are building a skills-first, versus degrees-only movement across the country and the world,” Rometty says.

Fiona Murray, associate dean for innovation and inclusion, says that priorities like these are valuable to MIT’s community. “As CEO, Ms. Rometty deepened and extended IBM’s core capabilities in critical areas of deep technology and also created new workforce training pathways for the 21st century. Her particular commitment to actively supporting leadership roles for those in historically marginalized communities aligns with important ongoing research and Institute priorities. MIT’s students, especially those involved in innovation and entrepreneurial activities, will benefit from her kinds of visionary insights as they launch, scale, and grow their own companies and teams.”

Rometty also serves on several boards including at JPMorgan Chase and the Brookings Institute. She is a member of the Tsinghua University School of Economics and Management Advisory Board.

Rometty has a bachelor of science degree with high honors in computer science and electrical engineering from Northwestern University, where she also awarded an honorary degree.

Rometty will give the closing keynote address at the virtual Tough Tech Summit on Oct. 27.

Industry, labor, and education leaders discuss the work of the future