Adding depth to the popular discussion of transgender rights 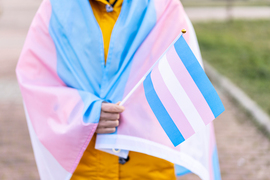 In 2016, the state of North Carolina passed bill HB2, a controversial measure that barred most transgender people from using multiple-occupancy public restrooms.  The legislation mandated that access for people was “based on their biological sex,” and relied on a particular and contested definition of gender, namely, “the condition of being male or female” as stated on a birth certificate.

North Carolina did not seem to have a surfeit of restroom-use problems prior to 2016, and its law has not been replicated by any other state. Still, politicians elsewhere continue to tout HB2-style legislation, and transgender people’s rights remain heavily politicized. On this front, the battle to inscribe values into law often involves defining gender in the first place.

“Competing definitions privilege different values and interests,” says Edward Schiappa, the John E. Burchard Professor of the Humanities at MIT and author of a new book about public disputes over transgender rights.

The book, “The Transgender Exigency,” is published in print form this month by Routledge. MIT Libraries has provided funding to make an open access version of it available as well. In the book, Schiappa examines transgender rights debates in multiple domains — education, sports, restrooms, the military — with a focus on the way varying definitions of gender and transgender identity have emerged.

Schiappa, who considers himself an ally in the struggle for transgender rights, developed the work to broaden public understanding of these rights disputes, even — or especially — if a policy resolution in these areas is not imminent.

“The main point of the book is not to provide final answers,” Schiappa says. Instead, he says, he wants to provide “a framework with which to understand competing regulatory definitions more thoughtfully.”

Schiappa is not part of the transgender community, which he acknowledges limits his perspective on the subject. But he has long been interested in LGBTQ+ rights and has previously researched public debates over the legal definitions used to categorize people.

“It is important to make clear that I do not pretend to speak for the transgender community,” Schiappa says, who is mindful of the saying sometimes used in the community, “Nothing about us, without us.” Referencing the philosopher Linda Alcoff’s influential 1991 journal article, “The Problem of Speaking for Others,” Schiappa adds: “I am aware that I speak from a position of privilege, even if I cannot be aware of all the ways my training and previous research limits my field of vision.”

Even so, Schiappa notes, many activists and scholars (including Alcoff) have contended that those not experiencing oppression can still engage in effective advocacy about it. Schiappa says he feels a responsibility to do so.

“We certainly can’t expect opponents of trans rights to remain silent, so allies need to speak up,” he says.

“The Transgender Exigency” focuses on three approaches to defining gender. One view regards gender assignment as a biological given with two clear categories: male and female. Another view holds that transgender status is a matter of self-identification. A third perspective focuses on the ambiguities and complications of gender categories. To some, those complications are a straightforward scientific fact (such as some people having physiological characteristics of both sexes), while others see science and medicine themselves being shaped by societal forces. Either way, in the third view, such complexities resist binary classifications.

To see some of these competing definitions at work, consider the admissions policies of single-sex colleges. Since 2014, about two-thirds of the 39 institutions in the Women’s College Coalition have crafted policies formally admitting transgender women. Most of those schools, in turn, require applicants to self-identify as women (with some requesting an established duration of self-identification).

Still, two of the four remaining men’s colleges in the U.S. have gone a different route, and regard gender as a binary, biologically-based matter. Schiappa suggests the larger institutional missions of schools explain much of this variation.

“Women’s colleges that admit trans women see solidarity among women as part of battling discrimination, and thus see their mission … as consistent with admitting both cis and trans women,” Schiappa observes. “In contrast, the two men’s colleges that still do not allow trans men to apply seem to be wedded to a biological definition of sex that is fueled by the desire to ‘protect’ a vision of traditional masculinity.”

A seemingly even more complex situation emerges in the realm of sports, where women were long denied competitive opportunities — only 7.5 percent of high school athletes were female in the 1971-72 academic year, when the U.S. introduced its Title IX legislation requiring equal funding of sports by gender in public schools. Since then, given more chances to train and compete, women have eliminated much of the performance gap with men in many sports.

But not all of that gap has vanished, and current evidence suggests men have physiological advantages allowing them to perform better on aggregate. This complicates acceptance of transgender women into women’s sports. Because sports are generally organized to produce close levels of competition, some transgender women could have physiological advantages over other female athletes.

“You have, combined, the history of wanting to correct a historical wrong — discrimination — plus the need to keep sports fair, competing with the desire to treat trans athletes with respect,” Schiappa observes.

One way forward, he says, might include a split in approaches between K-12 level sports, where policies could prioritize inclusion, and elite-level sports, where certain physiological markers, such as testosterone levels, may be used in the long term to define eligibility for gender-based groupings. Even so, Schiappa notes, U.S. states are “increasingly polarized” about K-12 eligibility policies, something that “eventually may be resolved in the courts.”

One size may not fit all

Other scholars active in the field have praised Schiappa’s book. Deirdre McCloskey, a distinguished professor of economics, history, English, and communication at the University of Illinois at Chicago and a prominent transgender scholar, calls “The Transgender Exigency” a “warm, scholarly, humane, and readable book” that “brings the discussion of trans rights and responsibilities to a higher level. But perhaps more significantly, it raises, too, the level of the discussion about definition itself.”

One theme emerging from that discussion, in Schiappa’s book, is that attempts to craft a single overarching definition of transgender status are likely ill-advised or unrealistic — as the differing examples of higher education access and sports suggest.

“For the foreseeable future, it is neither necessary nor possible to devise a ‘one-size-fits-all’ definition that will meet all our needs at all times and in all contexts,” Schiappa writes in the book.

Schiappa largely shies away from firm forecasts about the future of transgender rights. Still, he suggests that some of the current policy battles are fairly predictable ploys in cultural politics. Politicians use the issue to stir up voters during campaigns but don’t follow through with actual legislation — possibly due in part to the fallout from North Carolina’s HB2, which cost the state an estimated $400 million in lost concerts and sporting events.

“We will probably hear more about bathroom bills in upcoming election years, then they probably will be dropped,” Schiappa says.

Overall, after looking at the public debates across society, Schiappa says he has come to regard self-identification as an important way to define transgender status — a firm starting point for policies in education and other realms that respects autonomy, unless or until solid rationales to think otherwise emerge.

“The further we move away from a default option of self-identification,” Schiappa notes, “the more compelling the justification needs to be. Such decisions need to be context-sensitive, obviously, but it is important that we get it right, as lives are in the balance.”

3Q: Suzy Nelson on protections for transgender students at MIT